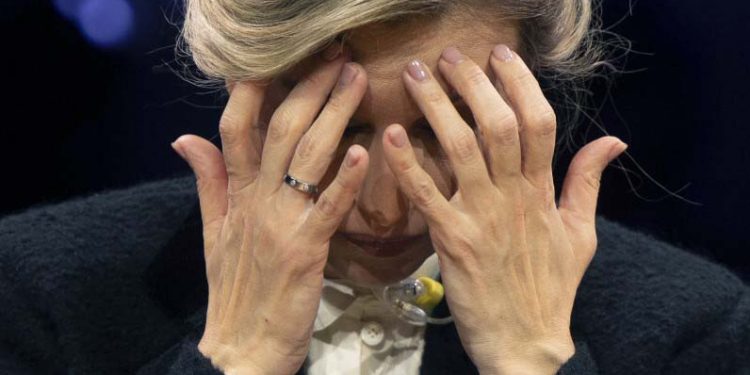 Ukrainian first lady Olena Zelenska spoke at the Frankfurt Book Fair on Saturday about the horrors faced by Ukrainians amid the Russian invasion and her hope for the future.

“We are fighting for our lives,” she told the audience at an event organized by the German women’s magazine Brigitte.

There were Russian airstrikes in Kyiv again on Saturday, she noted, saying she could not help but be concerned for her two children.

“Our planning horizon is maybe a day or two – we don’t know what tomorrow is or the day after tomorrow,” she said.

At the same time, Zelenska said, a certain routine is setting in: “The heart doesn’t race as much when the sirens are blaring. We go to the shelter.”

The Ukrainian first lady described the search for normalcy despite the effects of the war – for example, she said, her daughter has begun her studies.

“We are constantly in other places – the children have rarely seen their father but they talk on the phone every day.”

Zelenska was in Frankfurt in part to help launch a book advocating for better inclusion of people with disabilities and injuries.

She said the topic becomes more important with each passing month of the war.

“We need to think about rebuilding right now,” she said, adding that she hoped schools would be rebuilt so they had ramps for wheelchairs.

What we just learned about China’s economy