What we just learned about China’s economy 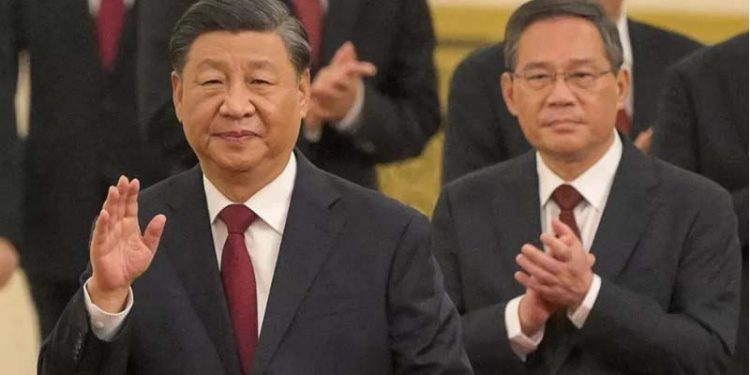 The spotlight was also on the man named as his new second-in-command, Li Qiang.

A loyalist to Mr Xi, he is now on track to become Premier and tasked with managing the world’s second largest economy.

Meanwhile, on Monday, China released a set of economic figures which had been postponed from the previous week.

China’s economy faces a number of challenges at home and abroad – including Beijing’s zero-Covid policies and the trade conflict with the US.

What have we learned about the state of the country’s economy over the last week?

On Monday, stocks in Hong Kong slumped and China’s currency, the yuan, weakened against the US dollar over heightened concerns that Mr Xi will continue with his ideology-driven policies at the cost of economic growth.

It marked a strong bounce back from the 0.4% growth seen for the previous three months, when Shanghai was in lockdown.

The release of the figures was postponed during the congress, with no reason given for the delay. That caused some China watchers to suggest that they may point to weakness in the economy.

“The 20th Party Congress did not reveal any new directions in economic policy. Whether the overall economic approach will deliver the type of growth that China desires remains to be seen,” Bert Hofman from the National University of Singapore’s East Asian Institute told the BBC.

However, while the latest growth figures may seem high compared to most Western economies, they are far below the rate of expansion China has seen for decades and still some way off the 5.5% 2022 target set in March.

Since then, the Politburo – the ruling Chinese Communist Party’s top policy-making body – has signalled that it may miss that target, after major cities were put into full or partial lockdowns.

Some observers say Mr Xi’s picks for the Politburo Standing Committee – China’s equivalent of a presidential cabinet – showed that he prizes loyalty over expertise and experience.

His choice for the new second-in-command of the party was Li Qiang.

He is expected to become China’s Premier next year and take on the role of managing China’s economy, even though he does not have any working experience in the central government.

However, he has been closely involved in managing the local economies of Zhejiang province and Shanghai and played a key role in the set-up of a massive Tesla factory in Shanghai.

“Keeping that in mind, Li Qiang would actually be a perfect candidate for the job. He is also a strong supporter of President Xi, that means the decision making process will probably be way more efficient than before, given that those decisions are the correct ones,” Dan Wang, chief economist at Hang Seng Bank China said.

Nick Marro from the Economist Intelligence Unit (EIU) said “the dilution of that previously balanced relationship between the Premier and the president will continue under Xi’s third term. But the erosion of these internal checks-and-balances will worsen the risks and consequences of policy drift.”

The Premier is second-in-command of China’s ruling Communist party. They play a major role in managing the economy by co-ordinating the work of government ministries and the central bank.

Li Qiang’s predecessor, Li Keqiang – who is viewed to be a more moderate voice, has been in the position for close to a decade and is now expected to retire after his current term expires next March.

Before the congress, there were hopes that China could ease its strict zero-Covid policy, which has hampered economic growth.

A day before the event got under way, Communist Party spokesman Sun Yeli expressed support for the policy and said “We firmly believe that the light is ahead and perseverance is victory.”

These sentiments were echoed by Mr Xi in his opening speech. He said Beijing had launched a “people’s war to stop the spread of the virus” and “protected the people’s health and safety to the greatest extent possible”.

“It is well known that China is planning to reopen, and it will stimulate the growth of trade. China is trying to juggle a middle ground between control and growth. It is not either or,” she told the BBC.

Meanwhile, Dan Wang from Hang Seng Bank believes “There is a general consensus that this policy will stay for the long haul.”

“For the Chinese government, there is pretty much no tolerance to see a higher-than-zero death rate that is directly caused by Covid,” she said.

Not going it alone

There have also been growing concerns that China would move to close itself off from the global economy.

One of largest hurdles China faces is its “fraying relations” with the US, Mr Marro from the EIU said.

“The recent US export controls pose an existential crisis not only to China’s technology ambitions, but also parts of its domestic tech sector. It will be hard for China to surmount these challenges, given that many of these tie to… fundamental differences around human rights and democratic values,” he added.

However, speaking on Sunday, Mr Xi said his country was committed to remain open to international trade.

“China cannot develop without the world, and the world also needs China”.

“After more than 40 years of unflagging efforts towards reform and opening up, we have created