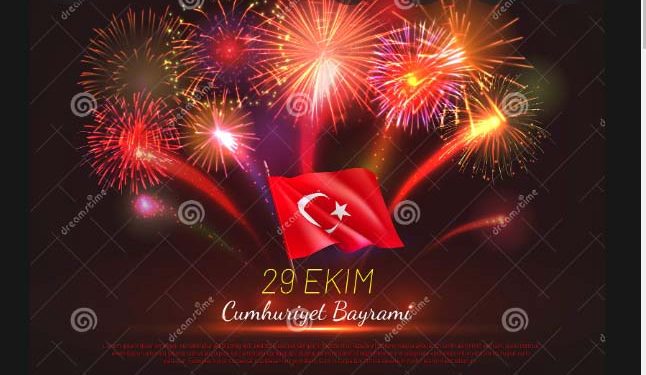 The entire nation is gearing up to celebrate in a grand manner.

Every year on October 29, Türkiye Republic Day is commemorated as a holiday. The commemoration of the event is celebrating its 99th birthday this year. The festivities start at midday on October 28 and last till the next day. The Grand National Assembly of Türkiye was founded on April 23, 1920, and Türkiye has been a republic ever since; however, official recognition didn’t occur until 1935. On October 29, 1923, Mustafa Kemal Atatürk, who was subsequently chosen as the nation’s first President by the Grand National Assembly, proclaimed the nation a republic. Sincere tributes are paid to the founding father of the republic during the festival.

The Turkish War of Independence against the occupying Allied Powers resulted in the Sultanate’s abolition on November 1, 1922, and the Treaty of Lausanne’s signing on July 24, 1923. On October 29, 1923, the newly recognised Turkish parliament proclaimed the establishment of the Republic of Türkiye, formally ending the Ottoman Empire. On the same day, Mustafa Kemal, the leader of the Turkish National Liberation War and later known as ‘Atatürk’ (father of Turks), was unanimously elected as the Republic’s first president. Türkiye became a secular, unitary, and parliamentary republic as a result of reforms initiated by the country’s first president, Mustafa Kemal Atatürk.

Türkiye had been a republic since the opening of the Grand National Assembly in Ankara on April 23, 1920. When the Turkish parliament met for the first time in 1920, the crumbling Ottoman Empire was occupied in nearly every corner by Allied forces. Türkiye was a key player in the Korean War and joined NATO in 1952. Several military coups took place in the country in the latter half of the twentieth century. The economy was liberalised in the 1980s, resulting in increased economic growth and political stability.

HOW TO CELEBRATE TÜRKIYE REPUBLIC DAY

What better way to celebrate than with a warm Turkish meal with friends and family? Look up recipes online and prepare a special occasion feast.

Book a flight to the Turkish city of Ankara. Ankara is significant in Turkish history because it was the site of the first Republic declaration. Ankara also hosts the most important celebrations, and you will undoubtedly feel the spirit of the Republic there.

Istanbul is situated on two continents: Europe and Asia.

Türkiye is the world’s largest hazelnut producer, accounting for 75% of global production.

Türkiye introduced tulips to Europe in the 16th century.

Türkiye’s “Tünel” is the world’s second-oldest underground railway, after the London Underground.

WHY IS THE TURKISH REPUBLIC DAY IMPORTANT?

Turkish people are extremely proud of their heritage and are eager to share the history and culture of their country with visitors. They are happy to tell you stories about their hometown’s history while showing you the sights no matter where you go.

Despite the fact that Türkiye is a modern country, many of its traditions and cultural characteristics have survived the decades. Everything from traditional dance and music to literature and art celebrates and preserves Türkiye’s past.

Türkiye is a country whose long and rich history has seen civilizations and empires, as well as diverse ethnicities and religions, leave their imprint. Türkiye has a lot more to offer than delicious food, beaches, and lively marketplaces. It has ancient sites that defy historical truths and the world’s second-oldest railway.

Below is an article then ambassador for Türkiye spoke about the bilateral relationship between the two countries during the 96th republic day celebrations held in Sri Lanka.

Bi Lateral trading between Türkiye and Sri Lanka on the rise

Bi Lateral and cordial relationship between Sri Lanka and Türkiye has grown ahead in a notable manner and the friendship between the two countries could usher more bilateral benefits pined by the Ambassador to Türkiye in Sri Lanka Tunca Özçuhadar at the ‘96th Anniversary of the Proclamation of the Republic of Türkiye’ celebrations held in Colombo, 29 October.
The Ambassador noted the magnitude of trade between the two countries in recent years indicated Türkiye is not a small trade partner to Sri Lanka any more.

Turkish Ambassador Tunca Özçuhadar welcomed the invitees and other dignitaries to the reception held in Galle Face hotels Colombo. Incidentally this happens to be the farewell gathering to the ambassador.
Having served over four years in Sri Lanka the outgoing ambassador bit ‘good bye’ to all his well-wishers, friends and other dignitaries with high nostalgic feeling. He thanked all for the corporation and support rendered to him during his stay in Sri Lanka which made his stay more homely and enjoyable.

The chief guest to the occasion was Minister Rishad Bathiudeen. Speaker to the Parliament karu Jayasooriya and ministers, parliamentarians and Ambassodors from other countries were present. Sri Lanka Air Force was in attendance during the ceremony.

Three more Sri Lankan athletes have gone missing in Europe as a result of the financial crisis.