Thilini Priyamali’s phone is a goldmine! Flavors galore! A video shows a politician who sneaked into a room with Thilini and was scammed for Rs100 crores! 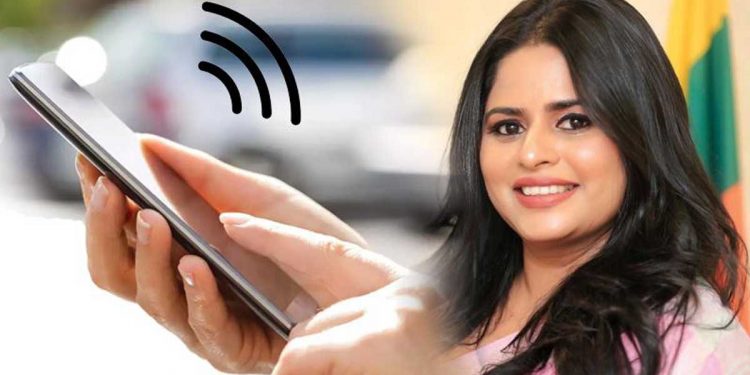 Thilini Priyamali, who in our country toyed with the secret money of unknown rich people and the black money of smugglers, has been dubbed “Queen of Charming Money.” Last week, Maitri Gunaratne, a well-known figure in our country, addressed her by this name in the Colombo Fort court.  She may have been given this name since many of the things she said and did with her beauty are already being revealed through Criminal Investigation Department inquiries.

At first, a bunch of information came out that she blackmailed businessmen who gave her money by using several famous actresses and models in this country. The related audio tapes also came out at the same time. But going beyond that, information is now being revealed that Thilini Priyamali has charmed many billionaires and powerful people with her beauty and image. It is through the analysis of her mobile phone and computer data. Among those who fell under her spell are politicians, police chiefs and many government officials. She scapegoats these people to create the environment she wants to engage in fraud freely. Information about how she sneaked into the hotel rooms with those people and even about the sexual acts she did in those hotel rooms is already emerging through the technical investigations conducted by the Criminal Investigation Department.

Unimaginable information is now starting to come out. “That’s what a senior officer of the police headquarters said about it.
This senior police officer says that information will come out about many people who fell on their knees to receive sexual caresses from her because of her figure.

Many people who were romantically involved with her are today as scumbags. Even though they are not intoxicated in sex with her in hotels, they fell in love with her figure and wealth and became very close friends with her. A lot of information about them is now coming out one by one, even including the clothes they are wearing.

Investigations conducted by the Criminal Investigation Department regarding Thilini Priyamali have shown that even some prominent politicians have given assurances to certain businessmen about Thilini Priyamali’s business. There are many businessmen who have lost crores by giving money to Thilini because of the recommendation of those politicians. Now they also know that those politicians were caught in Thilini’s trap.

It is currently being revealed that a manager of a multinational company in Sri Lanka has made the most recommendations to businessmen regarding Thilini Priyamali. She is a powerful woman in high society. There are many businessmen who have been victimized by Thilini Priyamali. Even a former governor, Asad Sali, publicly accuses Thilini Priyamali of being the one who put him in touch. Apart from a few people including Asad Sali, not many people come forward to complain against her, not even a word against her. The owner of a mobile phone shop on the Wellawatta area is among those who are sidelined. The said strong woman buys mobile phones from this young businessman. These two have known each other for a long time.

At a time when the Galleface struggle was at its peak, the businessman received a call from this lady who is a company manager and director. Saying that she wants to buy a brand new Apple phone for her friend. She even told him the type of mobile phone her friend was looking to buy. The said young businessman goes to this lady’s house with the mobile phone worth three to four lakhs. That’s because she told him to come home with the phone.

” For this one I wanted you to bring that phone ,” she told him, pointing to the beauty who was tying bundles of dollar notes.
She is the owner of a big company in Sri Lanka. you see how money flows to her” said the company director who was at home and introduced her to him.

Due to the Galle face struggle, they told me that they can’t keep money in their houses now,” Thilini Priyamali said at the same time.
But she did was a big lie. She wanted to attract this young businessman by showing that she had a close relationship with that politician.
All this money should be transferred as soon as possible. Saying that it is not possible to keep such a stock of dollars in the houses, she brings a proposal to this young businessman inviting him to buy some dollars. She told him that she could give some dollars at a lower price than the dollar was sold in the market at that time.

I will give you 50 dollars less than the normal market price” she said. The young businessman thought that getting 50 rupees less for a dollar was a good deal he received, and did not think twice about it. By pressing a few buttons on his mobile phone, he transferred Rs.50 lakh from his bank account to her account. At the same time, she also put a bundle of dollar notes in his hand.
Thilini Priyamali said, “If you need more dollars, tell me” and put her identification card with her mobile phone number in the hand of the young businessman.

This young businessman started thinking about this opportunity from that moment. For fifty lakhs, he had already received a stock of dollar notes worth sixty to seventy lakhs. That’s why he collected 05 crore rupees and called Tilini Priyamali with the aim of increasing the amount of dollars.
She also took the money from Lady’s house. But she didn’t give him the dollar this time. “Because the condition of the country is not good, the money is carefully hidden somewhere. You give me two days. I will bring the money to the place you say,” she said.
The young businessman had no doubts about Thilini Priyamali as he had previously made a deal of 50 lakhs. But in the end, Thilini Priyamali fooled him up beautifully and cheated him for 05 crore rupees.

Even today, the said young businessman has not gone before the Criminal Investigation Department. He is not even interested in complaining about this fraud and the cheating on him. That’s because he can’t imagine what happened to him. But according to what is known, in the next few days he will also go before the Criminal Investigation Department and file a complaint.

The investigations being carried out by the Criminal Investigation Department are clearly revealing that many of the victims of Thilini Priyamali’s fraud have identified her through the director of the said company. It is the same power that the characters have vouched for. The investigators of the Criminal Investigation Department have found that the company director Thilini Priyamali acted as a hidden character in this fraud. She was also in touch with Thilini for the business affairs of the company where she holds the position of director.

There is also a belief that this company director knows exactly what happened to the crores of money that Thilini Priyamali collected by cheating. Investigations have revealed that an amount of 300 crore rupees in Thilini Priyamali’s bank accounts between January and June of this year has suddenly disappeared. The Criminal Investigation Department has yet to find out what happened to that money. She spent most of her fraudulently obtained money on artists. That’s because she has strange audio tapes as well as videos of those artists. Investigations by the Criminal Investigation Department have revealed that the money she fraudulently collected has been given to artists as well as to various individuals and organizations. Among them, there are opposition politicians close to her as well as alternative current politicians.

Recently, Thilini Priyamali had tried to produce a film by gathering artists, businessmen and politicians of our country. For that, she had also organized a inaugaration ceramony. It cannot be said that the Muhurat Ulela was organized on the basis of a real need to produce a film. It has been revealed to the investigation teams of the Criminal Investigation Department that she had held a muhurat ceremony for the film “Maya Jala” last March with the aim of implicating politicians and businessmen. She even organizes the muhurat ulala for that as if Hollywood and Bollywood movies are not second to any of them. She had arranged to bring the Indian actress Moni Roy, popularly known as Shivanya among the people of this country, to attract more attention from the society. Among the guests at this Muhurat party held at the Shangri-La Hotel were powerful artists, politicians and businessmen.

It is said that she had spent more than two crore rupees for that Muhurat function.
The criminal investigation department will reveal to the country in the near future the identity of those businessmen who lost crores of money and lost crores of money by running a group company office on the top floor of the World Trade Center. That is because the investigations into how the money credited to Thilini’s bank accounts and even the computer system of her office are revealing many of those things. Even so, 05 hard disks contain many secrets related to Thilini Priyamali’s fraud were hidden are currently missing.

Those hard disks are missing due to the few days’ delay by the Criminal Investigation Department taking possession of the computer equipment in her office complex after the arrest of Thilini Primali. It is believed that those hard disks, contain many secrets, were stolen after Tilini Priyamali was arrested and remanded in custody. There is also a suspicion that those hard disks are disappearing according to an operation she did while in prison.
As revealed by the Criminal Investigation Department, she used three mobile phones during the first few days of her imprisonment. She made a call from one of the mobile phones to a director who worked under her in the office at the World Trade Center. To an employee reqested several phone numbers from him.
The Criminal Investigation Department now has the phone numbers that she requested from that director.
She called a director of her company from one of the 03 phones. The number of calls she has received from those 03 phones is 22. Out of those 22 calls, she has received 11 phone numbers. She called one of them and asked him to give 300 lakh rupees to get legal assistance to get bail. The criminal investigation department officials are still not releasing the identity of that person because that person has become an important evidence by now.

Analyzing the calls she received from the jail, it is also seen that even from the jail, she did not called normal persons. She has exchanged views about her release with a prominent lady in the society as well and among many prominent individuals. Officials of the Criminal Investigation Department are conducting some investigation regarding Thilini Priyamali’s followers and are ready to bring her before the law. This investigation has not yet been affected in any way. Regardless of what ever influence come their way, the officers of the Criminal Investigation Department are determined to carry out the investigation in the right direction.

Will Ranil use his arm to seize EC?