The Yuan Wang 5 to depart Sri Lanka on Monday (22) 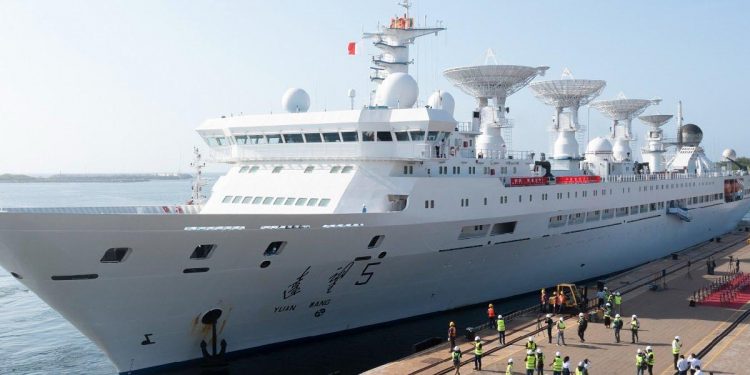 The Yuan Wang 5, China’s missile and satellite tracking ship berthed in Sri Lanka’s Hambantota port. The ship will depart at 4 p.m. today (22), according to the Harbour Master of the Hambantota Port to media.

On Tuesday, August 16th, 2022, one of China’s latest generation survey vessels, officially entered the Port of Hambantota. Purpose stated is for replenishment purposes.

In the midst of controversy, Sri Lanka granted permission for the high-tech Chinese tracking vessel Yuan Wang 5 to dock at the Hambantota Port.

The Sri Lankan Ministry of Foreign Affairs granted diplomatic clearance for the Chinese vessel to make a port call at the Hambantota port. This is for replenishment purposes from 11-17 August, 2022, However, due to concerns raised by various factions, including India, the Ministry requested China to postpone the visit of the ship.

However, the Ministry of Foreign Affairs provided no explanation for the request.

By the time the Yuan Wang 5 had already set sail for Sri Lanka. The ship departed its port on July 14th and was already in the Indian Ocean.

Following that, the ship slowed and moved over the Ninety East Ridge. This mid-ocean ridge on the Indian Ocean floor named for its near-parallel strike along the 90th meridian in the centre of the Eastern Hemisphere.

Sri Lanka’s Cabinet Spokesperson and Minister Bandula Gunawardena confirmed on August 16, 2022. Minister confirmed Sri Lankan request about the postponement. This is due to concerns raised by India.

He stated that request is made to postponed the visit until Sri Lanka addressed the concerns of its neighbor India.

This is a third-generation Yuan Wang Series tracking ship. It has advanced antennas and electronic equipment for tracking ballistic missiles and satellites.

The Chinese Research Vessel fleet consists of two vessels, this and Yuan Wang 6.