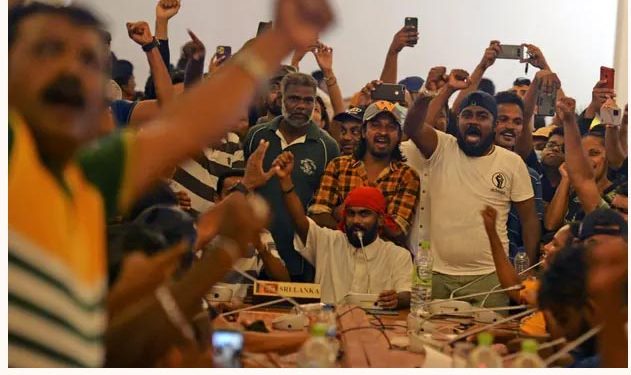 Sri Lanka’s been a joke for a while. At least for those compelled to live here. A deeply unfunny joke without a punchline. An island of uncanny beauty, blessed with an abundance of resources and a vibrant and literate population, Sri Lanka manages to produce ugliness on a consistent basis across a range of catastrophes.

The country has an unending supply of tragedy, absurdity and unorthodox cricketers, though it has run short of most other things – like petrol, gas, electricity, imports and competent leaders. As the economic crisis deepens, queues lengthen and prices soar, the output of jokes, memes, cartoons, skits, TikToks and fake news sites has been prolific.

It helps that each week brings new absurdities. On 9 July, the citizenry stormed the state’s buildings and ended up jumping in the president’s pool, bouncing on his bed and taking selfies on his many thrones. Days later, the president resigned by email, to be replaced by a six-time prime minister, repeatedly rejected by parliament and the electorate for the job he now occupies.

For the past few weeks, the populace has spent days and nights in petrol queues playing cards, singing songs and alternately cursing and sharing jokes about the bumbling leaders who got us here.

They range from parody songs and crude Photoshop jobs to sharply sketched cartoons and corny WhatsApp jokes. At the forefront, at least among English-speaking Twitter followers, is News Curry, an anonymous fake news factory reminiscent of the Onion. When the newly anointed president appointed a cabinet of zero women, the headline read, “I Empower Women – I Even Appointed One As My Wife”.

While the nation has seen wars, tsunamis and dictatorships, it has also seen beauty pageants where former queens storm the stage to confiscate the winner’s crown, parliamentary debates that descend into furniture-throwing brawls, a honey-based cure for Covid touted as an alternative to vaccines, and a floundering government placing more trust in astrologers than in economists during a debt crisis.

Sri Lankans smile for most things, which is frequently mistaken for friendliness by tourists and tourist brochures. While Sri Lankans are welcoming and hospitable at the best of times, the smile is more an attempt to save face and avoid confrontation. It’s a mask to hide confusion, contempt and anger, a tool to disarm an adversary and keep tensions from escalating. Though in recent times, Sri Lankan laughter is both a coping mechanism in crisis and an effective way of deposing tyrants.

During the Rajapaksa family’s first stint in government, from 2005-15, journalists who questioned the regime’s autocracy disappeared, like cartoonist Prageeth Eknaligoda, or were assassinated in broad daylight, like newspaper editor Lasantha Wickrematunge, or driven into exile, like Frederica Jansz, who reported on Gotabaya Rajapaksa, then defence minister, offloading a commercial flight to transport a puppy from Zurich. The white van abductions that followed dissenters became a meme in itself, though not a very funny one.

After the 2019 Easter attacks, the Rajapaksas were voted back in by 6.9 million, as populist strongmen who would keep Sri Lanka safe from terror, and as technocrats who would deliver “vistas of prosperity”. Many feared the Rajapaksas would double down on stifling dissent, baiting minorities, robbing state coffers and piling up debt. However, something was different this time.

The unstable coalition government from 2015 to 2019, based on good governance – or yahapalanaya – may not have delivered on the bulk of its promises. But it had restored free media and enabled free speech. Perhaps this emboldened Sri Lankans to poke fun at the regime they previously feared. The blatant nepotism, the tone-deaf populism and the staggering incompetence were mocked by hit theatre shows like Feroze Kamardeen’s Puswedilla series; the debt crisis was satirized by YouTube sketch comedians Bloc and Dino; and the day-to-day absurdity was made fun of by political cartoonists in broadsheets, opinionated morning radio hosts and hundreds of anonymous meme-makers on social media and messaging apps.

A depressing truth lay beyond the caricature. How could a man unable to say the word crow pronounce bigger words such as debt restructuring, bridging finance and austerity measures, when negotiating with the International Monetary Fund?

News Curry is predictably coy about who and how many they are. “We are the voice of reason or treason, depending on who’s doing the laughing,” they say in an online exchange. “We are anonymous for security reasons and to prevent the state from having the last laugh.”

These days, it is difficult to tell the difference between News Curry headlines and actual ones, like “No more nepotism, says MP Namal Rajapaksa” – nephew and son of two former presidents.

In the tough months ahead. Sri Lankans may draw strength from their ability to grin at tragedies and laugh at their fears. Though perhaps it is also time to get serious about reform and recovery. To elect a new generation of serious men and women with serious solutions, and to give the jokers a rest.

Shehan Karunatilaka’s novel. The Seven Moons of Maali Almeida is longlisted for the 2022 Booker prize

we have a small favour to ask. Millions are turning to the Guardian for open, independent, quality news every day, and readers in 180 countries around the world now support us financially.

We believe everyone deserves access to information. The information that’s grounded in science and truth. The analysis rooted in authority and integrity. That’s why we made a different choice: to keep our reporting open for all readers, regardless of where they live or what they can afford to pay. This means more people can be better informed, united, and inspired to take meaningful action.

In these perilous times, a truth-seeking global news organisation like the Guardian is essential. We have no shareholders or billionaire owner, meaning our journalism is free from commercial and political influence. – This makes us different. When it’s never been more important, our independence allows us to fearlessly investigate, challenge and expose those in power.

The Yuan Wang 5 to depart Sri Lanka on Monday (22)

Sri Lankan Tamils in Germany cheer Gotabaya Rajapaksa’s downfall, but not all will return