The United States , the United Kingdom, and the European Union have all urged Sri Lanka to update the PTA. 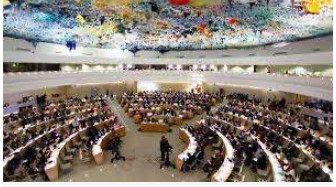 In order to comply with international human rights obligations and commitments, the United States, the European Union, and the United Kingdom all urged the Sri Lankan government to amend the contentious Prevention of Terrorism Act (PTA).

“The rule of law, equal access to justice, independent institutions, transparency, and accountability.” “The pillars of democratic systems,” said US Ambassador Michèle Taylor at the 51st Session of the Human Rights Council in Geneva.

We call for the protection of all human rights and fundamental freedoms. With the right to freedom of expression and assembly. “According to the rule of law and equal access to justice,” “We demand that those responsible for violence during protests be held accountable,” she said.

To safeguard fair trial guarantees and other applicable legal protections. It is crucial that the Prevention of Terrorism Act conforms to international human rights obligations and commitments.

As a crucial step toward better human rights. Sri Lanka must address its long-standing impunity and corruption. The United States remains committed to promoting justice, accountability, and reconciliation in Sri Lanka.

The delegation also queried the UN High Commissioner for Human Rights about how they could assist in fostering political reforms in Sri Lanka. that are representative, inclusive, and sensitive to the needs of all people, particularly those from marginalised communities.

The use of force against protesters is deeply troubling. In response, the UK delegation to the Council said. The UK delegation in Geneva expressed “deep concern” over the arrest and continued detention of protestors under the Prevention of Terrorism Act.

In response to HRC resolution 46/1, we say, “We regret the limited progress made on accountability and justice.”No progress has been made toward the domestic process of reconciliation and accountability that was supposed to be in place by 2020. The United Kingdom’s negotiating team has argued that the OHCHR’s efforts to collect and archive evidence are crucial.

They applauded recent pledges by Sri Lanka to ensure the rights of people of all religious and ethnic backgrounds. This is through political inclusion and constitutional reform.

Furthermore, they have stated that they are willing to keep talking to Sri Lanka and providing assistance. This would enable the country to implement its plans for accountability, justice, and reconciliation.

During the meeting, EU representatives voiced their disapproval of Sri Lanka’s excessive use of force against unarmed protesters. They demanded that the country suspend its Prevention of Terrorism Act. Bring it in line with international human rights law and standards. They urged the country to take immediate action to put an end to impunity.

“We appreciate the report from the High Commissioner’s Office. The EU expresses its gratitude for it. It is with renewed dedication that we stand for human rights, for peace, and for justice in Sri Lanka.

To that end, the European Union has issued a statement. It says, “The EU recognises the challenges Sri Lanka is facing following months of protest and the recent change of government.” Also highlighting the need to uphold all human rights and fundamental freedoms. Especially freedom of opinion and expression of all persons. Those in Sri Lanka, including people and groups in vulnerable and marginalised situations, We also stress the importance of ensuring that everyone’s economic, social, and cultural rights are met in a fair and equitable manner.

The European Union urges the Sri Lankan government to continue working with the United Nations and other international partners. Requests to provide full cooperation to the High Commissioner In terms of governance, rule of law, democratic values, devolution, and human rights, the EU will continue to back Sri Lanka’s efforts towards a fully inclusive dialogue.

Sigiriya is not a fortress! A leisure park! A new discovery from Harin’s Ministry of Tourism!

Fuel ships anchored over 22 days! no dollars to clear !Late fee rise up to a staggering amount