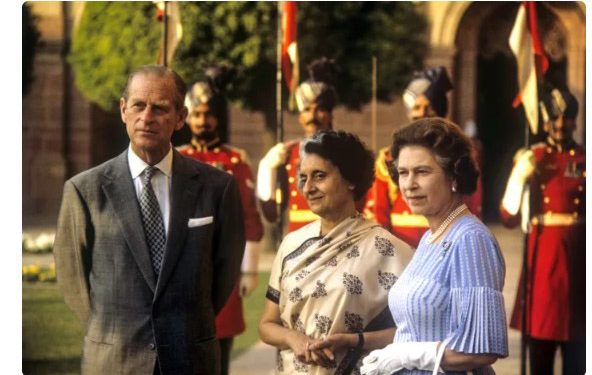 Just hours after the world learned that Queen Elizabeth II was dead, Twitter feeds across India exploded with angry demands for the repatriation of a precious diamond called the Kohinoor, which has become a symbol of Britain’s often bloody history of colonial conquest and rule.

The British government has denied stealing the Kohinoor diamond and has repeatedly refused to return it to India. And to millions across the Indian subcontinent, the diamond — one of the most famous in the world — has become a symbol of a colonial past.
The demands reflected anger over the history of colonization amid the outpouring of sympathy that followed Elizabeth’s death last Thursday at age 96. Among many residents of former British colonies, such as India and Kenya, the reaction to her death ranged from benign interest to anger and disdain.

At its height, the United Kingdom controlled the largest empire in history, ruling over an estimated 20% of the world’s population and occupying around a quarter of the Earth’s landmass. The era was marked by famines, massacres and grinding poverty in the resource-rich countries that were colonized by the British Empire.

In the shadow of New Delhi’s historic Red Fort, where the flag of newly independent India flew for the first time 75 years ago, Devishankar Shukla reflected on the British monarch’s death.

“Her majesty’s demise only reminds us of the independence struggle of all its colonies,” Shukla, who works in a clothing store, said.

“We’d rather mourn the loss of our freedom fighters,” he added.

Perhaps paradoxically, Elizabeth herself was viewed by most Indians as a “benign grandmother.” India held a national day of mourning Sunday, flying flags at half-staff on government buildings and canceling public entertainment. Earlier this year, the government had similarly declared a day of mourning for the assassinated Japanese Prime Minister Shinzo Abe and the United Arab Emirates ruler and president, Sheikh Khalifa bin Zayed Al Nahyan.
When informed that Indian Prime Minister Narendra Modi had declared a day of mourning, many dismissed it as an empty gesture.
“Lowering a flag isn’t mourning,” said Sameer Chaudhary, 50, a fourth-generation owner of a family-run bangle store in the capital.

It wasn’t all unmitigated criticism, though.

Swapan Dasgupta, a former member of Parliament who met Elizabeth when she visited India in 1997 and again in 2017 when he visited London, summed up the queen’s 70-year reign as “spectacular.”

In a telephone interview from his home in Kolkata, he said that the queen took her role as the head of the Commonwealth — a voluntary association of more than 50 independent countries that were former British colonies — “very seriously.”

Even though the queen had a “terrific” reign, Chaudhary said, she symbolized the cruel colonial institution that devastated India and other colonies for centuries. A series of famines in colonial India, the last of which, the 1943 Bengal famine, killed an estimated 3 million people, are seared on the collective memory of the country of 1.4 billion.

So, long after the British left, bitterness remains — not just because of the diamond, said Saumya Gupta, an associate professor of history at the University of Delhi. That Britain has been slow to acknowledge the deaths of thousands of colonial soldiers who fought for the crown as members of the British Army during World Wars I and II is also not forgotten, she says.

According to the British Library, of the 8.6 million men mobilized to fight in World War II, 1.4 million came from India and 134,000 from other colonies.

In the former African colony of Kenya, prominent journalist and political cartoonist Patrick Gathara outright dismissed the image of Elizabeth as a benign figure.

“It’s part of the whole global branding of the royal family,” he said on the phone from the capital, Nairobi.

“I think a lot of people did see the queen as this genial nice figure and a marker of high society, which I guess a lot of people aspire to,” Gathara added. “In Kenya, people also wanted to be part of this global movement of admiration.”

In Kenya, the ruling elites who were handed the keys to the country by the departing British decades ago declared three days of official mourning, while the rest of the African nation paid scant attention to the headlines coming out of London.

What many Kenyans don’t realize, Gathara said, is that Elizabeth was already queen when the British brutally put down the Mau Mau uprising in the 1950s that helped pave the way for the country’s independence in 1963.

“They put people in concentration camps, they murdered people, they tortured people,” he said. “I know she wasn’t involved in the day-to-day decision-making or what the colonial government was doing here, [but] the fact that she was silent about it — never once did she acknowledge it and never once apologized for it.”

The Mau Mau uprising was the most prolonged and violent rebellion against British rule since the region was colonized in the late 1800s. During the 12-year struggle that was eventually put down by the British, 12,000 people died and an estimated 150,000 Kenyans, many of them unconnected to the Mau Mau, wound up in those camps.

One of them was former President Barack Obama’s grandfather Onyango.

The British government didn’t admit to torturing Kenyans until 2012 when a London court ruled that three victims, including a man who had been castrated by the colonial authorities, could claim compensation for what they endured.

The British Foreign Office said it was disappointed by the ruling but chose not to contest it. As for Elizabeth, a survey of news articles found no indication that the queen ever apologized for the brutal manner in which the Mau Mau uprising was crushed.
Even in Britain, where Elizabeth is revered by many, there were mixed feelings about the queen among some whose families originally hailed from former British colonies — and are now part of what is known as the British Commonwealth.

“She’s all I knew for the past 57 years and I admired her,” said Micky Provost, 57, who lives in London, works in the fashion industry and whose family is from Jamaica. “But the issue of colonialism should be on the table for discussion. Because until it’s discussed more openly, people — especially the younger generation — will be more and more disagreeable to the royal family.”

When the British seized Jamaica from the Spanish in 1655, it turned the island into a leading sugar exporter and built a plantation economy of the backs of Black slaves brought there against their will from Africa. The slaves weren’t freed until 1838.

Zitha Moya, 48, who was born in Zimbabwe and immigrated to London in 1998, said she hopes King Charles III will drive a discussion about the dark past that his mother, Elizabeth, largely avoided during her 70-year reign. Moya’s homeland had once been a crown colony called Southern Rhodesia where, for more than half a century, the white colonial ruling class enriched itself at the expense of the Black majority.

“I think talking about it will make it easier for people to move on and move forward,” Moya, who works as a nurse, said. “If we pretend it didn’t happen and try to dampen it down, that makes it quite difficult to move on for a lot of people. But it is our history. It is what it is.”

Roshan Yapa, 38, who was born in Sri Lanka (also a former British colony) and now lives in London, agreed but said neither Elizabeth nor Charles should be called to account for abuses that were carried out largely in the name of their predecessors.

“I would first say that we are in the 21st century, so we can’t compare today’s monarchy with the old days,” the information technology engineer said. “The world has changed.”

But Charles now has a chance to push for real changes in the countries that were taken advantage of by British colonial rulers and that Elizabeth helped keep in the Commonwealth largely through symbolic gestures and the force of her personality.

“I think the Commonwealth countries and other colonial territories should be helped out and empowered, so those countries can become more successful,” Yapa said. “Britain could do more to improve working conditions in former colonies, that’s for sure.”

And yet, despite their misgivings about Elizabeth, Provost, Moya and Yapa were among the tens of thousands of people who descended Sunday on Buckingham Palace to pay their respects to a monarch who loomed so large in their lives.