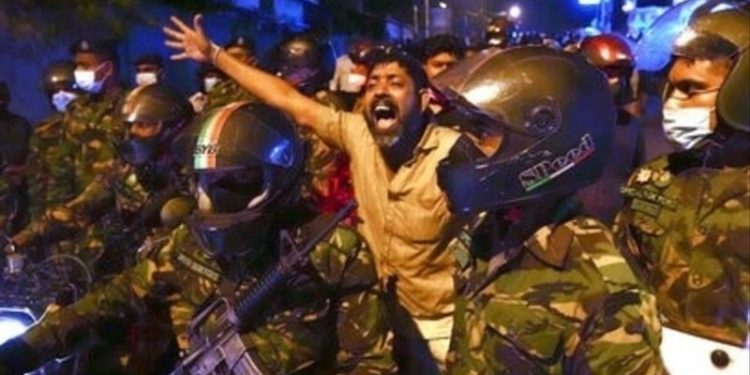 Just after midnight on July 21st, security forces in #SriLanka raided the main antigovernmental peaceful protest site & have begun pulling down tents. 100s of troops including the STF (Special Forces) moved on the protesters outside the presidential offices after the protesters had already agreed to leave the area.

The right to peaceful assembly is protected under the Constitution of Sri Lanka and the UN Declaration of Human Rights. This is being blatantly violated by the Sri Lankan government, under the leadership of Ranil Wickremesinghe.

Several innocent protesters (including minorities and people old and young) have been assaulted, arrested and abducted. Several media personnel, including foreign journalists & crews, have been attacked by security forces.

Sri Lanka needs your help! How can a nation build a better version of itself if we start this new chapter with police brutality against its people?

Sign this petition to support the lives of everyday Sri Lankans being put at risk by a government that is trying to silence opinions of the young, old and marginalized.

Sign this petition for the people that dream of a better Sri Lanka, without the fear of persecution, state backed violence and rampant corruption.

Sign this petition for the people in Sri Lanka who fear associating their name with this petition due to fear of retribution from the state for speaking out.

Will this petition itself make the change that needs to solve this situation? No! But, it will help raise awareness, show the peaceful protesters that we are watching and standing in solidarity.
They are supported by the World. The World is watching and the World will not stay quiet.

False claim by certain tv channel this morning! We are not for shuffling head game! SJB decides as a party! we are with our leader Sajith’s decisions! (VIDEO)