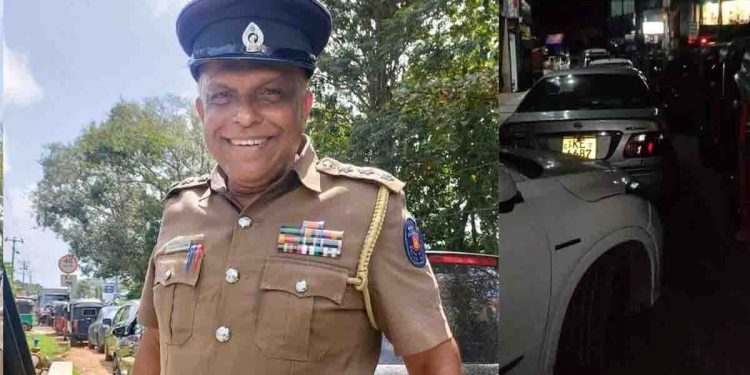 It is all too common these days to hear about riots or brawls at gas stations. Some people try to cut the line and get fuel, and the majority of the incidents are related to this. Despite daily reports of this nature concerning fuel stations, there are some good deeds that occur in the vicinity of these filling stations as well.

Most of the time, the good goes unnoticed because it is obscured by the bad side effects. Our goal today is to highlight and bring to light some of the good deeds that occurred in the aftermath of these incidents. We believe that doing so will help to instil good habits and actions in society.
Upul Dharmapriya posted a photo of a uniformed police officer on Facebook, captioning it “flower bouquet from the thugs in the queue.”

This is to recognize Mr. R.M.G. Ratnayake, the OIC of Ekala, Jaela police station, for doing a good deed. This incident had occurred on July 23rd at Jaela “Lora fuel station.” A large crowd had gathered here for the past three days, without adequate sleep or rest, waiting for a fuel bowser to arrive. Many of those present had been there for more than three sleepless days without leaving the fuel station.

This line stretched for about 2 kilometres. Some in the crowd claimed to be from the same neighborhood or town as those at the front of the line. They were three-wheel drivers who were also attempting to include some of their friends in the queue out of turn. After a while, the Jaela road was clogged with vehicles, causing unprecedented traffic congestion.

Due to the riotous actions of the aforementioned hooligans, the entire operation of the fuel station came to a halt within a few minutes. The police officer stationed there attempted to restore order, but he was unable to do so due to the unruly behaviour of the three wheel drivers.
By 11 p.m., the fuel-laden bowser had arrived at the filling station.

There were three queues for fuel at this point. It was discovered that some of them were secretly changing their vehicle license plate number. With all of this, the line began to move forward gradually. Meanwhile, two young people came to the queue that claimed to be the queue of the area residence and said…

The one in their group then said, ‘damn.. this is our village, our vehicles should get fuel first….’

After this response, the two young men left without saying anything. A speeding police jeep happened to stop there. OIC Ratnayaka got out of the vehicle and observed the injustice that was taking place by observing the difficulties that the people in the queue were experiencing.

.. how dare you skip the line… The OIC questioned the hooligans and charged them with a couple of baton blows.

The scattered queues all formed into a single queue in a matter of minutes, thanks to Mr Ratnayake’s prompt action, which was applauded by the thousands of people in the queue. If Mr. Ratnayake had not arrived at that point due to the illegal actions of the three wheeler drivers, no one would have been able to obtain fuel for their vehicles.

Despite the fact that the line was longer than on other days, people were able to obtain fuel thanks to Mr. Ratnayake. the OIC Mr. Ratnayake had made it a point to wait at the filling station and observe the entire fuel distribution that day until the last drop of fuel was released.

‘you will get huge amount of merit sir…’

ok ok take one then….

Mr Ratnayaka, with his unassuming smile, poses for the photograph. He exemplifies a dedicated office that is not prone to bribes and corruption.
No one would say anything about taking up the baton in the fight against injustice. Today, we come across police officers who have lost their heads as a result of the ranks they hold. What we hear and see is unequivocal. Officers of Mr Ratnayake’s caliber are a valuable ornament the police department possesses in such a corrupt lot.

Everyone should follow the rules of the country. This allows everyone to go about their social lives freely. However, if someone does not follow the law, the consequences are severe. A recent incident in the Borella police division is a good example of this. For stealing fuel from a motorcycle, a person was stabbed to death. Numerous reports of such heartbreaking insider information have been received from across the country. In the recent past, incidents such as selling fuel at a high price, steeling fuel, mixing water, and selling fuel were reported.

Analyzing all of these incidents, it becomes clear that no matter how much we talk about “system change,” it has not yet occurred. Fuel is being abused in some gas stations. Many fuel stations across the country distribute fuel to their friends and family. Suppressing the weak and letting the powerful win has been the norm throughout history. Some police officers abuse their authority by distributing fuel to their relatives. Many such incidents involving police have recently been reported using CCTV footage.

Mr Ratnayake, on the other hand, stands out among this corrupt bunch and deserves high praise. If we had such honest, courageous police officers in all police stations, citizens would have been a very law-abiding lot, and our country would have been a very pleasant place to live. People’s love and honor should be bestowed upon such officers

US Tamils urge U.S. not to arm Sri Lanka

Charles McGonigal — the former FBI official who has been arrested...