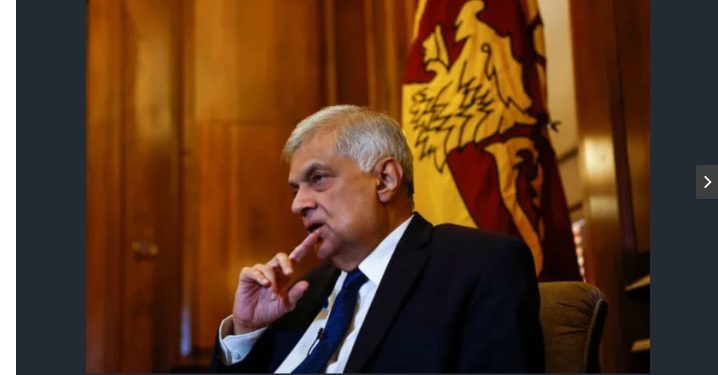 Andrew Fidel Fernanado writes: With little but his own political ambition to cling to, Ranil Wickremesinghe shows unnecessary force, aims cynical propaganda at the people’s movement, and generally attempts to cover himself with the heavy cloak of a strongman

As if acting out the first half-page of a “How to be a Despot” pocketbook, President Ranil Wickramasinghe  has spent his first weeks in Sri Lanka’s highest office beating down and rounding up protesters, while the nation continues to gasp for its barest necessities.

Not able to arrest en masse the multitudes who took to the streets on July 9, the president has taken to apprehending a cross-section of demonstrators, under the state of emergency he himself had ordered.

His targets have tended to be high profile — a YouTube star, trade and student union leaders, clergy, long-time activists, and a man who had appeared in a viral video where he’d counted the millions found at the Presidential Palace before handing the money over to police.

And then there is Dhaniz Ali, who was apprehended pre-takeoff on a flight to Dubai, weeks after he’d swaggered into the state broadcaster’s studios and forced producers to put him on air. Why was he not arrested before boarding the flight? Did his being dragged off an aircraft make for shareable social media content? Naturally.

Even before he’d been sworn in as president, Wickremesinghe called the protests a “fascist” force, so ostensibly the arrest of key demonstrators is an attempt to discredit and cripple a movement that had, among other demands, called for his resignation. But is there a larger political project at work?

As president, Wickremesinghe faces a grim reality. Masterful as his backroom manoeuvres have been over the past three
months, he is, in essence, running on political fumes.

Following the Easter attacks in 2019, Wickremesinghe was not merely unpopular, he was reviled for his part in failing to prevent the massacre.

His once-mighty United National Party was duly decimated at the next parliamentary polls. Wickremesinghe failed to win his own seat, coming into parliament only through the national list.

Now, his presidency is backed largely by the Sri Lanka Podujana Peramuna (SLPP), which is less a party in the traditional sense and more a vehicle for the ambitions of the Rajapaksa family.

There was a time when Wickremesinghe used to oppose the Rajapaksas vehemently, in public at least, though allegations of secret dealings have been rife for years.

He now makes attempts to convince an international audience that he is still “that” Wickremesinghe, chiding a Sky News reporter who told him he was a “friend of the Rajapaksas”.

But with his cabinet almost identical to that which had served under the ousted Gotabaya Rajapaksa, it hasn’t been lost on the Sri Lankan electorate, that he works hand-in-glove with the profoundly unpopular Rajapaksa family.

In fact, in this fresh autocrat avatar, this sometime globalist and human rights advocate has made attempts to occupy the political space the Rajapaksas were forced to vacate.

He has certainly entertained the rhetoric of the ethno-religious right, with his chief whip calling protesters “terrorists”, which is the standard-issue mortar Sinhalese-Buddhist politicians launch at political opponents, usually Tamils and Muslims.

What Wickremesinghe is attempting, however, is extraordinary for a politician with his history. For decades, he was the suit-and-tie wearing, international-minded, business-friendly liberal. Now a patsy of the Rajapaksas, he is wading into what, perhaps, he believes is political real estate he can claim for himself.

This, from a politician, who has repeatedly failed to connect with rural southern voters.

On his side, for now, are the predictable allies: Urban elites who had clutched their pearls when working class and lower-middle class youth stormed official residences and made peaceful fun in the kinds of luxury homes they may never enter again.

For the elites, this mere occupation of these emblems of power was an unacceptable upheaval of the natural order. Rural voters may not be his demographic, but elites are Wickremesinghe’s people.

In brutally breaking down the main protest site in front of the president’s office, less than 24 hours after his official swearing in, the new president sent a message to his longtime backers, as well as the protesters — he will not allow upper-class interests to be usurped.

Although they wield much power, perhaps Wickeremesinghe himself will know these are fickle friends. In the 2019-20 voting cycle, many among the moneyed had abandoned him in favour of Gotabaya, who at the time promised a technocrat-led state.

They left the Rajapaksa camp quickly when the economy plummeted, many of their own bottom lines also plunging.

They have returned to Wickremesinghe out of a misplaced fear of the bearded “masses”.

While some upper and middle-class problems have been solved since Wickremesinghe took power (a QR-code fuel rationing system having brought an end to long fuel queues, for example), lower down the class ladder, families battle to avoid ruin.

Fruits, vegetables, and staples cost three times what they did last year in parts of the country. Trishaw fares are far too expensive for many. Buses and train tickets are only barely within reach.

It is worth noting that while Wickremesinghe is a shrewd political manipulator, he has an appalling track record in governance. His last stint as prime minister was defined by the Easter attacks.

There are calls to push for fresh elections, to establish a mandate, or Wickremesinghe could cede power to parliament as D B Wijetunge (Sri Lanka’s last unelected president) had. He shows no appetite for either.

He sits for the foreseeable future in the most powerful seat in the land, unelected and unelectable, the caretaker figurehead of a party whose base has never been warm towards him.

With little but his own political ambition to cling to, he shows unnecessary force, aims cynical propaganda at the people’s movement, and generally attempts to cover himself with the heavy cloak of a strongman, hoping no one notices there is nothing underneath.