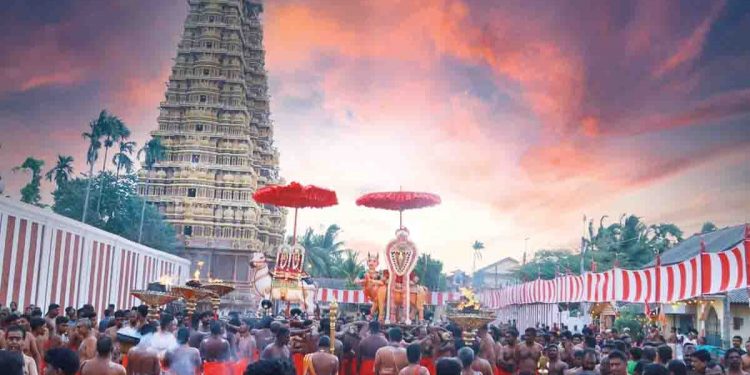 During a season where in the hill country glittering the street and pomp music of drums and devotees seek for rain for a prosperous harvest Our own brothers the Tamil community in the northern peninsula is celebrating the Nallur annual festival these days with great festivity.

During the hot months of August and September, the Nallur Kandaswamy Temple is filled with great devotion to its namesake Lord Murugan aka Lord Karthikeya. Devotees flock in lakhs and Jaffna vibrates with life and color. The festival, which unfolds for almost a month, begins with the flag-hoisting ceremony.

The flag is carried from an old aristocratic family home. Traditionally, this is carried in a small chariot. These are strictly traditional features that have not changed for centuries. The festival is marked by various rituals and traditions.

Daily the idol of Lord Murugan or his vel (a spear-like weapon) is carried around the inner precincts of the temple during the day and around the outer precincts in the evening.

Representations of the deity in procession, whether veils or statues, are accompanied by statues of Devasena and Valli, the two consorts of the deity. Every day the vehicles or chariots carrying the divine beings are different.

A silver peacock, a silver swan, a cobra and a green peacock are among other detailed vehicles. Kailasa vehicle is the truest of all vehicles. Colorful, glittering, intricate, massive, detailed and exquisitely sculpted, it attracts many viewers.

Among all the rituals of the festival, therya is the most popular. It is on this day that Lord Shanmuga along with his wives are seen on a silver throne carved by the then Nallur guardian in the year 1900. Called simmasanam, it is carried by hundreds of devotees with fervent shouts of ‘haro hara’. On the 24th day of the festival, the theertham or water-cutting festival is held.

Idols of Lord Murugan and his consorts are immersed in the temple’s beautifully decorated step pond. The final ritual that draws the curtain on the festival is the holy feast which re-enacts the marriage between Murugan and Valli and Murugan and Devasena.

Each of these rituals has spiritual significance and significant meaning. Among them, hoisting the flag means creation, procession of idols means protection and tirtha means benevolence.

Fasting, meditation and prayer as well as penance are believed to make one less worldly and more spiritual. Devotees perform these rituals with great zeal.
The annual festival at Nallur Kandaswamy Temple is a twenty-five day long commemoration recognized as the longest holy festival in Sri Lanka held in August or September according to the Tamil calendar in honor of the Murugan Temple in Jaffna.

The festival is based on the Nallur Kandaswamy Temple (Sinhala – Nallur Skanda Kumara Kovila) after Adi Amavasai.

Nallur festival is celebrated to worship Lord Murugan, Goddess Valli and Deivanai. The festival is always great. It is said that many saints resided in this temple and received the blessings of the Lord.

Therefore, everyone who steps into the temple feels a wonderful sense of comfort and reverence.
Traditionally, as a mark of respect, males above the age of 03 cannot wear a dress above the waist and females (above 03 years) must wear a long dress.

The Sri Lanka Nallur festival begins with the flag hoisting ceremony and the first 10 days are a series of religious ceremonies. Next 09 days will be around Nallur Kandaswamy temple and on 10th day Mancham festival will be held.

After this Arunagrinathar Festival, Suryotsavam (Sun Festival), Karthigai Festival, Santanagopala Festival, Kaliasavaganam Festival, Kayavallimahavalloy Festival, Thankaratam, Palani Festival, Orumuga Festival, Sapram Festival are celebrated. In this holy era, the idol of Lord Murugan is respectfully carried in the form of animals in venerable vehicles and transported throughout the festival.

Peacocks, silver and green, cobra and swan are all considered sacred to the holy spectrum. Gathering thousands of devotees to participate in this colorful spectacle, the Nallur Temple Festival in Jaffna moves from the inner temple premises at dawn and through the inner premises of the temple in the evening and into the night.

Ther festival is a chariot festival held on the twenty-fourth day. There the holy image of Lord Murugan is placed in a chariot amidst constant drumming and chanting. The vehicle Mangala which starts in the morning then reaches the temple gate again after finishing the ceremony. A huge and heavy chariot carrying the image of Lord Shanmugan and his wives is taken in procession through the streets of the temple.

Pulled by a rope of thousands of devotees, the rich and the poor, the old and the young pull shoulder to shoulder to witness the sincerity and purity of the devotees. Hundreds of devotees from the island and abroad come to participate in this festival.

They ritually throw themselves as well as coconuts to the ground in honor of their true commitment to their faith. On the streets, behind the cart, many devotees gathered to enjoy the Adi Bhajan song. On this day, bhajans, pannisai, arulisai, kathaprasanam and arulai are performed at the charity centers on Temple Road.

The festivities conclude after the chariot carrying the idol of Lord Murugan returns to its original place in the temple.

Tirtha is another day. Theertha (festival of water cutting) is the tirtha celebrating the expiation of sins. On this evening, the Sri Flag lowering ceremony will be held. After this, the Pungavanam festival, (the wedding of Lord Muruga and Goddess Valli and Deivanai will take place).

The festival ends with Vairavarshanthi. This is an important cultural and religious festival in the Tamil calendar and can witness wonderful cultural spectacles.

Rudraksha on men’s necks is a wonderful ornament. I would like to add another wonderful story about it.

Finding the teardrops of Lord Shiva in Tawadi, not far from Jaffna city limits….

There is no doubt that this is another wonderful destination to find the cultural roots of a lovely event in our motherland.
Thavadila is another event where you can explore the combination of rural beauty, splendor of Hindu culture, lifestyles and rituals of the peninsula on a limestone bedrock known as Sushka, adjacent to the main road of Jaffna Kankasanthura in this northern peninsula.

On the Kankasanthurai main road past Inuvil, the ‘Ambalavar Pillair’ temple with a front wall patterned with the thought of Neka Neka of Tavadi greets the visitor as an ‘avada ayubo’.

Living in Jaffna for many years, my eyes met the priests of the temples that aroused curiosity in me, as well as the roots of a wonderful ornament worn by the male side.

This destination is to explore the strangeness of another culture to see a blue shore plant near the ‘Thavadi Bhadrakali Temple’ When reflecting on the memory of the judge in charge of the temple, this is a plant that his father, who came to Sri Lanka from India when he was a child, planted a seed.

The blue shore seeds known as Lord Shiva’s teardrops or the seeds of the Rudraksha plant are considered to be the teardrops of Lord Shiva. When he finally awoke, tears fell from his eyes onto Mother Earth. It is because it was recorded in the book Shiva Purana that the tears that fell from the eyes became these plants.

‘Rudra’ is another name of Lord Shiva. ‘Aaksha’ is a drop of tears. This is the greatest treasure gifted by God to humans, used by the ancient sages as well as the yogis living in the present Himalayas to deal with God mentally, to visualize God, to live long and to develop spiritual strength.
According to the belief of Hindu devotees, the power of Lord Brahma, Ishwara and Vishnu is united here.

It is said that even the front of the crown of King Ravana, the great man of Hela, had a Rudraksha attached to it, and it strengthened his heroic prowess.

Rudrakshas are classified based on the number of faces formed by the edges. These are called Mukhis and the number of Rudrakshas divided into twenty one Mukhas is twenty one. Nirmukhi is also Rudraksha. Interlaced Rudrakshas are also. These also have separate presiding deities. Blessings can be obtained by offering sacrifices to each deity.

See you in another lovely event with the blessings of Lord Shiva….