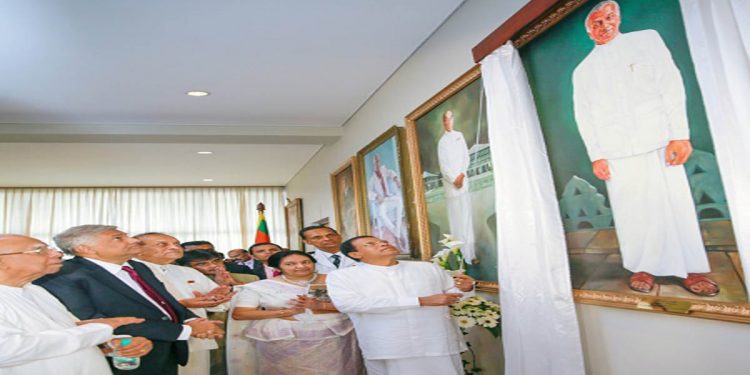 I am here not to add straw to the fire. I came to put out the fire…’

This is a part of the speech made by the third Executive President of Sri Lanka Dingiri Banda Wijetunge the leader of the UNP after he was swornin as the President. This address he made to the leaders of the party .D. B. Wijetunga was the Prime Minister of Premadasa’s government. He became the Acting President from the post of Prime Minister.

SLFP liked DB because he was not a controversial but a innocent figure in the government that came to power in 1977.Mrs. Bandaranayaka and many SLFP stalwarts thought the hatred Premadasa government had towards the opposition would be cooled down by DB. However, SLFP decided to allow DB to become president uncontested.

once he become the President DB was able to remover the ‘opposition hatread’ from the government. He removed Sirisena cooray from party general secretary position. He removed Soththii Upali from UNP activities. He launched a silent revolution within the government and within the UNP. Many media viewed this as DB has attained the ” ‘Samma Dhitti’.

The second person to appointed to be the president after the death or resignation of a president is Ranil Wickramasinghe. Before becoming the president Ranil became a primeminister during a time where country’s opposition including Samagi Jana Balawegaya, Tamil National Alliance. governments major alliance party SLFP Wimal, Gammanpila independent alliance were having discussions to appoint Sajith as the Prime minister in a all party government they proposed to form.

When Ranil was appointed as the Prime Minister all these opposed. Chief Prelates , and Cardinal did not wish to see Ranil as the Primeminister. More over the activist who were instrumental of the resignation of Mahinda as Prime Minister denounced this Ranil’s appointment. Selecting Ranil as the president and if Gota had formed all party government July 9th protest would not have happened.

If it had happened by this time could have reached a staff level agreement with IMF and could have steered the country to a fairly better position. Gota and Rajapakse family did not like forming a all party government Sajith as the Prime minister. They hurried and brought Ranil and administer oaths as Prime Minister. with Ranil’s assuming office as the Prime Minister the ‘aragalaya’ got more heated. This culminated with Gota fleeing the country and Ranil’s house getting enflamed.

When Gota left Ranil was to be sworn in but many thought when Premadas was killed as JR paved the way for DB to become the executive similarly president Gota would appoint Mahinda yapa Abeyawardene as acting president. There are many similarities between Mahinda yapa and DB. As DB Mahinda yapa too is not a controversial character. Not one who earned the wrath of the opposition and an not conflicted with the opposition. He is a shy and cool character like DB.

By this time IMF staff level negotiations would have finished if Mahinda Yapa had become the President and an all party government formed with a all party consenting Prime Minister.Mahind Yapa becoming the president to find solutions for the economic debacles and not to chase behind the activist, supress activist or to impose emergency regulations. it it had happened by now the government would be chasing behind Rajapaksa’s corruptions. Main objective of ‘aragalaya’ is that.

However, Mahinda yapa did not become the president. All party government or all party Prime minister was not appointed. Rajapakses make Ranil the Persident and Dinesh the Prime minister and demonstrated their power to the country and to the world. DB became president then and changed the Premadasa political culture. However today Ranil has become the President and practicing Rajapakse system better than Gota.

‘Rajapakse’s consolidated their power nothing can be done lets move along with their agent Ranil…’ Jokers of the Pohottuwa must be assuming IMF is on the above belief. No main consideration for IMF to consider loan facility is country’s political stability. in other words to apply IMF conditions in a country there should be a government acceptable to the people of the country.

Recently in one of our neighboring country the Prime minister had to go home because he tried to apply for loan from IMF along with their army. He step down but not like Rajapakses whom become very unpopular among the mases, but because IMF refuse to grant finacial assitance for activites he was trying to do with army.
By appointing Ranil as the president Rajapaksas made the IMF programme to stretch further to with out a completion. Grants can get stretch by few more months. If Sri Lankan Parliment appointed a DB Sri Lanka would have come out of this mess.

A frightening report about Sri Lankan women released from India!