Marikkar explains how to get out of a tight spot without raising taxes. 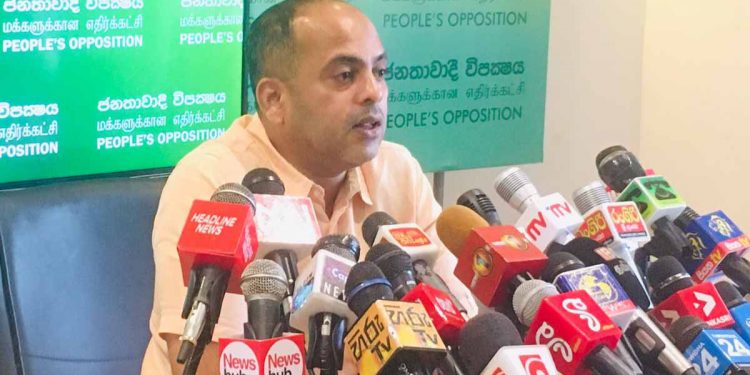 Samagi Jana Balawegaya Member of Parliament S.M. Marikkar said that instead of collecting taxes that put pressure on the people, tax revenues can be generated through new methods.

His comments at a press conference are as follows.

Different people are proposing different solutions to get out of the current economic crisis. Some said , after President Ranil Wickremesinghe is appointed to this position, would win this economic crisis through his international relations, and all the foreign countries are waiting in line to help him. Some people created a social opinion that the crisis can be solved. But there are limited methods to overcome this economic crisis. We need to understand that we are drowning in this economic crisis, we have continuously stated that when Gotabhaya Rajapaksa became the President, he lost the state income through giving tax concessions. On the other hand, his government led by Mahinda Rajapaksa took short-term loans at high interest rates and did various projects that did not generate any income for the government, and then had to pay their installments.

So we have several ways to get out of this.
The first one is to restructure the debt, yes, because we are unable to pay the debt.

The second one is to increase the government revenue in order to get the ability to pay the debt and provide relief to the people. In order to increase government revenue Mr. Wickramasinghe’s policy is imposing an unlimited tax burden on the people and selling things, it is a problem like “Wikkamasingha”. We do not see that a program is being prepared for obtaining new sources of income with a long-term goal. In the world of knowledge, education is a good market. We have not entered that market.

Next is medical tourism. This region is a good market for private hospitals. We don’t seem to make a good effort to join it. And wildlife tourism. There are many things like this to find new sources of income. Although neighboring India has lost its oil resources, India earns more than one hundred and thirty billion dollars a year through information technology. The question is whether we have entered such information technology market. Obviously, short-term, medium-term and long-term solutions should come to this.

We can see that Mr. Wickramasinghe’s solution is short-term, unsustainable, and burdening the people. That is why the tax percentage that has been introduced to the payee tax from the first of October, cannot be borne by the private and public sector employees. The reason is that compared to 2019, the price of goods has increased by two or three times. Income has not increased. That’s where the income-expenditure gap has shrunk. Think reasonably and see if you can pay these taxes.

Now a person who earns 150,000 rupees did not pay taxes until September. According to the new tax, it has been put at three hundred and fifty thousand.
Next, there was no tax for someone who earn two and a half lakhs. He has been taxed twenty one thousand rupees. A person who get three lakh rupees has paid 3000 rupees so far. Now his tax has been increased tenfold to Rs. 35000/-. A person who pays six thousand rupees has increased by about 52,000 and has increased by about seven times. Can you pay this ? A person who paid 9000/- pays a tax of seventy thousand.

Taxes would be paid by audited companies that is entirely the corporate sector. But those below that, ordinary businessmen would stop paying these taxes. A huge tax evasion, current tax payers are automatically transformed as tax defaulters. On the other hand, this government has come to a situation where they can’t do anything and squeeze the payee tax group as soon as the salary is revived.

The middle class people cannot pay this, this is the way to screw Mr. Wickramasinghe.
This is only a gazette, it should be submitted to the parliament. If this is put to the parliament, we will not vote for this tax rate.
We are on a policy and we said that as soon as Gotabaya was reduced, it was reduced unnecessarily. The increase in taxes should be done in a reasonable percentage. This percentage is unsustainable.

Therefore, it will be defeated if it is not reversed. They say to the government, if possible, about the people who do not understand the suffering of the inhuman people living in Pohottuwa

We would like to say that someone who has no clue should try to pass you all together. If we pass this together with the thrada yo of Pohottuwe, we will be taking to the streets with the middle class to save their livelihood for the future of their children.

People thought Ranil Wickremesinghe would be the next President. The United National Party will revive. SJB would be screwed. The minister has postponed the local elections for a year. After September 30, the Election Commission has been authorized to hold this local government election. It should be conducted before March 25th. According to the Election Commission, this year’s voter list will be completed on October 31st. They say that the election will be called so that those who are newly included in the voter register this year can vote.

Accordingly, we see that it will be called in the middle of November. The election should be called and held around the end of January. The party of Mr. Ranil Wickramasinghe, who has just become president, cannot find eight thousand candidates to contest. In order to ask for 4000 votes, 4000 must be put in the list. There are only two thousand MPs and there are about fifteen hundred of them with us. Because he can’t always find them, he now says as if he woke up from his sleep that he will reduce this to 8,000 or 4,000 before the next election.

In 2015, the election was postponed for 3 years and in 2018 they learnt a lesson, by demanding it. There is less provision for it in the new constitution. We hear that Mr. Mahinda Deshapriya is making up a story that he should be brought back to the Election Commission. It is a popular topic because everyone likes him to come to the Election Commission. For that to happen, the speaker should sign the twenty-second constitution and appoint a council and then appoint an election commission through that council. It is roughly a four to five month process.

Some say that large money is spent on an election. Can’t afford it at this time. If the money goes to an election, there are methods of giving assistance from international organizations to hold elections in times of crisis. This president has no opinion, and Parliament has no opinion. All these things need a referendum to restructure and they are asking for a dumb mandate.

If we don’t hold an election and express public opinion, these issues will keep on coming up. International support will be received only if an expenditure is made and public opinion is shown. I would like to tell Mr. Ranil Wickramasinghe that if there are no candidates, don’t contest elections. When sent home in 2020, he stayed home. Do not get ready to take away the democratic rights of the people.