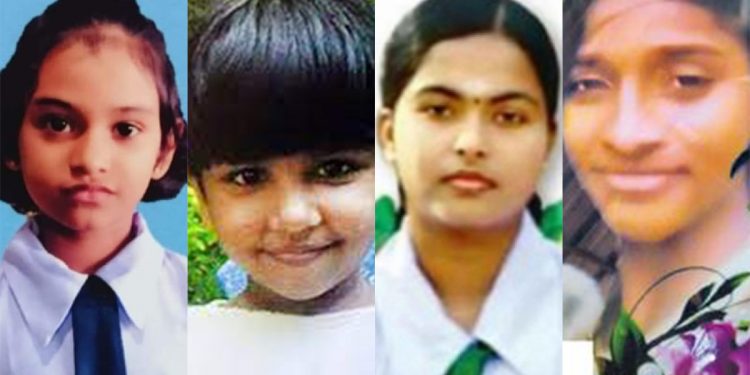 Why did this happen to these children?

If the purpose of Children’s Day is to create a safe environment for children to grow up, can we forget about them and move on? What lessons can be learned from past events? You have to think again and again.

There is hardly a Sri Lankan who does not get heartbroken just by hearing the names of Seya Sadevmi girl from Kotadeniya, Vidya from Jaffna, Fatima Aisha from Atalugama and Buddhima from Dambulla. These incidents of child abuse and murder in recent history have not only shocked the hearts of all Sri Lankans, but pushed them to agitate the law enforcing bodies to a point for them to come forward and take productive measures to prevent this hieniuose human right violation on children.

What happens after these events? What should we do to avoid these? In the background of World Children’s Day which was celebrated on October 1st, it was thought appropriate to inquire about this.
It is a fact that children aged 10 and under 20 are the most abused. The reason for these flowers to subject to this type of incidents is mainly due to lack of attention towards children, economic difficulties and people’s weird mental distortions.

I got scared, I covered her mouth and pushed her into the mud. Aisha cried and cried, “Uncle…uncle…leave me alone…”
This is how the killer of Atalugama Fatima girl confessed. We heard about the killing of the girl Fatima Aisha in Bandaragama. She is a 9-year-old little budding flower like girl. She was not in a age to know what is good and bad. Fatima studied in 4th grade at Al Ghazzali College, Atalugama.

On March 27, 2022, at around 10 am, her fate changed at the hands of a criminal. Little Fatima took 250 rupees with her mother’s advice and went to the shop to buy chicken. She left the shop after buying chicken but did not reached home. The shop was located 500 meters away from her house. CCTV camara behind the shop had the record her comming , buying meat and leaving again. But what happened after that? The police and the villagers had to search for the girl in the swamp near the house.

But the girl could not be found until the evening of the 28th, the dead body of the girl was found in the swamp located 300 meters away from the place of disappearance.

The killer was a person who lived near Fatima’s house. The murder was carried out by a 29-year-old man named Mohammad Farooq Mohammad alias Kottu Bass, a resident of Atalugama Muslim Colony. He used to work in a dairy farm and work as a laborer. He is a father of three daughters. His wife was a pregnant woman . He had made a confession about the incident before the police.

Last March 27, when the girl went to buy chicken, I also came there. I was using ice drugs at the time. I was guarding the girl near the forest until she return with the meat. When the girl came, I dragged the girl and took her to the forest through the cork trees. I touched her body. The girl tried to escape from me by wailing, “Please leave me alone, please leave me alone”. I put a piece of cloth in her mouth and dragged her again for few meters.

I tore my sarong and tied her legs and hands. Then she lost her consciousness. It was only after that that she was pushed into a nearby swamp. Even after that, she kept pressing my knee with her back until she was drowned in the mud….’
This person had said that some days the girl Fatima come to play with his children and that she was also a close friend of his daughters. At that time, he had developed a desire for the girl.

Why did this happen to the little Fatima?

Is it possible for a human being to kill Fatima, who was an immature innocent child of 09 years, how can some one put her in a mud swamp and kill her until she was covered in mud from her nose to her mouth? It should not be justified that something like this happened because of the use of drugs. Because if such people are not properly punished, similar crimes may happen again and again in the future.

On the morning of Saturday, September 12, 2012, the five-year-old Seya Sadevmi girl of Akkaragaha village in Kotadeniya went missing while sleeping at her home. She was taken from the window of the room. This little girl was taken by removing even the clothes she was wearing. The next day, the girl’s body was found in a deserted field about 200 meters away.

On the night of her disappearance, Seya fell asleep while watching TV, so her own mother put her on the bed. Seya’s body was found in a well after the killer raped her the night before and hid her by the canal.
Leaving the parents to think more about the safety of their children, the Seya girl was sexually assaulted and killed by a 22-year-old Dinesh alias ‘Kondaya’. He lived in Seya’s neighboring house.

Sivayoganathan Vidya is an 18-year-old girl from Jaffna. She was studying advanced level from Punkuduthiv Maha Vidyalaya, Jaffna. This girl was brutally raped and killed on May 13, 2015 at around 7.30 am. This was no ordinary murder. It was a planned gang rape that lasted for days. Even lawyers had said that this murder was an internationally planned murder. The murder of the girl shocked not only Jaffna but the whole country.

As she was late coming home after school, her brother had to go to school in search of Vidya. Friends said that even though their mother and brother went in search of vidya to schools her friends informed she did not come to school. vidya was searched for that day but could not be found. The next morning, the villagers had to comb the entire village in search of Vidya. But finally her dead body was found in the forest of the village.
Those sinners had left her school uniform on her naked body.

The underwear she was wearing was also pressed into her mouth. This cruel act was done by a person who was sued by Vidya’s parents over a land case. This girl had to pay with her life as revenge for the anger the criminals had with Vidya’s mother. The girl was brutally raped and killed. A person had undertaken to kidnap and kill Vidya, and four others had joined him and carried out this heinous act.

Dambulla Buddhima Piumali girl lived in Dambulla Halmillyewa Habarattawala area. She was 14 years old. The entire village was shocked by the incident of her being sexually assaulted and killed. Buddhima Piumaali Kandalama. A school girl studying in the 9th grade of D.S Senanayake Vidyalaya. She is the youngest of five children.
There are four girls and one boy in her family. The girl’s father and mother supported the children by working as hired labourers.

Buddhima had gone to Habarattawala area to teach a child of Buddhima’s elder sister’s friend. That friend’s husband came to Buddhima’s house one day to take Buddhima. She had gone to teach those children before as well. But Buddhima girl did not creturn home that day. Se had not come home the next day either. After that, the people of the village and the Dambulla police combed the village together to search for Buddhima. Buddhima was finally found when she was murdered at her sister’s friend’s house.

It is like a naked body with no life. Investigations confirmed that she was sexually assaulted and killed. By then, the sister’s friend and the friend’s husband had fled the village.

It is possible that your beloved child will face such a tragedy tomorrow as it happened to these children by becoming the victims of cruel people. In the distant past, a woman had the ability to travel safely from one end of our country to another. But today that has changed. If these crimes are not properly punished, the day this monster will find your child may not be far away. Every adult should protect their children like their own eyes. The destiny of a child’s could change within seconds. Every mother and father should act responsibly. Attention to children and love and kindness greatly affect the personality development of children. Let’s learn a lesson of these memories of these children and protect our children who are beautiful budding flowers.