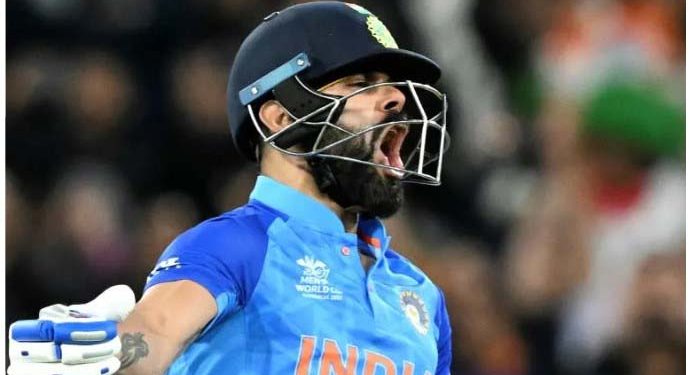 Virat Kohli was lost for words as his unbeaten 82 took India to a stunning last-ball win against Pakistan in the T20 World Cup on Sunday after Sri Lanka had earlier strolled to a nine-wicket victory over Ireland.

India looked down and out at 45-4 halfway through their pursuit of arch-rival Pakistan’s 159-8 with 90,000 spectators working themselves into a frenzy in an incredible atmosphere at the Melbourne Cricket Ground.

But Kohli, with 82 off 53 balls and Hardik Pandya, who scored 40 off 37, launched an incredible fightback with a century stand.

India still needed 60 off the last five overs, which was reduced to an unlikely 28 with only eight balls remaining.

Kohli then bludgeoned two towering sixes off Haris Rauf to leave India needing 16 off the final over from a nervous Mohammad Nawaz, who peppered it with wides and no-balls to help them to their target.

“It’s a surreal atmosphere, I have no words, no idea how that happened,” said Kohli, back to his rampant best after a lean couple of years.

“I am really lost for words. Hardik believed we can do it, if we stayed till the end.”

India captain Rohit Sharma, who was out for just four, was full of praise for Kohli and Pandya’s stand and admitted he had thought at one stage: “We were in no position to win this.”

“Those two guys are experienced. Staying calm and taking the game deep was very critical. Good for our confidence,” he said.

“Our bowlers bowled really well. We had a chance, we tried to stick to our plans. But credit to Virat Kohli.”

Few sporting rivalries match the passion of India-Pakistan and the atmosphere, already electric, hit fever pitch when Pakistan’s openers were dismissed cheaply after being sent into bat, with Azam out lbw for a golden duck to Arshdeep Singh.

There was no let-up in the ear-splitting noise right to the breathless final over which included Kohli hitting a six off a no-ball, then running three byes after being bowled off a free hit.
A wide and some scrambled runs left Kohli at the non-striker’s end with two needed off two balls.

Dinesh Karthik was then stumped down the leg side as he stumbled out of his ground leaving Ravi Ashwin needing two off the final delivery.

India betting legend Sachin Tendulkar wrote on social media: “@imVkohli, it was undoubtedly the best innings of your life. It was a treat to watch you play, the six off the back foot in the 19th over against Rauf over long on was spectacular!”

Earlier in Hobart, disciplined bowling and an unbeaten half-century by Kusal Mendis powered Sri Lanka to a nine-wicket hammering of Ireland in their opening Super 12 match.

Asian champions Sri Lanka restricted Ireland to 128-8 which they strolled past with five overs to spare.

“Really happy the way we played. That is the kind of cricket we want to play,” skipper Dasun Shanaka said.

Mendis, a wicketkeeper-batsman, smashed five fours and three sixes in an unbeaten stand with Charith Asalanka, who made 31, to hand Sri Lanka two points with a good net run-rate.

The island nation have turned around their fortunes after being stunned by Namibia in their first-round opener. They bounced back to advance to the Super 12.

India next face the Netherlands on Thursday in Sydney, while Pakistan will need to bounce back on the same day against Zimbabwe in Perth.

Ireland face the in-form England next in Melbourne on Wednesday, while Sri Lanka will take on Australia, who lost their opening match to New Zealand, in Perth on Tuesday.

A 22-year-old chain thief was fatally shot by police in Negombo.

Harsha gives a severe warning to Ranil! Don’t do it! There could be a major calamity ahead! (VIDEO)