India and Japan vow to boost defence and technology ties amid Chinese threats. 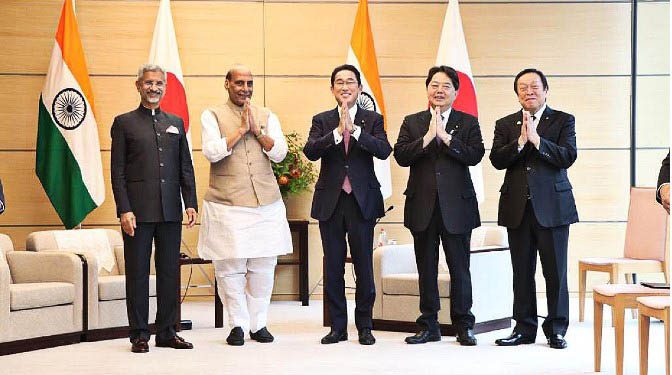 The first meeting was in November 2019. The next was delayed from the anticipated mid-April dates, soon after the March Modi-Kishida summit. The Ukraine crisis required a refocus, but now the bilateral engagement is back on track.

There are clear takeaways from the meeting.

First, the ministers’ commitment to a common strategic goal of achieving a ‘free and open Indo-Pacific’ (FOIP) was emphasized. The FOIP is a euphemism often used to counter China’s increasing military and economic influence in the region.

The FOIP is inclusive and resilient, based on the rule of law, and free from aggression. The four ministers reiterated support for ASEAN’s unity and centrality and for the “ASEAN Outlook on the Indo-Pacific (AOIP),” which upholds the common principles of the FOIP that India and Japan cherish.

Thus, India and Japan are intensifying their collaboration for the FOIP. As the Quad repositioned itself, they emphasized the inclusion of the ASEAN into their FOIP plans since that is the arena for the contention with China in the center.

Japan discussed DPR Korea, the Ukraine crisis, and the situation in Taiwan. All these are important for India, but Indian emphasis was on the Indo-Pacific.

It is a sense of the maturity of the partnership that the joint statement could accommodate what Japan stated and India’s position. India does not seek such public support for its position vis-a-vis China on the border.

The second important aspect is that the meeting effectively followed the Modi-Kishida summit of March 2022, where regional and global security challenges were discussed.

The “Partnership for a Peaceful, Stable and Prosperous Post-COVID World” concerning regional and global security challenges is vital. India has a two-plus-two dialogue mechanism with a few strategic partners — the three other Quad members and Russia.

Thus, despite India’s closeness to Russia and its strategic autonomy on several issues, particularly in the Ukraine crisis, the Indo-Japanese understanding was unequivocal, bilaterally, and regionally.

Thirdly, India acknowledged Japan’s determination to reinforce its defense capabilities and supported enhanced security and cooperation. The meeting noted that while the 2+2 is taking place after three years, there were several official level engagements between India and Japan, particularly over the last two years.

This is a positive trend showing that the political level understanding is permeating the official Japanese bureaucracy for strategic and defense issues like it has for economic issues.

These dialogues which take place or are anticipated will make the strategic partnership more meaningful. There is also growing interaction in multilateral exercises. For instance, Japan, for the first time, participated in Milan and different capacities in the Garuda Shield held by Indonesia and the Pitch Black by Australia.

The ministers expressed their commitment to continuing bilateral and multilateral exercises, including “Dharma Guardian,” JIMEX, and “Malabar.” Air force exercises are on the anvil, as are the Joint Service Staff Talks launch between the Japan Joint Staff and the Indian Integrated Defense Staff.

The ministers also committed to seeking deeper cooperation on HADR and response to pandemics. These expanded bilateral and multilateral regional exercises signify consistent engagement between Indian and Japanese forces.

However, there was the possibility of a hiccup here since India was participating in the Russian Vostok exercises in the Far East between September 1-7. Japan was apprehensive that since some of those maritime exercises would be on the disputed islands between Japan and Russia, India should be sensitive to this.

India only participated in Vostok drills without the marine component, avoiding Japan’s northern regions. Indian diplomacy is now engaging efficiently with Russia, Japan, and other friends.

In April 2022, at the India-US 2+2, India announced it would join the Combined Maritime Forces (CMF) as an Associate Partner for the Bahrain-based multilateral partnership. CMF is a multi-national naval partnership to promote security, stability, and prosperity in the Western IOR.

Indian Navy has a Liaison Officer posted at the US Central Command (CENTCOM) in Bahrain who liaises with three task forces: CTF 150 (maritime security and counter-terrorism), CTF 151 (counter-piracy), and CTF 152 (Arabian Gulf security and cooperation).

As India has been, since 2020, an observer of the Djibouti Code of Conduct, it makes it easier to engage a larger number of navies with common goals. Currently, the Information Fusion Centre has several liaison officers from the UK, the US, Australia, Japan, France, Seychelles, and Mauritius.

Fifth and perhaps the most crucial aspect of these discussions was the commitment to enhance cooperation for defense equipment and technology. This is something India remains very interested in.

If Japan had more independent development of weaponry and related systems, it could be an essential source of supplies for India. There is ongoing cooperation for unmanned ground vehicles and related robotics.

The Sixth India-Japan Joint Working Group on Defense Equipment and Technology Cooperation is working on identifying more defense equipment and technology areas. Somehow, these have been slow in working out.

Electronic warfare, cyber security, robotics, and related elements are perhaps easier to develop as many are dual use and could even look at production in India after initial export to New Delhi. Japanese defense production lacks economies of scale and is hence expensive.

India’s desire to purchase amphibious planes from Japan is not discussed. The Asahi Shimbun revealed that Japanese defense officials are saying that the amphibian planes’ high cost may deter India.

It is possible that Japan also could not transfer technology for ‘Make in India’ aspects which are essential for India. The new equipment also needs to be integrated into Indian defense plans.

India and Japan increase military exchanges. Exercises are bilateral and multilateral. Non-symmetrical involvement allows each to follow its treaty or other alliances.

(The author is the former Ambassador to Germany, Indonesia, Ethiopia, ASEAN and the African Union. He is the Chair, CII Task Force on Trilateral Cooperation in Africa, and a Professor, IIT Indore.)