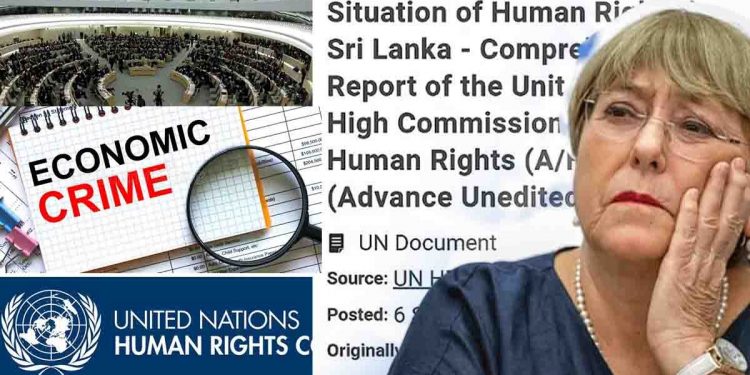 The husband is a thief, and the wife is a thief. When the masculine word is ‘hora’, the feminine word is ‘hera’ in Sinhala. Where did the couple steal together? Although this wonderful story is not from our country, this information was heard from a land close to Sri Lanka. It has only been two weeks since these happenings were heard.

This story was heard from Malaysia in the first week of September 2022. In other words, several strong corruption and fraud charges filed against former Prime Minister Najib Razak, who was a very powerful politician in Malaysia, were recently judged by the Supreme Court of Malaysia. He was released on bail on several occasions even though these charges were brought to trial against him several times before this. But this time the beak of the former prime minister got stuck in the banana tree. The Supreme Court gave a decision that shook not only Malaysia but the whole world. The High Court judge has decided to send former Prime Minister Najib Razak to prison for 12 years. Accordingly, the former prime minister, who is currently 69 years old, was taken to prison from the court. He is now serving prison sentence.

This incident took place only a few days later. The wife of the former Prime Minister of Malaysia, who was sentenced to prison, was accused of corruption and fraud, and the Supreme Court started hearing the cases against her. Rosmah Mansor, who is now in her 70s, is a person who has faced various corruption charges for some time now. The trial against her was held at the end of the first week of September 2022. The High Court judge gave a wonderful decision in that trial as well.

She was found guilty of corruption charges and Rosma Mansoor was sentenced to 10 years in prison. In the end she went to prison like her husband from the court itself. The prime minister is the head of state in Malaysia. Because of this, she was considered as the first woman of the country at that time. Somehow she had to server prison sentence within seven days had passed since her husband went to jail. This unique event has now become a rare recorded event that has shocked the whole world. Such a situation arose due to the theft of state wealth or public wealth.

Thus, the public wealth stolen by the former Prime Minister of Malaysia’s wife is very large. It was a deal of 42 million US dollars and she had received 03 million dollars (110 crores in Sri Lankan currency) twice. It was proven that she got this amount from a contract to install solar power systems for several public schools in Malaysia. Meanwhile, her husband, former Prime Minister Najib Razak, was accused of embezzling $10 million from government contracts. This is about 350 crore rupees in Sri Lankan currency. That charge was also proved in court. Because of this, both the former state leaders were found guilty and went to jail.

The article was written about this special event, when even the heat had not subsided, because of another important story that was heard a few days before this. That is, a strong threat from the international community against the government leaders and other responsible persons involved in corruption scams in Sri Lanka. That is, about a week before this, a special report prepared by the United Nations Human Rights Council on human rights in Sri Lanka was published.

This is a report published in connection with the 51st Human Rights Session which started on September 12, 2022 in Geneva, Switzerland. Consisting of 16 pages and 71 chapters, this report is a specialized publication prepared in English only. This report provides a thorough investigation and analysis of the latest human rights situation in Sri Lanka. Those articles are given in a very long and detailed manner.

Also, this organization presents a long report every year related to the progress of human rights in Sri Lanka. This bit of information is written down for your convenience for some reflection. Anyway, this council has presented a report for the year 2022 that is completely different from the special reports presented for Sri Lanka over the past few years. That is, prior to this, their reports often revealed war crimes or similar human rights violations. But this time, although such crimes were mentioned in the new report, a very different type of crime was also mentioned. What is this story? That is, this was mentioned in a wonderful word. ‘Economic Crimes’ was the controversial word. This word was mentioned in many places in the 2022 report, emphasizing the other point associated with it. Let’s take a look at these specific articles.

Among the various types of crimes in the world, what are the so-called economic crimes? Although this word is a kind of new word for Sri Lanka, it can be considered as a well-known word internationally. According to international definitions, economic crimes are also known as financial crimes. Financial crime is what we are talking about. Also, many different activities can be seen in Sri Lanka. Somehow, although both these words have been expressed as the same interpretation, the scholars are of the opinion that the meaning expressed by economic crimes is much deeper. In other words, it is a crime committed against the entire economy of a country.

The expert opinion is that the crime is mainly committed through a financial crime. This means an illegal act done by a person or a group of people to gain financial or professional advantage. Here, the main purpose of such crimes is to get economic benefits for themselves. These crimes are carried out domestically or internationally within a country. In other words, these economic crimes operate at a highly organized level. Here this process is implemented in a criminal manner and it affects the economy of a country very severely.

These economic crimes are divided into 08 areas according to international financial interpretation. This is indeed a very complex subject and for Sri Lanka sometimes this shows a new story. However, this destruction can be seen as a financial crime in Sri Lanka. Anyway, what are these categories of economic crimes against Sri Lanka today?

According to accepted international interpretations, those areas can be outlined as follows.

Now you will understand the seriousness of this subject. People involved in these economic crimes or financial crimes are known as ‘economic criminals’ or ‘financial criminals’. These individuals or groups of individuals or these crimes are carried out in a very sophisticated manner through central banks, banks and other financial institutions related to the respective countries. There, these people carry out severe financial laundering through large-scale frauds, where the economies of the respective countries suffer a collapse. The other most dangerous destruction is the great suffering that the people of those countries have to suffer due to the collapse of those economies.

Now you have come to the proper turning point in this story. Economic crimes are also very clear to you. Then the latest report of 2022 presented by the United Nations Human Rights Council did not mention such crimes? This report was presented by the UN Human Rights Commissioner, Michelle Bachelet, who chairs the Council. Here, for the first time, the report has strongly emphasized on the economic crimes that are happening and happened in Sri Lanka. It says like this.

The reason for the collapse of Sri Lanka’s economy in recent times is the occurrence of many economic crimes. Due to these economic crimes, the people of Sri Lanka were put in a very tragic situation, and their human rights were violated accordingly. In this way, economic crimes and the criminals behind them should be looked into. Due diligence should be applied to investigate such corruption cases. We are also asking the member states of the Council to assist in these investigations.

It is requested to provide that technical support to protect the civil society of Sri Lanka. We also hope for the support of all parties to investigate the economic crimes committed at the international level and those criminals. Such people should be brought to justice immediately and steps should be taken to recover and confiscate the public wealth stolen by them. Also, measures should be taken to impose movement restrictions as well as other relevant laws against such persons….’

In this way, the UN Human Rights Commissioner Michel Bachelet’s report has stated. It has been strongly emphasized here that the law should be implemented locally and internationally against the criminals who violated the human rights of the people by committing economic crimes. In this report, it has been emphasized that there are many people in Sri Lanka who are responsible for causing economic crimes in Sri Lanka.

The names of several such persons were mentioned in some media in Sri Lanka, but such names were not mentioned in the report consisting of 16 pages and 71 chapters. But in a human rights report submitted to Sri Lanka earlier, several such names were mentioned. However, this is the first time that Sri Lanka has been charged with this type of human rights crime. It is also the first time that such a thing is mentioned in an official report. Therefore, this is an eye-opening controversial story in Sri Lanka.