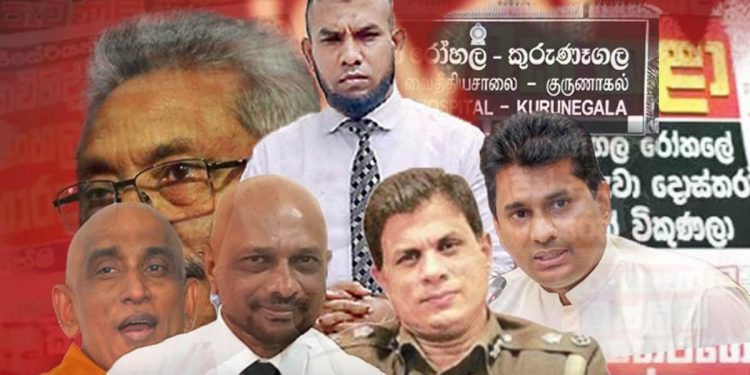 A critical discovery has been revealed by a journalist that the fictional and fraudulent female sterilisation was aimed at Dr Shafi of Kurunegala hospital in order to generate momentum to bring Gotabhaya Rajapakse to power.

Mr. Tharindu Jayawardena, a member of the Youth Journalists Association of Sri Lanka, revealed information of the conspiracy during an interview with an online station.

He also stated how many persons from various institutions, such as the police, the judiciary, and hospitals, were involved in the plot.

It also turns out that MP Athuraliye Ratana Thera and a few other people have had a direct influence on the investigators.

A national newspaper article titled “A doctor of Thawheed Jamath forcefully sterilised over 4,000 Sinhalese mothers” sparked outrage among the country’s Sinhala and other communities. This resulted in extremely unpleasant, cruel, and ugly occurrences in civil life. Dr. Shafi, who worked as an obstetrician at the Kurunegala Teaching Hospital, was arrested by police and lost his job.

However, later investigations revealed that all of Dr. Shafi’s charges were fraudulent and had no reality. He was then reinstated in his work, and all of the salaries and other payments he had lost were returned to him.

Dr. Shafi is now back at work. 4000 (forced sterilised) mothers have given birth. The national publication that reported the accusation with evidence cannot find it.
Following the horrific Easter massacre, several mainstream media outlets took an anti-Muslim posture and aired communally targeted news, triggering violence and killings against the Muslim community that were never accurately reported in the mainstream media.
Following the erroneous reporting, a chief prelate went so far as to propose that this doctor should be stoned to death. False large media headlines targeting the doctor in question fooled the chief prelate

Journalist Tharidu recalls one occurrence after another that led to Dr. Shafi’s imprisonment. He claims that one lady who complained about the doctor after the birth of her first kid said she had not conceived, but the weird thing is that her husband has been away for the past three years, and she protested out of sheer dread.

Tharindu eloquently describes these experiences. The video is attached below.