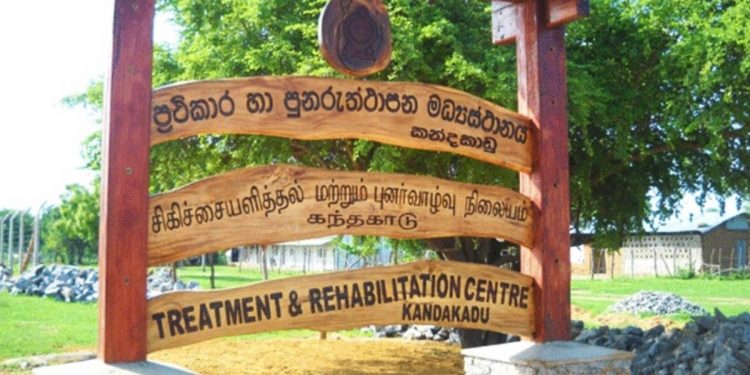 After the conflict between two groups of inmates at the Welikanda Kandakadu Rehabilitation Center last night (6), it is reported that the inmates took control of the center for more than 18 hours from around 10:00 that night until around 4:00 this afternoon.

These inmates, who behaved riotously, had also broken into the armory of the rehabilitation center, and due to the intervention of the army in the incident, the weapons had been avoided.

Due to the inability to control the situation by 4.00 pm yesterday, on the instructions of the Polonnaruwa Senior Superintendent of Police Mr. Indikada Silva, officers from several police stations including Manampitiya, Welikanda, Pulastipura, Aralagangwila, Higurakgoda, Lankapura were called there and a large number of officers from the Army as well as the Special Task Force. were present to control the situation.

Later, the members of the security forces entered the rehabilitation center with great effort and took control of it from the inmates.

A little while ago, 256 prisoners who were fighting in the camp have surrendered to the army.

The Welikanda Police said that they will take these people in 05 buses and present them before the Polonnaruwa Magistrate Court.

So far, 35 escaped inmates have surrendered and 12 people have been arrested from various police stations in the island. Another group is still missing.

When the incident happened yesterday, about 456 inmates were detained in the detention camp and sent to the rehabilitation work.

The police and the army say that when two groups who were recently brought to the rehabilitation center from Galle and Colombo went swimming, an argument over a bucket escalated into a fight which escalated later.

When the conflict between two rehabilitation beneficiaries was going on, one of the parties who joined the conflict attacked a group of soldiers who went to settle it and damaged the uniforms of the soldiers.

Rehabilitation Commissioner General Major General Darshana Hettiarachchi states that the inmates undergoing rehabilitation caused severe damage to government properties including four vehicles in the camp due to the conflict.

Major General Hettiarachchi also said that four inmates and an army soldier who were in the Kandakadu Rehabilitation Center were injured and admitted to the Polonnaruwa General Hospital due to this clash.

Major General said that a bus belonging to the Rehabilitation Department and four other vehicles were severely damaged due to the attack by the inmates, and they damaged televisions, refrigerators, beds and many items used by the inmates and the army, and the value of those items has not been assessed yet. Darshan Hettiarachi said.

After the clash between two groups of inmates in the rehabilitation camp, one group has been admitted to the Senapura Rehabilitation Center and another group of nearly 256 people are staying in the center’s buildings, the Major General said.

These 256 people surrendered to the army a little while ago.

These inmates are referred to the Kandakadu Rehabilitation Center for a one-year rehabilitation period due to drug addiction.

Army, Special Task Force, Sri Lanka Police were called to the place to control the chaotic situation in the rehabilitation center, but they were not allowed to enter the camps. Therefore, it was difficult to control the situation.

Journalists who went to report this event were also obstructed by an army officer present there and stopped reporting the incident at the Army Rehabilitation Center due to this situation.

As the situation could not be controlled even by three in the evening, on the advice of Polonnaruwa Senior Superintendent of Police Indika De Silva, police officers from several police stations including Manampitiya, Welikanda, Pulastipura, Aralaganwila, Higurakgoda, Lankapura were called to the scene.

A large number of Army and Special Task Force officers were present to control the situation.

The Commissioner General of Rehabilitation, Major General Darshan Hettiarachi, who came to investigate the incident, said this while speaking to the media.

In all, five people were injured in that incident. They were admitted to Polonnaruwa General Hospital. In addition, one crew member was injured. He is also being treated at Polonnaruwa Hospital.

The property of the rehabilitation camp has been damaged due to this conflict. We have currently taken twelve people who fled the conflict into custody. Another group has been hiding in the camps because they thought they would be beaten.

A group involved in the conflict has been sent to the Senapura rehabilitation camp. Others remain in the rehab center in disarray.

However, by now, the perpetrators have surrendered to the army. Special operations have been started to find the escaped prisoners.

President Ranil Wickramasinghe has ordered the Minister of Justice to provide a full report on the matter.

We do not confess guilt! Dhanushka is not guilty! (VIDEO)

Dhanushka and others behaved strangely in Australia! Sydney casino brawl involving Chamika! Some went back to their rooms past mid night!