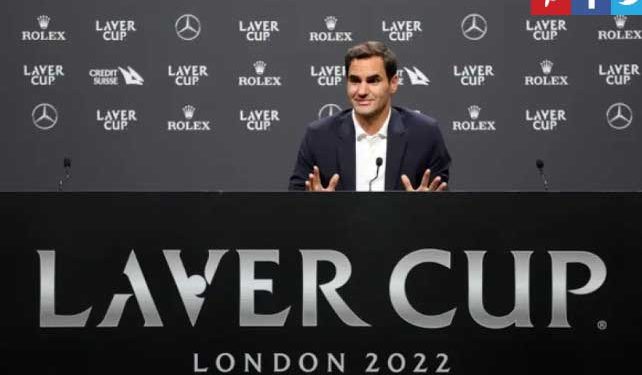 The 20-time Major winner Roger Federer will retire tonight at the Laver Cup. The Swiss Maestro will play the doubles match alongside his great rival Rafael Nadal and end his career after 25 incredible years on the Tour. In his pre-tournament press conference, Federer discussed various topics and mentioned world no.

1, Carlos Alcaraz. Roger praised the Spanish teenager and everything he has achieved at the US Open and throughout the season. Also, Federer said he is happy for Carlos’ coach Juan Carlos Ferrero, calling him ‘his guy’ after sharing his early years on the Tour with him.

Alcaraz has been a player to beat in 2022, winning five titles and becoming the first teenager on the ATP throne. The Spaniard claimed his second ATP title in Rio de Janeiro in February and lost a tight battle against Rafael Nadal in the Indian Wells semi-final.

Carlos bounced back in Miami and lifted the trophy as the third-youngest Masters 1000 winner. Alcaraz prevailed over Alex de Minaur in Barcelona and toppled Pablo Carreno Busta in the title clash to add the second ATP 500 crown to his tally and find himself in the elite top-10 company at 18!

The Spaniard became the ATP Race leader contender with those points and added more with the quarter-final run at Roland Garros.

Alcaraz lost two ATP finals in Hamburg and Umag on clay within two weeks and traveled to New York as one of the favorites. Carlos had a chance to become the youngest world no. 1 in ATP history with a deep US Open run. Rafael Nadal and Daniil Medvedev fell in the fourth round and left the door open for Alcaraz and Casper Ruud, who battled for a Major title and the ATP throne.

1 honor, with a healthy advantage over the rest of the field. “I watched Carlos closely, what he did at the US Open and throughout the year. It’s been fantastic. I have said there will always be new superstars in the game, and he is one of them.

The game is bright with all of them around. Carlos and I practiced at Wimbledon a couple of years ago, and I thought he played well. His coach Juan Carlos Ferrero was there, and I was more excited to see him because he is a guy from my generation.

I ended up practicing with Juan Carlos, and it was great. He did not miss a ball and could still be on the Tour. I’m happy for him and Carlos; they have been very successful,” Roger Federer said.

Spanish tourist raped by 10 in Jaffna