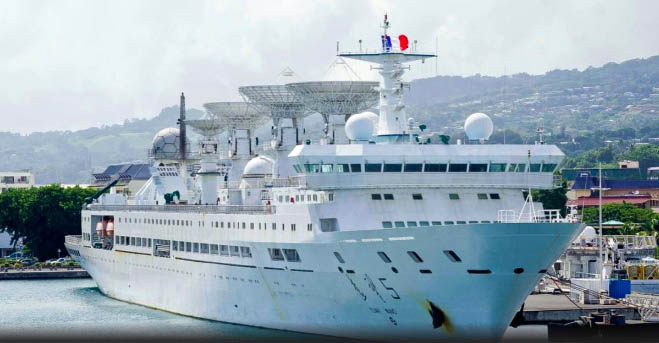 ⦁ Reason for sudden Chinese ship to sail to H’tota unknown?
⦁ Is this a step closer of China’s dominance in ‘SEA’ region.?
⦁ What would be India’s and USA reaction ?

About four decades (40 years) ago, during our school days I remember very well seeing many such wonderful people in the Maradana area of Colombo . The ‘hair tied Chinese’ is this wonderful human race.

These people could almost always be seen plying their trade in a number of shops near Maradana junction. At that time, the Chinese people who migrated from China to Sri Lanka were like this and even today some of their shops can be seen in Maradana.. Some of their people had shops in Colombo Pitakotuwa too.

At that time, they used to say ‘Chinese with tied hair’ as a metaphor for people who do not know any thing. But today it is impossible to find a Chinese with tied hair. Also, it is surprising to find such Chinese not only in Sri Lanka but also in China. In today’s world, the Chinese are a type of human with well-cut hair.

Today, a Chinese man with long hair can only be found in the ‘Shaolin Temple’, a traditional martial art training monastery in China. Even an old woman in China, has her hair cut very short these days.

Although it is the case in China today, it is not the case in Sri Lanka. Today, there are many types of young people who have grown hair and beards in our country. A wave of such wonderful young people gathered to the final struggle. There are many stories about these young men, some blame others praise. Anyway, the wave they brought has gone down in history.

All the Rajapaksas have now gone home from their struggle, but only physically. The political puppets of the Rajapaksas are still scattered everywhere. We are not going to continue talking about them here. Anyway, this story started to be written by a bunch of Chinese people who tied their hair in our country because of a new Chinese story that is being heard these days.

It really is a wonderful example of Chinese people with their hair cut short in our modern world. What is this amazing controversial story?

A few days before , a news of a strange type of Chinese ship sailing towards Sri Lanka was seen in several news media. It was revealed that this Chinese ship belongs to the Chinese Navy and it is a completely different type of ship.

Photos of this wonderful huge ship were also published. When you see them, it is immediately apparent that the whole area of the upper deck of the ship is filled with a variety of large satellite technical equipment. This ship, which has been equipped with many modern technical equipment without ,created great surprise and curiosity at the moment of seeing it. That is why we have to find out what is said about this wonderful ship and Sri Lanka.

The word Yuan Wang-5 comes up in this story. The official name of the wonderful ship above mentioned as such, and this is a special ship that conducts space and satellite research belonging to the Navy of the Chinese government. It is also known as a space and satellite tracking ship.

The “Yuan Wang-5” ship, which amazes our eyes as soon as we see it, is currently sailing towards Sri Lanka and it is scheduled to dock at Hambantota port on August 11. From then it will be anchored in that port till August 17. There has been a lot of controversy in a number of local and foreign parties is almost a week.

Although the Ministry of Defense of Sri Lanka initially denied the news that such a Chinese vessel would arrive in Sri Lanka, it has now been announced that its arrival will take place.

Colonel Naleen Herath, spokesperson of the Ministry of Defense of Sri Lanka has stated that this ship is coming here to get fuel and other service facilities. He has also stated that this is a normal naval procedure.

Although the Sri Lankan security forces have made such statements, there has been a huge controversy in India about the arrival of this amazing ship. That is, this fire has started in the Indian state leaders and the Indian security forces. Anyway, India has also expressed its opposition to such an event.

Meanwhile, it is said that the United States is also paying close attention to this naval arrival. At the same time, several other Asian countries have also paid special attention to this event. There is also an ideology that China is India’s main enemy. Also, China is known as an adversary of America. Under such an environment, Sri Lanka has to face great pressure as it has caught up in a tug or war.

Anyway, Chinese research vessel started sailing from Jiangyin port in China on July 13th, and it is expected to arrive in Sri Lanka on August 11th. Now the administration of Hambantota port is under the Chinese government.

Now let’s find out what is the details of this amazing Chinese ship Yuan Wang. The Chinese word Yuan Wang means ‘Long View’. These ships come in several types and models and all belong to the Chinese Navy. In China, the navy is not known as the navies of many other countries That is, it is called the People’s Liberation Army Navy in English.

There are currently 350,000 (three and a half lakh) permanent military personnel in the People’s Liberation Army Navy, which is under the full direction and supervision of the Communist Party of China. There are also 530 different types of naval vessels and about 600 different types of aircraft.

Also, there are many other types of modern weapons. But now another special fact is revealed here. That is, the above special Yuan Wang ships belong to another special military division under this army. This is a really amazing article.

This special military unit is called the People’s Liberation Army Strategic Support Force. This can be interpreted as the People’s Liberation Army Strategic Support Force in Sinhala. This military force is engaged in a more specialized mission than other Chinese military forces. In other words, all the modern activities related to space, satellite, cyber space as well as digital and electronic warfare technology are carried out through this force.

Under this kind of environment, it is clearly seen that this military method carried out by China is a very complex one. The Yuan Wang-5 ship that will arrive in Sri Lanka the day after tomorrow also belongs to this force. Although some parties have introduced this vessel as a general research vessel, it is completely wrong. This is a 100% naval warship.

As it can sail in any sea region of the world, it is capable of exploring many military secrets of the countries located in those regions. Satellite surveillance and intercontinental ballistic missile detection and tracking can be done through this vessel’s advanced technology. However, it is not mentioned that there are any modern military weapons in this ship.

However, the Chinese security forces have kept many secrets about the other modern devices and facilities inside the ship. Some parties have speculated that the ship may have many modern weapons. Somehow, this ship has the ability to discover even India’s nuclear war secrets.

The Yuan Wang 05 yacht that is going to come to Sri Lanka was manufactured in 2007. But the technology inside these vessels also happens to be modernized from time to time. The ship has all the facilities to transport 470 military personnel and can carry 21,000 tons of cargo.

This vessel is 220 meters in length. It can travel at a speed of 20 nautical miles (37 km/h) and is diesel powered. This vessel and all the modern equipment it contains are manufactured in China. Also, all the people working in this naval vessel are Chinese military personnel.

In many cases, the President of China can also be seen wearing Chinese military uniforms and boarding such warships to supervise the activities.

The three most powerful navies in the world are the American Navy, the Chinese Navy and the Russian Navy respectively. Looking at it this way, India is at the 7th place in the list. Thus, the arrival of the above-mentioned Yuan Wang ship to Sri Lanka and its stay here for a week is likely to be a process of spying the Indian military?

Will Sri Lanka allow the Chinese spy ship there? The technical equipment of this Chinese ship can search a lot of information in an area of ​​750 km. Will India’s war secrets be exposed?

Road to no where: China’s Belt and Road initiative at tipping point