Today, the President, who assumed power from the ousted Rajapaksa, made a despicable tribal speech in Parliament! Ranil receives a reply in the form of a major attack from Sajith. (VIDEO) 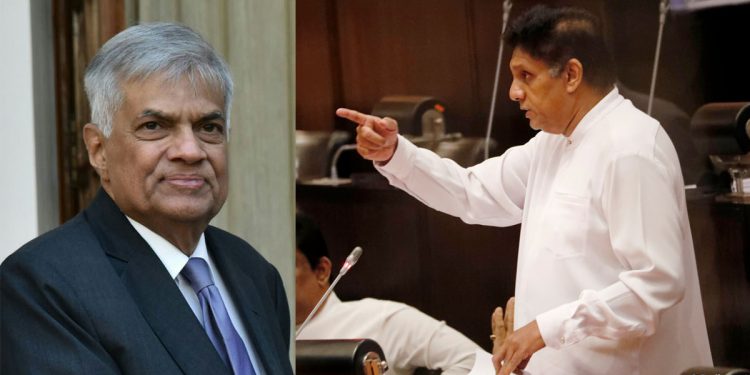 Mr. Sajith Premadasa, the leader of the opposition, says that he condemns the President’s statement of red carpeting economic killers and threatening the people.

He has stated this in a statement made today.

The full statement is as follows.

Targeting the citizens of this country, the President made an extremely cowardly and tribal-style statement today, and I reject that statement with deep contempt.

◼️It can be considered as an arbitrary statement made by the president who gained power by using the key secured from the hands of the Rajapaksa who retreated in front of the people’s struggle in a very humiliating manner.

◼️ The struggle of the citizens of this country, regardless of party color, against the arbitrary regime that was pushing our motherland into a dark abyss by the government led by the Rajapaksa ended in a decisive defeat of a misguided government.

The result was that the powerful government led by the President and Prime Minister changed and a new President led government was formed. However, it was a change that the Rajapakses wished for after their retreat and the current President is fulfilling that wish.

◼️That is the gatekeeping mission of a perverted government created without the consent of the citizens of this country and he is performing that task.

◼️If the President thinks that the citizens of this country are afraid of the cowardly statements made by a bunch of economic killers who came to power without any consent of the people, he should remember to re-examine the political upheaval that happened a few months ago.

◼️Let us ensure that a fascist-style program that does not believe in the will of the people or in the sovereignty of the people will not be allowed in this democratic country, and that any action taken by the government or the president will be unconditionally reversed.

◼️ In an economically devastated country, the current president has become a racket of economic killers who destroyed the economy by suppressing the citizens who could not bear the burden when they rose up against it, but let us emphasize that the citizens of this country are not such puppets.

◼️The President, who welcomes the economic murderers with high regards and welcomes them on the red carpet, is going to give the people who are suffering immense sufferings, his frantic statement and behavior implies that we will not limit such threats or threats.

◼️These kind of cowardly statements can be expected from a leader of a deviant government and all the dear people of the country are requested not to limit such crazy and funny statements and behavior.

◼️Let us emphasize that the citizens of our country struggled in an extremely disciplined manner and full of expectations, full of altruism instead of selfishness, marking a new chapter in the history of Sri Lanka as well as in the history of the world, and that the united people force will become the shield that protects the people in the face of any threat against such citizens.

Join us to solve the ethnic problem after the budget