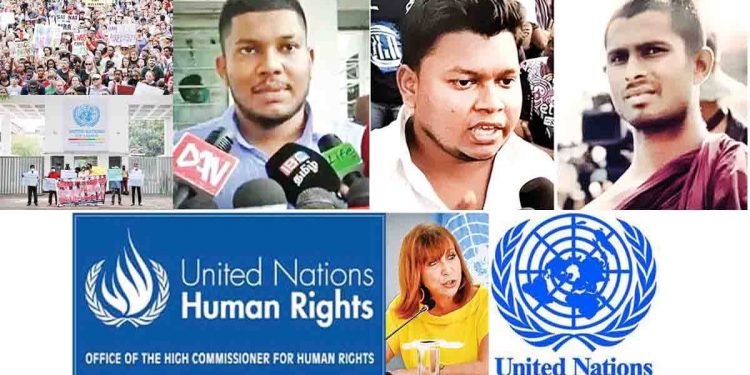 I am Anura Mudali. Wasantha Mudalige’s brother. We came to the UN office today to participate in a special discussion. Basically, we sent a letter to the Sri Lanka office of the United Nations two weeks ago regarding the detention of Wasantha Mudali and Galwewa in Siridhamma Thero prisons. According to that letter, we were asked to come to this office today for a discussion. A notice was received.

That special discussion is going on now. There we discussed about the violation of fundamental rights and the issues that are happening inside the prison during the detention of Wasantha Mudali and Galwewa Siridhamma Thero. The issues that have arisen about the violation of their fundamental rights and their health condition. Talked at length with the authorities during the discussion.

The security and health issues of these people were the first to be discussed. The situation was discussed at length. We pointed out several incidents there. Although Wasantha Mudali was taken to the hospital for treatment and given medicines, these medicines did not cure the disease. Because of that, had to resort to treatment several more times. Also, Galvewa Siridhamma Thero has been sick for 3 days and has not taken even a Panadol tablet. However, due to the intervention of the family and the intervention of the society, he was hospitalized. While receiving treatment at the hospital, after 03 days, Galvewa Siridhamma Thero was again brought to the Terrorist Investigation Unit and put in the same cell. We would like to ask whether this government is so inhumane as to send a dengue patient to a cell with only a piece of mat without a bed before he recovers completely…”

‘The issues we discussed with her today are clearly the violation of human rights of these two prisoners and their health problems and the condition of providing related treatment. When detaining these two, we pointed out to those authorities that there are no proper environmental conditions in the cells in the Terror Investigation Unit. There is no sunlight in those cells. No ventilation. A prisoner should be treated with humanity. We wrote to this UN office because such treatment does not happen to these two at all. We requested those authorities to intervene in the situation of such prisoners. We made that request today through this special discussion. We have received a good response about it…’ What is the familiar and controversial story? We heard these stories a few days before this, in front of a special building at a turning point from Colombo’s Thunmulla Junction to Bauddaloka Mawatha.

That place is the United Nations Office in Sri Lanka. This statement was made by a special person who was surrounded by many journalists in front of the main entrance of this unique place, which is known as the representative office of Sri Lanka, which is represented by the United Nations. His name is Anura Mudalige. Wasantha Mudalige, the convenor of the Inter-University Student Union, who is currently in the custody of the government’s security forces after being accused of anti-government activities, is the elder brother of the above Anura Mudalige. Both these brothers are university students and Anura Mudalige is a Criminology graduate from Jayawardenepura University.

He made such an exciting statement a few days after this, after a special discussion with the United Nations office in Sri Lanka. That is, the party had submitted a letter of request to the United Nations Office regarding his brother Wasantha Mudalige and Reverend Galvewa Siridhamma Thero being detained under the Prevention of Terrorism Act.

It had emphasized at length in the letter about the violation of the human rights of the above two detainees. Therefore, in order to find a solution to the situation, the United Nations Office was requested to intervene. Accordingly, the United Nations authorities held a special discussion with the victim on that day. From the currently revealed facts, it has been shown that this type of discussion has never been given to any student party by the United Nations office in Sri Lanka. That is, the university students of Sri Lanka have not been given such an opportunity. On many occasions in the past, some parties and groups held various protests in front of that office and some of those parties handed over various letters and memos to the UN authorities.

There, too, the documents are often accepted by an office representative near the main office entrance. Then no party will be allowed to enter the building. Also, according to the current reports, such parties have not been brought to the UN office and held discussions.
However, arrangements have been made to hold only some discussions at a political or diplomatic level in the premises. Thus, Anura Mudalige, the younger brother of Wasantha Mudalige, and others have got a very special opportunity in such an environment. This party has recently submitted the letter of grevences with its demands to Mrs. Hanaa Singer-Hamdy, Sri Lanka’s representative to the United Nations, who is currently the head of the United Nations office in Sri Lanka.

Accordingly, on her recommendation and approval, the discussion has been given to the above party. It is reported that the discussion was held under her leadership. Mrs. Hana Singer Hamdi was appointed as the Head of the United Nations Office and Official Representative in Sri Lanka on 05th May 2021 and she continue to hold that position. Hana Singer Hamdi is an accomplished administrator who has held various diplomatic posts for over 30 years. She is appointed as the head of the Sri Lanka office of the United Nations by the Secretary General of the United Nations, Antonio Guterres.

She is the head of the United Nations Sri Lanka office as well as the head of the United Nations Development Program (UNDP) in Sri Lanka and the representative of Sri Lanka. Prior to this position, she also held the position of Regional Director of UNICEF. She is an Egyptian woman and a graduate of Cairo University, Egypt. She also holds a Master’s degree in Political Sociology from there. A scholarly diplomat of this type, she is often known for her advocacy, influencing skills, and fearless decision making.

Thus, she has led the discussion with the main party of Anura Mudali .

However, not much has been revealed about the long details or the aftermath of this discussion. Several times before this, Mrs. Hana Singer Hamdi, the United Nations representative in Sri Lanka, made several very consistent and strong statements about the violation of human rights in Sri Lanka. That is, from the moment the people’s struggle started in Sri Lanka in the past, she took the side of the strugglers and raised her voice against the violation of human rights. She also worked to take that voice to the international level. Last August 22, under the Prevention of Terrorism Act, the three Galwewa Siridhamma Thero and Jeewantha Gunathilake, Wasantha Mudali, were placed in custody for 90 days.

They and a group of other university student activists were arrested after holding a student protest in Colombo on August 18. Anyway, the court granted bail to the majority of those people and only these three were kept under long detention of 90 days. First they were taken to a detention center in Tangalle. However, since then they have been moved to other detention centers on several occasions. However, as time passed, after 50 days Hashantha Jeevantha got freedom. That is, he was released from the Tangalle Detention Center on October 7th. But the remaining two are kept in detention. They were detained and interrogated under the provisions of the Prevention of Terrorism Act No. 48 of 1979.

After the arrest of these student activists, the order to detain and interrogate them should be signed by the Minister of Defense. Accordingly, President Ranil Wickremesinghe is also the current Minister of Defense. But before he gave that order, many local and foreign parties had declared that such an order should not be given. International human rights organizations were the most prominent among those people. There, a leading diplomatic woman holding a certain special position made a very strong request. Her name is Mary Lawlor, United Nations Special Rapporteur on Human Rights Defenders. She posted a note on her Twitter account and said:

I am very concerned about the arrest of human rights defenders Vasantha Mudalige, Hashantha Jeevantha Gunathilake and Galvewa Siridhamma Thero under the anti-terrorism measures. I request President Ranil Wickremesinghe not to sign the detention orders of these three. If that happens, it will be a dark day for Sri Lanka…”

Somehow her request, holding such a responsible diplomatic position, her request was like cutting logs to a river. A few days later, President Ranil Wickremesinghe signed the detention order without considering these talks. Therefore, even today, at this moment, those student activists are in custody, suffering from many hardships. Meanwhile, at that time, various parties at home and abroad had made requests to the President, but they too were like straws cut into the river.

There, in the latest session of the Human Rights Commission, they were severely criticized for suppressing and punishing people’s activists and student activists. In an official announcement issued by the Commissioner of the United Nations Human Rights Commission, Michel Bachelet, she expressed her deep concern about this situation. Anyway, today in Sri Lanka too, this situation has received a lot of attention because recently the United Nations Sri Lanka office started a discussion with the student activists. In many countries of the world, there have been reports of UN authorities negotiating with student activists. But recently it happened for the first time in Sri Lanka. Let’s look at some of these events in the world.

The reports are as follows.

Turkey – In February 2021, the security forces arrested and detained a group of university students during the university student struggles against the current government of Turkey and the current president, Tayyip Erdoğan. The United Nations Human Rights Commissioner Michelle Bachelet immediately issued a statement to the Turkish government asking them to release the detained student activists. Accordingly, the Turkish president arranged to release a large number of those students. But another group of student activists are detained.

Nicaragua – In 2018, in the Latin American country of Nicaragua, three university students were shot dead during student protests against the then government and President Daniel Ortega. Also, 47 people were shot and killed during another mass struggle. The then and current UN Secretary General Antonio Guterres had ordered an international investigation into this.

Russia – In September 2022, nearly 2,400 young people were arrested for protesting against the Russian government’s new draft constitution. This protest was held especially against the country’s President Vladimir Putin. In this incident, the United Nations Human Rights Commission recently made a special statement and asked the Russian government to immediately release the protestors.

Iran – In a special statement, the United Nations Human Rights Commission requested the Iranian government take immediate action for the death of a 22-year-old young university student and the freedom of other arrested students in the student protests held in the capital of Tehran, Iran, since 2022.

India – In January 2020, many people who protested against the new Citizenship Amendment Act in India were arrested, and then a panel of United Nations human rights experts made a special statement to the Indian government demanding their immediate release.

CID is on the trail of Priyamali’s “gold bars”!