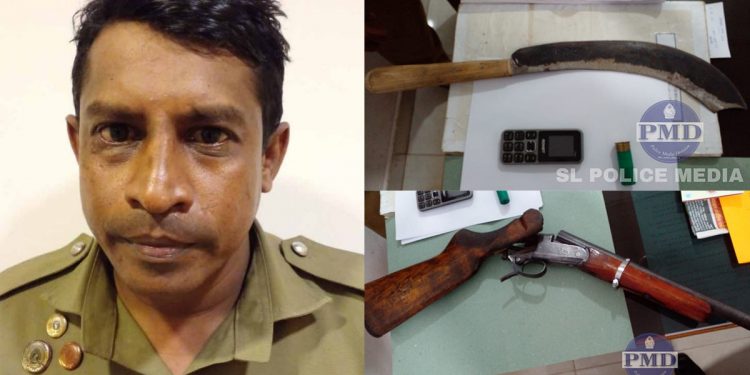 Two Rajanganaya people have been arrested, according to Tambuttegama Police.

The apprehended accused are 48 and 50-year-old Tambuttegama residents.

The police also seized a 12-bore pistol, one 12-bore ammunition, a manna knife, gloves, a mobile phone, and a motorcycle.

At roughly 02:00 pm today (26th), an attempt was attempted to commit this robbery in front of a renowned private bank in Tambuttegama town.

The two thieves, who arrived in a car to deposit money in the relevant bank, attempted to steal money from a well-known businessman operating in the Tambuttegama economic centre.

The criminals were armed with locally made 12-bore rifles and sharp knives, and they threatened and robbed the businessman.

Police Sergeant 42313 Buddhika Kumara of Tambuttegama Police Station, Miscellaneous Complaints Division, who was passing by when the two suspects robbed money, acted heroically and subdued these armed suspects and arrested them while also taking 223 lakh rupees into police custody.

At the moment, the robbers, who were also fighting with the police officer, pointed the pistol at the sergeant and attempted to activate it, but it did not work, according to the sergeant who witnessed the incident.

Sergeant Buddhika Kumara stated that the bandits also flung chilli powder in his face, but he was able to subdue the two criminals.

A group of officials, including Tambuttegama Police Station Officer NJ Athukorala, are investigating the event on the orders of Assistant Superintendent of Police Jeeva Hasanta Sirisena. According to LankaNews-Thisara Samal and the Police Official Website.