The “Rio” of Jaffna extinguished the embers of burning Point Pedro! He is now an adult! 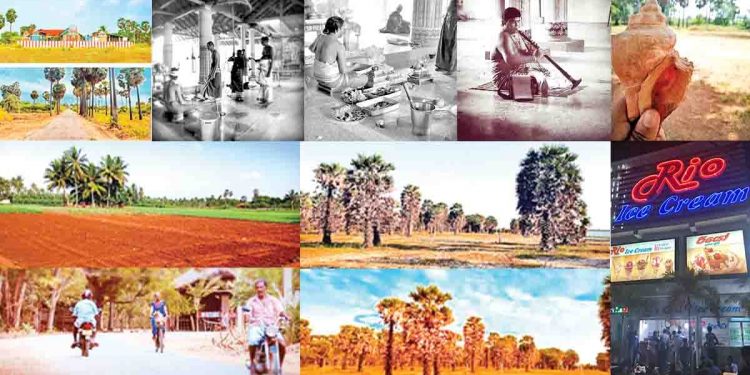 The destination of this trip is Putur via Point Pedro. 15 kilometers from Jaffna town, as far as I remember, it is a distance of twenty to thirty rupees. Puttur is an area in the eastern part of Jaffna called Vadamarach, with a very quiet rural environment. The harsh rays of the scorching sun is felt by all equally. However, Jaffna Penisula is is a collection of five parts with high and low caste divisions, which are not unified. That is Valikammam, Thenmarachi, Yalpanam, Vadamarachi and a group of islands. The brain of Jaffna was Vadamarachchi, or the city of dreams, the birthplace of the communal crisis. One should only ask someone from Vadamarachchi about it is known as the mastermind.

We who started the journey to Putur after boarding a bus at five o’clock is going to see the Sanghabhishekaya ceremony of his Tamil friend in the village temple. As is the custom, this guest wears jeans and a long-sleeved shirt while traveling in Jaffna. When looking at the guest’s Tamil colleagues, three or four of them are wonderfully dressed in sarees, with pots on their foreheads and garlands of flowers decorating their hair.

There are not many people on the bus going to Putur that day. All four of us sat in the back seat. As soon as the bus came out of the town and went forward along the Palali Road, the International Naga Vihara Shrine with a Buddhist Stupa appeared on the side. Then turn to the main road of Pontpedro. The visitor looking around sees the magnificent Nallur temple surrounded by majestic walls. Passing the Nallur Kandaswamy Kovil surrounded by high walls painted with red and white stripes, the famous Rio Ice Cream Factory is visible on the side.

With a unique flavor that is popular in Sri Lanka as well as abroad, north has many features that it can be proud of. Thousands flock to this city to enjoy not only the cultural identity unique to the north, but also the people and their excellent cuisine. Among them, the Rio Ice Cream brand has been serving the people for forty years. When this ice cream shop opened, no one would have dreamed of such growth. The small outlet has reached far and wide to the extent that visitors to Jaffna have made it a ritual to experience what they believe is one of the best ice cream shops in the country.

Despite being in business for over four decades, Rio was unheard of outside the peninsula. Rio Ice Cream’ has become so popular in a very short time that it has become synonymous with Jaffna. The unique taste of these ice creams has become a huge hit among all age groups visiting the peninsula. Although a little sweeter than one might like, the mix and variety of flavors attracts hundreds to its outlet.

There are four types of ice cream at Rio Special. It is vanilla, mango, fruit and milk flavored ice cream. Milk flavored ice cream is unique to Rio. It has an unusual taste. This unique flavor blends with the rest of the added flavors to make it a heavenly experience. The package doesn’t end there. Beneath the ice cream is a mixture of jelly and fruit. There are different flavors like blueberry, mango, chocolate, vanilla, cashew mixed. To experience these, you must come to Jaffna.

Then a few kilometers after the Rio ice cream shop, the statue of King Sankili at Chemmani junction. Next is the mansion called ‘Mantri Manei’ of the minister of King Sankili. As soon as there are many tourist spots etc., the earlier slowness of the bus is reduced and it moves faster.

That is the bus bell. Palm groves on both sides of the road, herds of cattle and goat herds, fertile potato, onion, carrot and okra plantations. No matter how hot the sun is, the curiosity of the visitor is the best. speed of the bus, reduced and cyclists look at the bus stop them by the side of he bus by now About an hour has passed.

That is the destination. Disappearing from the dust is the nearest bus. So we started walking to the temple. No doubt it will be an amazing experience. Side roads bathed in dust. Cultivated land on both sides of the road. They said that the land of Jaffna has never belonged to them.
The temple was near a big banyan tree. On the side is a big tamarind tree. A cow with a bell running restlessly. I don’t know if it is because of the arrival of this new guests.

It is said that Sanghabhisheka or Kumbhabigasegam or the annual anniversary of the temple is performed using one thousand and eight Valampuri or cockles. A small pile of fire in front of an idol of Shiva. A flutist on the side. A drummer. The pooja started with the rhythm of both of them harmonizing the tones. The priest throws various things into the fire and mutters texts. They are burnt up by the flames like the ashes. The purpose of the sacrifice is the same. Beliefs are wonderful.

Another bathes the idol of Shiva with great devotion in yellow liquid, cow’s milk, orange, herbs and fruit juice. Four persons dressed in topless with vetti carry an idol of Ganadev around the temple sitting on an asana, holding it on their shoulders and saying something. On the side was a kolam pattern. That is another question for me.

Yellow, red and green kolam patterns are made using rice (rice), rice ma (rice flour) and thengai poo (coconut). Mostly dark color. That is their choice. Often the pattern drawn using rice is dyed with pigments, but is an excellent meal for insects and ants. Traditionally set up on the threshold of a house or during ‘Brahma Muhurtam’ (the time of the descent of the gods), kolams are often seen all over Jaffna as hand-painted designs using rice. They are experts in wearing kolams.

The color combination is perfect. First draw the pattern with a chalk stick. Then the kolam starts. They say that every dot, line, curve, circle, triangle and square are symbols representing the fundamental energies of the universe. Next to the kolam pattern is a pongal rice. It is a delicious concoction of sugarcane, mung nuts, succulents, cow’s oil, cashews, coconut milk and new rice.

Hindus used to apply cow dung to start a religious ceremony. Then rice was sprinkled at the entrance. They believe that eventually the process of threshing rice transformed into kolam. Kolams are worn to welcome Lakshmi, the goddess of prosperity, into the home and ward off evil spirits. Another purpose is to add aesthetic value to the home.

Another interesting aspect of the stunning kolam is the science and math foundation on which these designs are built. The design is built on a grid of dots. It is based on series, algebraic and numerical principles. Columns illustrate the geometric properties of symmetry, periodicity, repetition and rhythm. It’s amazing that all those who don’t have an understanding of the math and concepts are dealing with it.

Padi kolam is a design made on Fridays. Especially designed to welcome Goddess Lakshmi, who represents wealth. Chikku or Sikku Kolam is made in an intricate pattern of curved lines around the dots. It is difficult to find the starting and ending points of the pattern in this model. The pattern is made around the dots with a grid of dots called pulli kolam. Kolams are made to welcome friends and relatives on special occasions using elements like ‘welcome’, lotus, swan and lamp.

Many questions have been answered. Two hours have passed. Calm me turning restless gradually. The people of the temple are also increasing one by one. Their eyes were fixed on this stranger rather than the sacrifice.

By the time the pooja was over, the sun had already risen.

Now comes the most interesting part of the journey. Lunch at the temple. All are seated in the temple itself. While one carries the banana leaves, the others share the curry. A rather large red rice called ‘Mottakarumpan’ rice. A fried chilli pod with some curries and papadam. Not to mention the taste. Even getting back up is difficult. After the meal it is time for palaharam i.e. sweetmeats. Grains are motagam with coconut nectar. It is said to be the favorite food of Ganadev. Dates are another dessert with bananas. Name unknown. Its taste still excites my taste buds.

So, after a gap of one year, the Sangabhishek festival in Putur ended like this.