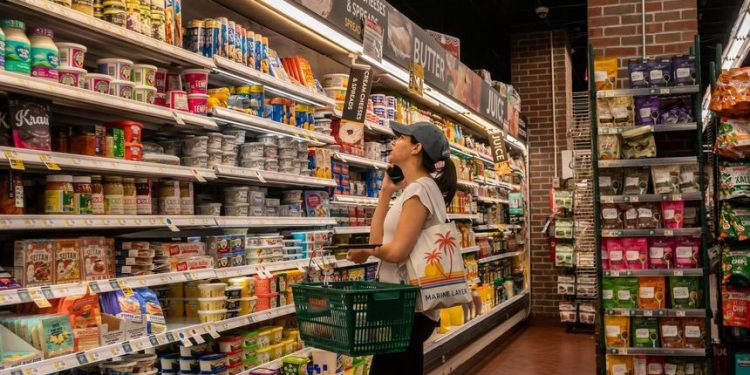 Stagflation—a mix of stagnating growth and rising prices—has been generally viewed as a relic of the 1970s. But economists are warning it could be making a comeback.

The term is broadly defined as sluggish growth tied with rising inflation. The term was widely used in the 1970s, when U.S. consumers lined up to fill their cars with high-price gasoline and the jobless rate hit 9%.

But an expected weak reading on economic growth could raise the specter of stagflation again.

Stagflation also puts the Federal Reserve in a bind because the central bank’s job is to keep both inflation and unemployment low. The Fed can raise interest rates to curb inflation by depressing spending, hiring and investment—a path it has started on and intends to continue this year. But if it moves very aggressively it risks tipping the economy into a recession.

Why is stagflation a risk now?

Annual U.S. inflation is at a 40-year high and parts of the economy are cooling as interest rates rise. Home sales have fallen in recent months, consumer spending growth has slowed and job gains have lost steam since the start of the year. Supply chains remain disrupted by the war in Ukraine and production problems related to the Covid-19 pandemic.

Are we in a period of stagflation?

We might be. Economists surveyed by The Wall Street Journal expect the economy barely grew in the second quarter after contracting at a 1.6% annual rate in the first three months of the year. They forecast gross domestic product, a broad measure of the goods and services produced across the economy, expanded at an inflation and seasonally adjusted annual rate of 0.3% from April through June.

There is no mathematical formula that defines whether we are experiencing stagflation, but economists generally agree that it would be a sustained period of both high inflation and slow growth, not just one or two quarters.

There are similarities between the situation in the 1970s and today. Surging prices for oil and food are pushing up the cost of living, and business executives are voicing concerns about the outlook for the economy.

But the key difference between the situation in the 1970s and today is employment. During the 1970s and early 1980s, the unemployment rate at times was around 10%. It was just 3.6% in June 2022 for the fourth month in a row. U.S. layoff announcements, for now, are few and far between.

What is the difference between stagflation and inflation?

Inflation refers to an increase in prices for goods and services. Stagflation is a situation in which prices are rising rapidly, but demand is weakening and economic growth is slowing or contracting. As a result, businesses make less money and cut jobs, driving up unemployment. At worst, that pushes the economy into a recession.

The Fed likes to see a bit of inflation. It targets 2% inflation a year, because that signals healthy demand in the economy. But if inflation rises too quickly, the rapid price increases erode households’ purchasing power.

Consumer prices rose 6.3% in May from a year earlier, as measured by the Fed’s preferred gauge, the Commerce Department’s personal-consumption expenditures price index. Another, more widely followed gauge, the Labor Department’s consumer-price index, rose 9.1% in June.

Has stagflation happened before?

Yes, stagflation occurred from the early 1970s to the early 1980s, when surging commodity prices and double-digit inflation collided with high unemployment.

British Parliamentarian Iain Macleod is credited with first using the word stagflation in 1965. “We now have the worst of both worlds—not just inflation on the one side or stagnation on the other, but both of them together. We have a sort of ‘stagflation’ situation.”

Its seeds were planted in the late 1960s, when President Lyndon B. Johnson revved up growth with spending on the Vietnam War and his Great Society programs. Fed Chairman William McChesney Martin, meanwhile, failed to tighten monetary policy sufficiently to rein in that growth.

In the early 1970s, President Richard Nixon, with the acquiescence of Fed Chairman Arthur Burns, tried to tame inflation by imposing controls on wage and price increases. The job became harder in 1973 after the Arab oil embargo drastically drove up energy prices and overall inflation. Mr. Burns persistently underestimated inflation pressure: In part, he didn’t realize that the economy’s potential growth rate had fallen and that an influx of young, inexperienced baby boomers into the workforce had made it harder to get unemployment down to early-1960s levels.

As a result, even when the Fed raised rates, pushing the economy into a severe recession in 1974-75, inflation and unemployment didn’t fall back to the levels of the previous decade.

The stagflation of the 1970s ended painfully. Fed Chairman Paul Volcker drastically boosted interest rates to 20% in 1981, triggering a recession and double-digit unemployment.

The “Rio” of Jaffna extinguished the embers of burning Point Pedro! He is now an adult!