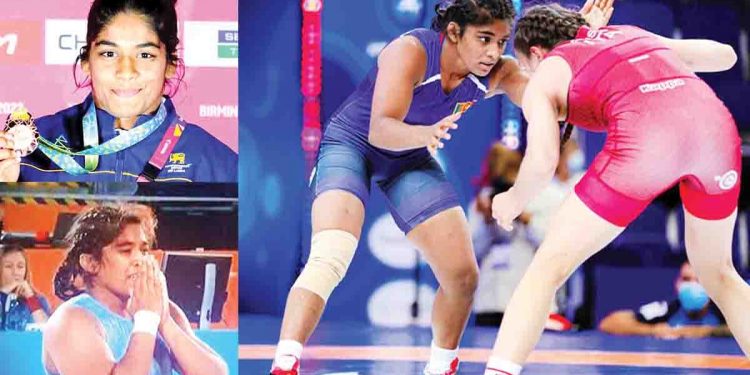 Jack fruit, bread fruit and yam were her nutrition
No ‘dojo’ for practices
Sheer motivation and dedication

All set for the wrestling ring at the Commonwealth Games. A slender young woman wearing a yellow dress. With huge experience behind her. The announcer describes about her credentials ‘this Australian player is a player who has won many medals. She is an experienced wrestler with many achievements. She has a high chance of winning this match’.

The Australian athlete has already won before the start of the match according to the presenter. Nethmi Ahimsa is behind her. She represents the small island of Sri Lanka. This player who came from a distant island is underestimated even before the competition started. The announcer says her name is ‘Nethmi Ahimsa’. She is very young. Still 18 years old. No experience.

No wins. No major level medals won. The commentator has already defeated Nethmi before the match could stated. But we had trust in her talent, the ability of our girl. Netmi’s coach and his assistants are shouting in Sinhala. In pure Sinhala. Win, block hard, work only where you want… those people spoke from their heart. When listening to the language of the heart, as listeners all get to a momentum.

Nethmi fought as best as she could among the so-called great players in a far away country in a country where Ahimsa was unknown. However, she finally brings a bronze medal for our little country. Before the start of the match, the announcer who handed over the victory to the Australian player says a word that will never be forgotten in our lives. ‘Small countries can achieve great achievements’.

This man may not remember that this small country won the World Cup in 1996 by beating the mighty Australians were wearing the same yellow dress. Maybe he doesn’t know that in 2014 we won the T-20 cricket world cup, defeating a big mighty, India. We are not small. It is true that it seems so. But there are many things we can do. But there is a story to tell.

A famous journalist named Nuvan Jude Liyanage once made a video on YouTube showing Suranga Sir the coatch and Nethmi and others practicing in a tin shed built next to Velpalla Maha Vidyalaya. Suranga was someone who saw the value of Netmi Ahimsa Poruthota before she wore the Commonwealth medal around her neck. In those videos, Nethmi was training hard without a proper practice mattress.

It was Nethmi who trained like that and brought home a bronze medal for Sri Lanka. Fortunately, Nethmi gets the opportunity to receive training abroad. That’s a different story. Nethmi has not been able to build a proper house yet. After Nethmi’s victory, we saw how in Nethmi’s little house she had written about her Olympic dream on the walls. But most people in our country did not even know where this little girl was. I, am the writer of this article, am one of those who did not know that.

Although Nethmi and other players gets a practice mattresses, Suranga Sir and Nethmi have no place to use them. Finally Nethmi and team has to go to Velpalle temple. But even if it is allowed in the Velpalle temple, after a few days the temple says that the noise disturbance is too much, so it should be stopped. After that, Suranga Kumara goes to the village paddy field. It is not possible to practice sports on a rainy day in the paddy field. Because of that, practices has to be stopped on rainy days.

Therefore, the work cannot be done properly. The ‘kamatha’ come to the rescue of these children. But, it will not be a successful option. After that, Nethmi and Suranga Sir get a chance to go to a building somewhere near by. But they had to leave that building too soon. Finally, it was at Suranga Sir’s house that a shed was built for Netmila to practice. It is very primitive and not looked a good ‘dojo’. The people of the village and those who came from the village got together and started completing this work at Suranga Sir’s house.

Suranga Sir clearly says that Nethmi and the rest did not get to eat big nutritious foods. We gave these children ‘jackfruit’, ‘polos’, yams and sweet potatoes . Nethmi, who ate jackfruit, pollos, potatoes and sweet potatoes, has managed to shine the name of Sri Lanka in front of the world today. Nethmi is still 18 years old. Nethmi still has long way ahead. The Australian player who lost to Nethmi is 30 years old. She has a lot of experience.

She has many achievements. All the nutrition and training she gets is more than meets the eye. But the fact that Nethmi won this victory for Sri Lanka at the age of 18 means that Nethmi will be able to do a greater work tomorrow. Along with Nethmi, there are two other athletes who have won gold medals. As a country, we need to look for them.

It is certain that these children will be able to make this country shine. Pelpalla school mothers deserve more of that respect. This little school, which none of us know about, has become a school that the whole country knows about. That bronze medal, which is carefully kept in Nethmi’s little house today, brought pride not only to Nethmi but to the whole country.

We wish the ‘Motherland’ that Nethmi, Suranga sir, and the other girls and boys who are with Nethmi be successful in their endeavors.

The gift of the lamp of life

An interview with the president of Sri Lanka

What Sri Lanka’s economic crisis looked like from the sky