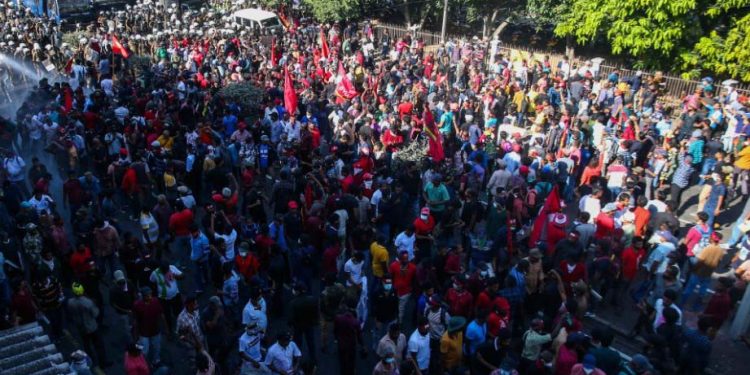 While multibillion-dollar loans have stabilized the nation from the depths of its crisis, a lack of reforms and further economic hardship could send protesters back to the streets.

Sri Lanka, the tropical Indian Ocean island of 22 million people, was once a model for developing countries. In early 2022, however, a widespread fuel and food crisis led to national protests that brought the ouster of President Gotabaya Rajapaksa, who temporarily fled the country in July. Just three months earlier, Sri Lanka defaulted on all its external debt of an estimated $50 billion. In May, it declared bankruptcy.

As if the domestic economic and political crises were not enough, six-time prime minister and current President Ranil Wickremesinghe has a tough task ahead of him internationally as well. The good news is that Sri Lanka is on course to win approval for a desperately needed $2.9 billion loan from the International Monetary Fund. The IMF, however, has made it clear that Sri Lanka needs to restructure its debts with China and other creditors as part of the bailout agreement. The IMF board, after receiving staff-level approval, is expected to make a final decision later this year.

Like other Asian countries, Sri Lanka is heavily indebted to China, giving Beijing clout. Despite pressure from India and the United States, two nations whose support Colombo needs, Sri Lanka allowed the docking of a Chinese spy vessel at the port of Hambantota.

Popular anger and analyses blame the Rajapaksa family dynasty for Sri Lanka’s crises. Besides Gotabaya Rajapaksa, who served as president from 2019-2022, his elder brother, Mahinda, was president from 2005-2015. A third brother, Basil, served stints as finance and economic minister during his brothers’ presidencies. Other relatives have also held key government posts.

The populist politicians promoted ethnoreligious nationalism to get elected, a phenomenon familiar to voters on the South Asian subcontinent. Sri Lanka, however, has endured decades of war, venal politics, nationalism, corruption and economic mismanagement.

Sri Lanka has one of the highest human development indicators among developing countries, with an adult literacy rate of 92 percent and basic healthcare available to 96 percent of the population. In 1964, Singapore’s founder, Lee Kuan Yew, hoped his country would one day be like Sri Lanka. The country’s elite, however, failed to take advantage of this human capital and instead chose the path of populist economic nationalism and ethnic majoritarianism.

Sri Lanka was first colonized by the Portuguese in 1505, by the Dutch in 1658, by the British in 1796 and gained independence in 1948. The island used to be called Ceylon.
Lipton Tea was founded in Sri Lanka. In 1890, Glasgow-born grocer Sir Thomas Lipton purchased 5,500 acres of the Dambatenne Tea Factory in Ceylon’s high country and began exporting it directly to his shops in the United Kingdom.
Cinnamon is also a popular crop.
Sri Lanka has a literacy rate of 92%, the highest in South Asia.
The word serendipity is derived from Serendip, the old name of Sri Lanka given by Arabs and Persians.
The economy is expected to contract by nearly 9 percent in 2022 while inflation has reached 60 percent.
Remittances sent home by Sri Lankans working abroad amount to nearly 9% of GDP.
Vast structural problems sink the economy

Underinvestment in infrastructure, nationalization of industry, and a paternalistic bureaucracy place Sri Lanka along with many other developing countries where excessive government centralization and control over the commanding heights of the economy prevented economic growth. Sri Lanka’s economic crises are structural, reflected in the fact that this is the country’s 17th loan from the IMF since 1965.

The nation, which is dependent on tourism, trade, and money sent home from workers abroad, has suffered greatly from the Covid pandemic and Russia’s war on Ukraine. Tourism and foreign remittances have long been Sri Lanka’s primary sources of revenue. From a high of $7 billion in 2014, remittances dropped to $5.49 billion in 2021. Similarly, in 2018, Sri Lanka’s tourism industry generated $4.4 billion in revenue but plummeted to $200 million by 2021.

Russia’s invasion of Ukraine only exacerbated the supply chain crisis and fuel shortages in Sri Lanka, as in other parts of the world. Further, Russia was the second-biggest market for Sri Lanka’s tea exports and Russians and Ukrainians have historically been the largest number of non-South Asian tourists in the country.

At a time of global food shortage, Sri Lanka’s excessive inward focus and attempts at indigenization – in the agrarian sector especially – only increased the pain for the average citizen. In 2021, as the country’s foreign currency challenges grew, the government chose to ban fertilizer imports and asked farmers to use local organic fertilizers.

This sudden shift at a time when most farmers were dependent on chemical fertilizers led to a drastic fall in crop yields and shortages, especially in tea – a top export – and rice, a food staple. Rice production declined by 20 percent, forcing Sri Lanka to go from self-sufficiency to rice imports.
Low taxes, high debt
Historically populist politics have ensured that Sri Lanka has one of the lowest tax-to-GDP ratios in the world, hovering around 8 percent. Instead of bringing government spending in line with revenue collection, Sri Lankan politicians have preferred to borrow heavily.

In 2019, in another populist move, massive tax cuts were adopted that cost the government $1.4 billion annually – a big hit in a nation that had a GDP of only $81 billion in 2020. (That translated into a per capita annual income of roughly $13,000 in purchasing power parity.) This decision also resulted in global agencies downgrading Sri Lanka’s credit rating, limiting the government’s ability to raise funds in international financial markets.

Lacking access to credit lines, the government used its dwindling foreign exchange reserves to pay for food and other essentials. Sri Lanka was importing $3 billion more annually than it exported, depleting the country’s foreign currency reserves that plummeted an astounding 99 percent from 2019, when they stood at $7.6 billion, to only $50 million in July 2022.

Further, as a mid-income country, Sri Lanka no longer had access to loans at concessional rates from multilateral institutions, like the World Bank. So, the country went for higher-interest commercial loans and borrowed heavily, including from China. Foreign debt stood at 42 percent of GDP in 2019, but rose to 119 percent of GDP by 2021.

Populist policies also meant that Sri Lanka’s elite – like in other South and Southeast Asian polities – borrowed heavily from China for infrastructure projects. Successive Sri Lankan leaders chose to build shiny white elephants that were economically unviable. The result, in 2017, was that China acquired a 99-year lease over Hambantota – a southern port – in lieu of repayment for their loan to Sri Lanka.

The nation appears to have settled into an uncomfortable status quo. The IMF’s recent bailout package of $2.9 billion, along with $4 billion that India has already provided, will temporarily sustain the Wickremesinghe government. However, the IMF loan is contingent on the government enacting strict economic measures that will be challenging. The detailed measures outlined by the IMF are meant to help Sri Lanka “restore macroeconomic stability and debt sustainability, while safeguarding financial stability, reducing corruption vulnerabilities and unlocking Sri Lanka’s growth potential.”

Popular resentment is still simmering across the country and has only been subdued through brute force by the army. If the government implements strict economic measures mandated by the IMF, it risks further unrest in society.

The more likely path, therefore, as in the past, remains using the aid and bailout money to paper over the current crisis and stall much-needed reforms. That the IMF loan came through despite the organization’s warnings about the lack of reform shows that the U.S. and India view the crisis as an opportunity to wean Sri Lanka away from China.

A less likely scenario is increasing chaos and political instability. Inflation, fuel prices, and shortage of food supplies continue to plague many countries. While the economy is improving in Sri Lanka, the top drivers – tourism, remittances and exports – will not return to pre-pandemic numbers anytime soon, if ever.

If the government is unable to provide immediate relief to the average citizen, protesters may return to the streets and prompt the authorities to use the military for a crackdown on demonstrations. But the government cannot be assured of the military’s loyalty. There are two possibilities – the military helps and then goes back to their barracks, or the military sides with the demonstrators and refuses to help the government, forcing Mr. Wickremesinghe from office. The president has never been a popular leader because most Sri Lankans view him as being too close to the hated Rajapaksas.

The least likely scenario is the return of the Rajapaksas. While Mr. Gotabaya fled the country in July, he returned to Colombo at the end of August, was feted upon arrival by his allies and is currently living in a residence, with security provided by the Wickremesinghe government.

Mr. Wickremesinghe is president primarily based on support from the Rajapaksas’ party and so the more unstable the country becomes, the more likely that the party, and its supporters, will seek the return to power of one of the Rajapaksas.
(curtesy gisreportsonline.com)

The cabinet decides to give one crore compensation to MP Athukorala!