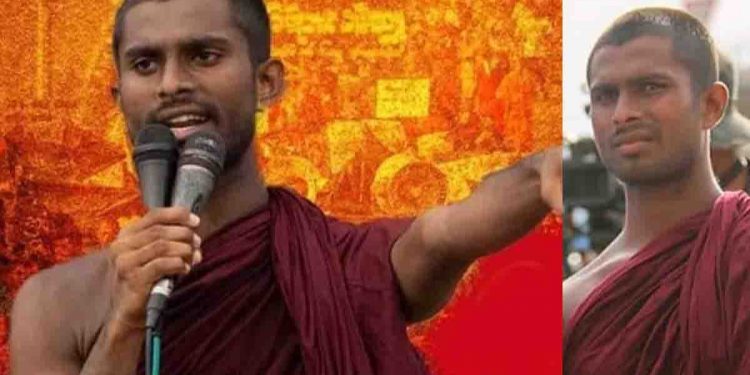 Venerable Galwewa Siridhamma Thero was remanded to the 6th of December by the Kaduwela Magistrate’s Court on Wednesday (23).

Granted Bail in the Morning:

Venerable Galwewa Siridhamma Thero, the converner of the Inter-University Bhikku Federation was released on bail on Wednesday (23).

The Venerable Thero was detained for 89-days under the Prevention of Terrorism Act and was thereafter remanded along with the Convener of the Inter-University Student’s Federation Wasantha Mudalige.

Venerable Galwewa Siridhamma Thero was released on two personal bails of Rs. 500,000/- each.

Bail was granted by Colombo Additional Magistrate T. N. L. Mahwatte and the Thero was produced to the Magistrate at her chambers with his face covered.

He therefore, requested the court to release Venerable Galwewa Siridhamma Thero on bail.

The Venerable Thero was ordered to appear at the CID once a month.

In addition, he was prevented from travelling overseas and was barred from making any comment on the legal matter to the media.

He was warned that if he conducts himself violently again, his bail will be canceled and he will be returned to remand custody.

Siridhamma Thero and Wasantha were questioned for five hours throughout their ninety-day detention!

Join us to solve the ethnic problem after the budget