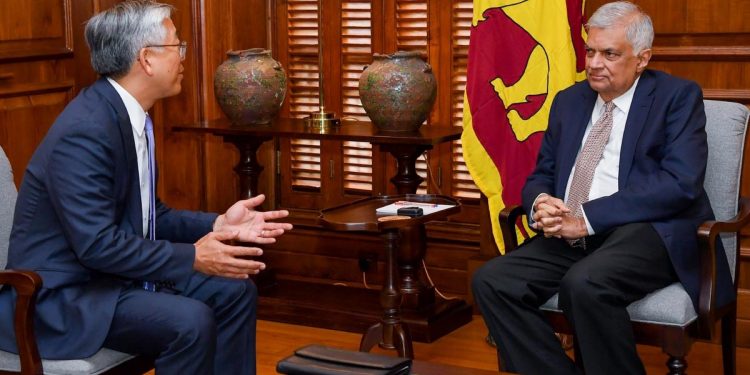 Assistant Secretary of State for South and Central Asian Affairs Donald Lu has assured to support Sri Lanka during this difficult period.

He is currently on an official visit to Sri Lanka, and met with President Ranil Wickremesinghe on Wednesday (19).

While appreciating the President’s efforts in rebuilding Sri Lanka’s economy he said that President Ranil Wickremesinghe is the right person to get the country out of the present crisis and assured him that he has a force backing him.

He also stated that the U.S. government would continue to assist Sri Lanka with their negotiations with the IMF and the debt restructuring talks.

During the discussion President Wickremesinghe also expressed his appreciation to the US Government for their continuous support towards Sri Lanka.

The Assistant Secretary further stated that the US government is expected to provide all possible support to Sri Lanka and its people in this difficult period and welcomed the President’s efforts in regard to reconciliation and strengthening of the Democratic institutions.

The Assistant Secretary of State for South and Central Asian Affairs of the United States, Donald Lu also met with the Secretary of Defence General Kamal Gunaratne at the Sri Jayawardenepura Defence Headquarters Complex in Kotte.

The Ministry of Defense stated that General Kamal Gunaratne received Assistant Secretary Lu and the Ambassador of the USA, Julie Chung.

General Kamal Gunaratne also presented a commemorative gift to Secretary Lu to mark the occasion of his first visit to the Defense Ministry.

The US Ambassador Chung said that Secretart Lu and herself met with civil society leaders to discuss current challenges and how the multiple parties can work together to promote accountability and inclusive governance in Sri Lanka.