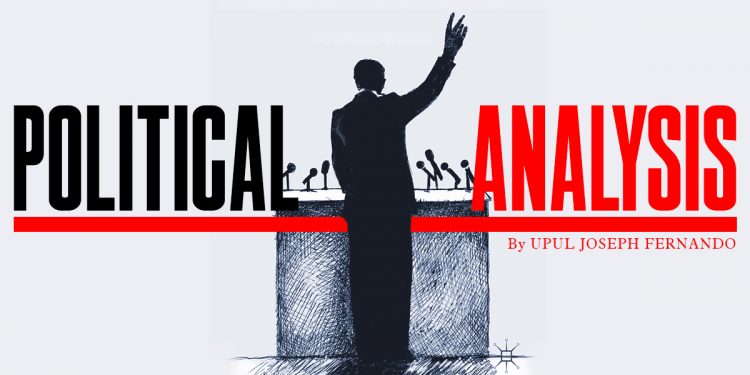 Sri Lanka, in the midst of a crisis, announced its first election last Wednesday after the president fled. This is the first test of the popularity of Ranil Wickremesinghe, who became the President after Gotabhaya..

This is the story that the international media told about this election as soon as the election commission set the date for the election. But Ranil told a different story.—

I have not been given a mandate to conduct elections. I have been given the mandate to recover the country…’ This is the story of Ranil.

There was a massive attack on this story through social media.

‘Who gave this mandate…?’

This is the common language of that attack. The story is true. In the 2020 general election, Ranil asked for a mandate to become an MP. The people did not even give mandate to Ranil to become an MP. Ranil then went to parliament from the national list. After that Ranil was given a mandate by Rajapaksa to become the Prime Minister. He gave a mandate to be president. It was not the public but the Rajapaksas who gave that mandate.

On 02 March 1991, State Defense Minister and Foreign Minister Ranjan Wijeratne was assassinated on the Colombo highway. He was killed by LTTE. By a suicide bomber. Not only the government but also the country was shocked by that murder. The Premadasa government, which was in power at this time, was preparing for the by-election. Ranjan Wijeratne was not only the Minister of State Defense and Foreign Affairs, but also the Secretary General of the party that represented the government in power. The killing of Ranjan shocked not only the government but also the leaders of the opposition. But they were not afraid of Prabhakaran’s human bomb. The 1991 by-election was held on the scheduled date.

LTTE bombed the Central Bank of Colombo in 1996. The whole country was shocked by that attack and since then bombs exploded in Colombo and thousands of people died. But it was not an obstacle to hold the mini elections in 1997. The 1997 mini-election was held on the scheduled date.

In 2001, the LTTE attacked Katunayake Airport in Colombo, and Sri Lanka fell from all four corners. Due to the poor financial management of Chandrika’s government and the LTTE attacks, the economy became negative for the first time in the history of Sri Lanka. That means it went down to zero. The opposition brought a motion of no confidence against Chandrika’s government. Chandrika dissolved the parliament and went to a general election even though the economy was negative.

With that vote, Ranil of U.N.P became the Prime Minister. A government was formed. Ranil was grumbling about economic difficulties since the government took over. Ranil held the by-election in March 2002 saying ‘the treasury is empty, there is no money’. Despite the fact that the economy has plunged into the negative value, the small vote was held three months after the formation of the government.

‘So how can he say that there is no mandate to a vote now…?’

The biggest blunder committed by the Rajapaksa is the postponement of the mini election that was supposed to be held in 2022. At that time, if they had gone to a small vote, it would have happened before the struggle. If they had gone to the polls before the struggle, the Podujana Peramuna could have won some small victories, although not by a large margin. Then there is no room for struggle.

At that time, Ranil played a big game to hold the Rajapaksa and postpone the small vote. The reason is that Ranil knew that after the defeat of the general election in 2020, if he goes to any election, the UNP will lose the 02 lakhs that it polled in 2020. The Rajapaksa’s also postponed the small vote by a year to protect themselves and Ranil too. If there had been a small vote, the Rajapaksa could have lost some of the local government bodies they won in 2018. The Rajapaksa’s lost the presidency and the government by not having polls.

‘What will happen to Ranil if he skips this vote saying there is no mandate…?’

As soon as Ranil became president, he said that a referendum was needed to change the electoral system, knowing that whether there was a small vote, a provincial council vote, a general vote or a presidential election, the UNP would lose its roots. Ranil’s favorite vote is the referendum. Because parties do not present candidates for referendums.

He, and his UNP tremble with fear for their lives when votes are held. In fact, he is ruling this country today with a group of advisers who lost the 2020 general election with the deposits, members from the national list who do not represent recognized political parties in the country, and a group of elected members who do not represent either the Podujana Peramuna or the opposition, which holds the majority in the parliament, as ministers. When elections come, they tremble as if they have pneumonia. The reason is that these ministers will not get nominations from any party in the election. These ministers are political orphans.

‘Can such orphans who have no people’s mandate build a country…?’

Today the International Monetary Fund, the World Bank and America, India and China are asking this question. First, Ranil tried to postpone the vote. If the vote is postponed, it is certain that the financial fund will not give relief. If the devil dance starts by postponing the elections and arresting the activists, the struggle will come back in a fierce form.

Ranil’s mandate should refer to the 134 Podujana Peramuna members of Parliament who voted for Ranil are the ones who promised people they would stop selling public resource done by Ranil’s government, when he was  Prime Minister during the period of 2015-2019. It has been promised that Ranil will be responsible for the central bank robbery and that Ranil will be punished for it. Like Ranil’s government, they will not surrender to the IMF. It has been promised to cancel the Sri Lanka-Singapore trade agreement. The people gave the mandate to fulfil those promises. Now they are breaking all those promises with  Ranil as President.

What Ranil should do is immediately get a mandate for him to fulfil IMF conditions, to sell public resources, to enter into trade agreements. This little vote is the best opportunity for that.

The choice is Ranil’s.

A shooting attempt at Gota’s home! A bullet has been missing!