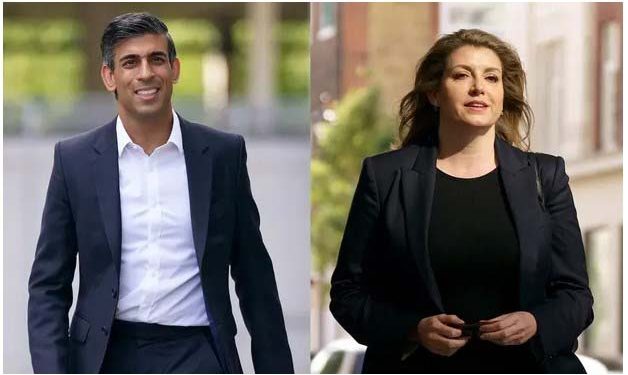 Now that the former chancellor’s two leadership rivals have pulled out, Conservative members will not have a say in the contest

Rishi Sunak has become the new Conservative leader and will be prime minister after Penny Mordaunt followed Boris Johnson in withdrawing from the running, minutes before the party was due to announce how many MPs had backed each candidate.

In an apparent acknowledgement she had not reached the necessary 100 MP threshold to progress, two minutes before the nomination process closed at 2pm, Mordaunt tweeted that she had pulled out, and that Sunak had her “full support”.

He will formally take over as prime minister from Liz Truss imminently, most likely on Tuesday, at which point Truss would have served 50 days in the job.

Sunak, the former chancellor who came second in the leadership contest against Truss in the summer, had secured the backing of more than half the parliamentary party by Monday morning.

Sunak, whose parents are of Punjabi Indian heritage, will become the first person of colour to become UK prime minister. He is not the first minority ethnic PM – Benjamin Disraeli, who held the office twice between 1868 and 1880, was of Jewish heritage.

In her statement, Mordaunt said: “These are unprecedented times. Despite the compressed timetable for the leadership contest it is clear that colleagues feel we need certainty today. They have taken this decision in good faith for the good of the country.

“Members should know that this proposition has been fairly and thoroughly tested by the agreed 1922 [Committee] process. As a result, we have now chosen our next prime minister. This decision is an historic one and shows, once again, the diversity and talent of our party. Rishi has my full support.”

The candidates had been due to submit their nominations from at least 100 MPs by Monday at 2pm, but Johnson pulled out on Sunday night, saying he had reached the threshold but it was not enough to cement party unity. As Sunak is the only remaining candidate in the race, the 150,000 Tory members will be denied a say on who becomes the next prime minister.

However, Conservative MPs made clear that Sunak was their preferred choice, after members previously picked Truss, whose disastrous 44 days at the top led to financial turmoil and her resignation last Thursday.

Sunak’s ascent to the top job in No 10 after just seven years as an MP and two in the cabinet is a remarkable rise. He was made chancellor by Johnson just before the Covid pandemic and is known for launching the furlough scheme to protect jobs, as well as backing the controversial “eat out to help out” initiative that some blamed for fuelling a further wave of infections.

A former Goldman Sachs analyst and hedge fund manager, Sunak is believed to be the richest MP and was almost written off as a leadership candidate earlier this year following a furore over his wife’s non-dom tax status and the revelation that he held a US green card while a minister.

In these perilous times, a truth-seeking global news organisation like the Guardian is essential. We have no shareholders or billionaire owner, meaning our journalism is free from commercial and political influence – this makes us different. When it’s never been more important, our independence allows us to fearlessly investigate, challenge and expose those in power.