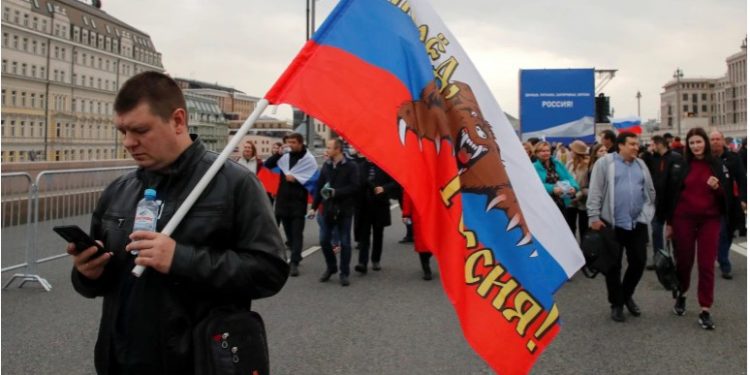 The move has been condemned by Ukraine and Western countries and represents a major escalation in the seven-month war.

Russian President Vladimir Putin has proclaimed the annexation of four partially occupied Ukrainian regions at a signing ceremony in the Kremlin.

Ukraine, Western countries and the United Nations secretary-general have denounced the move, which represents a major escalation in the war that began with Russia’s invasion on February 24.
At the ceremony on Friday, Putin said Russia has “four new regions”, calling the residents of Ukraine’s occupied Donetsk, Luhansk, Kherson and Zaporizhia regions “our citizens forever”.

“This is the will of millions of people,” he said in the speech before hundreds of dignitaries at the St George’s Hall of the Kremlin.

“We will defend our land with all our strength and all our means,” he added, calling on “the Kyiv regime to immediately cease hostilities and return to the negotiation table”.

In one of his toughest anti-American speeches in more than 20 years in power, Putin signalled he was ready to continue what he called a battle for a “greater historical Russia”, slammed the West as neo-colonial and as out to destroy his country, and without evidence accused Washington and its allies of blowing up the Nord Stream gas pipelines.
The signing ceremony came three days after the completion of Kremlin-orchestrated “referendums” in the four regions, which are largely or partly occupied by Russian or Russian-backed forces.

Moscow’s proxies in the occupied regions have claimed majorities of up to 99 percent in favour of joining Russia. Western governments and Kyiv have dismissed the hastily organised votes as breaching international law, and charge they were coercive and wholly unrepresentative.

Shortly after the ceremony, Russia vetoed a UN resolution that would have declared its referendums as having “no validity” and urged all countries not to recognise any “purported annexation” of the territory by Moscow.
The vote on the resolution in the 15-member Security Council was 10-1, with China, India, Brazil and Gabon abstaining.

US Ambassador Linda Thomas-Greenfield said before the vote that in the event of a Russian veto, the US and Albania – which sponsored the resolution – would take it to the 193-member General Assembly, where there are no vetoes, “and show that the world is still on the side of sovereignty and protecting territorial integrity”.

‘Most serious escalation of the war’
Earlier on Friday, the Kremlin warned that Ukrainian attacks against any of the annexed regions would be considered aggression against Russia itself. In his speech, Putin said Russia would defend its new territory with all the means at its disposal.

The exact details of Russia’s annexation remain unclear but it appears that Russia is laying claim to about 109,000sq km (42,000sq miles) of Ukrainian territory, or about 18 percent, in addition to Crimea, which Russia annexed in 2014.

If Russia could establish control over the whole area it claims, Putin would have annexed about 136,000sq km (52,510sq miles) or more than 22 percent of Ukraine, whose borders Russia recognised in a treaty after the fall of the Soviet Union.

The United States and United Kingdom have announced new sanctions against Russia in response to the move, which US President Joe Biden said would hurt those who provided political or economic support to the annexation drive.

“We will rally the international community to both denounce these moves and to hold Russia accountable. We will continue to provide Ukraine with the equipment it needs to defend itself, undeterred by Russia’s brazen effort to redraw the borders of its neighbour,” Biden said in a statement.

NATO chief Jens Stoltenberg accused Putin of provoking “the most serious escalation” of the war since it began on February 24, but said he would not succeed in deterring the alliance from supporting Kyiv.
In Ukraine, President Volodymyr Zelenskyy said he was only ready for peace talks if and when Russia got a new president.

He also announced that Ukraine was formally applying for fast-track membership of NATO, something Moscow fiercely opposes, and accused Russia of redrawing borders “using murder, blackmail, mistreatment and lies”.

He said however that Kyiv remained committed to the idea of co-existence with Russia “on equal, honest, dignified and fair conditions”.

“Clearly, with this Russian president, it is impossible. He does not know what dignity and honesty are. Therefore, we are ready for a dialogue with Russia, but with another president of Russia,” Zelenskyy said.

On Thursday, UN chief Antonio Guterres told reporters that “any decision to proceed with the annexation of Donetsk, Luhansk, Kherson and Zaporizhia regions of Ukraine would have no legal value and deserves to be condemned”.

He called the annexation a “dangerous escalation”.

Moscow has already taken a series of steps in what observers call efforts to “Russify” the annexed regions, a process that is most advanced in the occupied parts of Donetsk and Luhansk, where it has handed out hundreds of thousands of Russian passports to residents since 2019 and almost completely replaced Ukraine’s hryvnia currency with the Russian rouble.

In the occupied areas of all four regions, access to Ukrainian TV and mobile phone networks has been cut and only Russian channels and telecoms providers are available.

Schools previously teaching the Ukrainian curriculum are being forced to adopt a new Russian one.
Meanwhile, the pro-Russian separatist regions in Donetsk and Luhansk have their own flags, which will soon be replaced by Russia’s, while billboards on streets in Kherson and Zaporizhia hail their future as part of Russia.

In the speech, Putin urged Ukraine to cease military action and return to the negotiating table.

The Ukrainian government has pledged to recapture all the lands seized by Russia and said Moscow’s decision to annex the territories had destroyed any prospect of talks.

Putin further decried the West’s backing of Ukraine in the conflict as an attempt to turn Russia into a “colony” and “crowds of slaves”.

“After the collapse of the USSR, the West decided that the world would forever have to put up with its dictates,” Putin said on Friday, referring to the Soviet Union.

“The West expected that Russia would not be able to cope with such dictates and fall apart … but Russia has been reborn and strengthened.”

Still, Patrick Bury, a senior lecturer in security at the University of Bath in the UK, noted the speech – which seemed “more aimed at the global audience” – did not contain any specific ultimatum to Ukraine in terms of the region, nor did it contain any “mention of nuclear escalation”.

The omissions allay some concerns of a more immediate threat from Russia, he told Al Jazeera.

“So the security implications now are: what does Ukraine do with these oblasts, do they continue attacking, and I imagine they will, in the short term?” he said. “And how does Russia respond?”

Sajith reveals what Pohottuwa and the Rajapaksas plotted ! (Video/Photos)