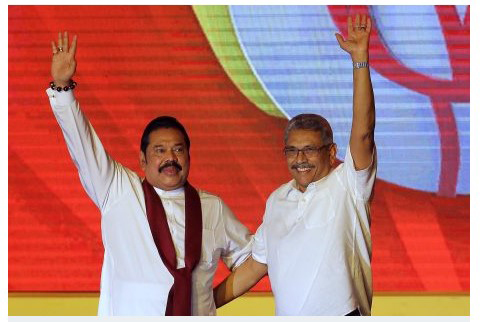 For far too long, Sri Lanka has been a stage with the Rajapaksas as the only meaningful actors. A democratic renewal may be all that can save the country in the long run.

Sri Lanka is in crisis: a battered economy, sovereign default, food and fuel shortages, and now renewed international pressure on how Colombo mismanaged the political settlement of the ethnic conflict with the Tamils.

Indeed, ahead of the ongoing session of the United Nations Human Rights Council (UNHRC), the organization released a report that went as far as to claim that Sri Lanka’s economic travails are in part a consequence of the “embedded impunity for past and present human rights abuses, economic crimes, and corruption.” The U.N. report has received moderate validation from some of Sri Lanka’s most significant potential allies, including India, which has voiced concerns over the lack of “measurable progress” with respect to addressing the ethnic problem.

Drawing a direct correlation between such “impunity” and the current economic crisis may admittedly be a bit of a stretch. However, what the report somewhat accidentally sheds light on is the political consequences of winning a civil war, particularly with respect to the level of adulation and freedom afforded to the perceived “heroes” of such a struggle – in this case, the country’s prominent Rajapaksa family.

The protracted war against certain Tamil groups, most prominently the Liberation Tigers of Tamil Eelam (LTTE), was one of the most significant challenges Sri Lanka has had to endure since its independence. It had been expected that following the declaration of victory against the LTTE in 2009, the country would return to being a leading figure in the Global South with respect to its advocacy of free-market liberalization.
During the 1970s, Sri Lanka started attracting foreign investors in droves, primarily due to its willingness to buck the trend in much of the developing world and initiate liberalized trade reforms.

The announcement of economic reform policies and tax benefits in 1977 paved the way for foreign direct investment (FDI) to flow into the country, which spent significantly over the next decade in improving basic infrastructure and manufacturing capabilities for export-oriented products. However, before such policies could truly start bearing fruit, a succession of internal armed conflicts from 1983 onward led to foreign investors fleeing Sri Lanka, with some – like the American giants Motorola and Harris Corporation – having never returned to the island state.

While Sri Lanka initiated a second wave of trade reforms in the late 1980s and early 1990s, it would not be a stretch to suggest that the state never truly recovered the sheen of its brief economic success in the late 1970s. With successive governments embroiled in tackling the civil war, Sri Lanka’s economy devolved into an export hub for certain natural resources such as rubber and coconuts, and low-level value-added products such as Ceylon Tea. There was also a growing demand in the textile sector, which quickly emerged as one of the largest sources of foreign exchange for the Sri Lankan economy. Since the end of the civil war, tourism has also picked up as a major source of revenue for the state, while the global fixation on the Blue Economy also augured well for the island nation and its 22 million-strong population.

It is to be expected that a state would suffer in terms of setting up a strong, resilient economy while it is engaged in fighting a credible security threat within its borders. While economic and military aid flows into Sri Lanka helped keep it afloat for much of this period, the onus on any state in a post-war recovery stage is to address any structural shortcomings that may have become entrenched during the long years spent focusing primarily on security and territorial integrity. However, since the second wave of trade policies petered out by the end of the 1990s, much of the economic measures initiated in the last two decades have been rather piecemeal and reeked of short-termism. The lack of adequate reforms has resulted in the definite mishandling of Sri Lanka’s economy.

The Destiny of a Dynasty

For over 20 years, the Rajapaksa family dynasty has controlled Sri Lankan politics. They have been accused of nepotism, corruption, and poor administration. Mahinda Rajapaksa served two terms as president of Sri Lanka, from 2005 to 2015, while his brother Gotabaya was elected president in 2019. While Mahinda had been active in political circles since the 1970s, Gotabaya retired from the Sri Lankan Army as a lieutenant colonel in 1991, having seen action during the First Eelam War. When Mahinda entered office as president in 2005, he named his brother secretary to the Ministry of Defense and Urban Development, a post he held until 2015.

With the defense portfolio under Mahinda and with his brother serving as the secretary, the Rajapaksa brothers held sway over Sri Lanka’s National Security Council during this period and were effectively credited with bringing an end to the decades-long armed conflict with the Tamil groups. It would not be remiss to state that apart from belts in northern and eastern Sri Lanka, the Rajapaksa brothers were seen as the heroes who brought the LTTE to heel, even if this required brutal strength to achieve. Mahinda’s re-election in 2010 with nearly 58 percent of the popular vote, a year after the end of the war, is testament to this notion.

During his years in power, Mahinda was criticized for placing dozens of relatives – including Gotabaya – in government positions. Upon becoming president in 2019, Gotabaya effectively returned the favor, appointing Mahinda as prime minister. Furthermore, Gotabaya also continued the trend of delegating important positions to his wider family.

Dynastic politics is nothing new in South Asia, let alone Sri Lanka. Still, it can be argued that the Rajapaksas have managed to take this to a whole new level, all the while winning elections (except for Mahinda’s second re-election campaign of 2015) with the utmost ease. If they enjoyed public support for so long, then where did things go wrong? Arguably, it is exactly the sort of unprecedented public approval that the Rajapaksas once enjoyed that has landed the country in such trouble.

As a nation, Sri Lanka has lurched from crisis to crisis during the years of the Rajapaksa dynasty. For Mahinda, on assuming power in 2005, just as important as ending the civil war was the reconstruction efforts in the wake of the 2004 Indian Ocean tsunami. For Gotabaya, one of the main catalysts for his appointment as president in November 2019 was the Easter Sunday terrorist attacks earlier that year. Then, immediately after he entered office, Sri Lanka (and the world) was rocked by the COVID-19 pandemic.

In the intervening years, the Rajapaksas, particularly Mahinda, cultivated an image of flamboyant leaders, able to negotiate from a position of strength and keep both China and India on their toes. Cognizant of China’s expanding interests in the Indian Ocean and the potential threat India foresaw from this, Sri Lanka enjoyed a period where bigger powers were falling over themselves to gain favor in Colombo. Major infrastructure projects were signed off on, with Sri Lanka borrowing from all manner of lenders – from sovereign states to private creditors – to finance ambitious ventures like the Hambantota port, Colombo Port City, Lotus Tower, and Mattala International Airport, to name but a few.

All the while both Mahinda and Gotabaya ensured that key posts related to such projects were held by those close to them. This is perhaps what the UNHRC report alleging “economic crimes and corruption” is most specifically referring to. Some of the Rajapaksa brothers’ extended family who held key posts during 2005-2015 and 2019-2022 are listed below (the periods of service are provided where available):

All said, the Rajapaksa brothers are said to have placed more than 40 relatives in influential positions during their respective tenures as president. They got away with it largely because of the instrumental role the two brothers were seen to have played in ending the 26-year long civil war. The Rajapaksas ensured that the key finance portfolio was kept within the family, with Mahinda in charge during 2005-2015 and again from November 2019 to July 2021 under Gotabaya’s presidency, before being replaced as minister by their brother Basil (who remained in the post until April of this year).

Similarly, plum posts in the ministries of Economic Development, Ports and Highways, and Irrigation and Water Management, as well as in major state-run firms like Sri Lankan Airlines, Sri Lanka Telecom, Sri Lanka Ports Authority, and Airport and Aviation Service Limited, always had a Rajapaksa at or near the helm. Even key foreign postings such as the ambassadorships to the United States and Russia were utilized to satiate the wider family’s ambitions and ensure the growth of the dynasty.

Alongside the ill-advised moves by the Gotabaya presidency to slash taxes at a record rate and to implement overnight a practice of organic farming by banning imports of chemical fertilizers, one of the major root causes of Sri Lanka’s current peril has to be the widespread nepotism of the Rajapaksa family. With each new ambitious proposal that was made and with each new ministry or state-run organization helmed by a near-relative, the sovereign debt of Sri Lanka has increased, while the Rajapaksa family coffers kept overflowing. Reports in 2015 suggested that during the two terms of Mahinda’s presidency, over $18 billion was siphoned off by the family. Indeed, the Rajapaksas are by some estimates responsible for over 78 percent of Sri Lanka’s current debt.

Whether or not international creditors agree to restructure Sri Lanka’s debt, and whether or not the International Monetary Fund (IMF) follows through on the preliminary agreement to provide a $2.9 billion loan to the state, nothing will change on the ground until the Sri Lankan political landscape takes a turn for the better. The warm welcome that Gotabaya received from political aides on his return to Sri Lanka (having fled seven weeks before in the face of citizen protests) does not leave much room for optimism. It is not loans, aid, or debt restructuring that the island-nation needs the most. A return to grassroots democracy with the coming through of a new crop of leaders is the need of the hour in Sri Lanka.

To that extent, the call by India at the UNHRC for tangible progress toward the implementation of provincial elections as per the 13th amendment to the Sri Lankan Constitution is a step in the right direction. For far too long all of Sri Lanka has been a stage with the Rajapaksas as the only meaningful actors.

The article expresses the authors’ views alone and does not reflect the opinions and beliefs of any institution to which they belong.