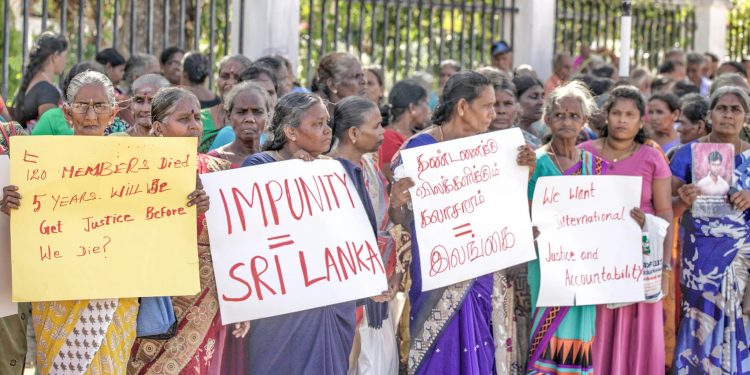 Hundreds of Tamil mothers marched in Kilinochchi District last Friday (12) to commemorate 2,000 days of protests and activism to seek justice for their sons, who they claim were forcibly disappeared during and after the civil war.

Protests began in February 2017 during the Yahapalana government, which promised families of the disappeared justice. They demanded information about the whereabouts of their loved ones.

“We urge Gotabaya Rajapaksa to be arrested,” Mariya Suresh Ishwaree told the media. After his arrest, we would receive justice. Nobody has provided us with justice. The Sinhala community has also joined us in our fight. We’re on the lookout for our husbands. I’ve been to Geneva twice to seek justice. Many of the mothers of these missing children, particularly those who rely on a daily wage job, are facing enormous hardships while fighting for justice. Because of the current situation, some of them eat only one or two meals per day rather than three.

Sandya Eknaligoda, a human rights activist and the wife of missing journalist Prageeth Eknaligoda, who attended the rally, told  “These mothers waited for justice for 2,000 days. They persisted in their struggle for many years. The new President of Sri Lanka used these mothers during the 2015 election, so he now has the opportunity to give these mothers justice and the truth. I’m attending this event on behalf of the mothers of the South.

Fr. Selvan from Jaffna, who was also an active member of the campaign, told : “We lost thousands, and we need justice.” It is our responsibility to ensure solidarity. All of these people have interesting stories to tell. Former President Maithreepala Sirisena told Tamil families of the disappeared, “There is no one here; if you want, you can visit all the prisons,” but no one knows what happened. We are in a post-conflict situation, and we require justice.”

The years since Sri Lanka’s armed conflict ended in 2009 have not brought comfort to the families of the over 16,000 people who, according to the International Committee of the Red Cross (ICRC), remain missing.

Protests by Sri Lankans in Germany : Against the arrest of activists! Petition to EU Parliament ! Request a General Elections!

Aamir Khan responds to boycott Laal Singh Chaddha trend: ‘If people don’t want to see my film, I would…