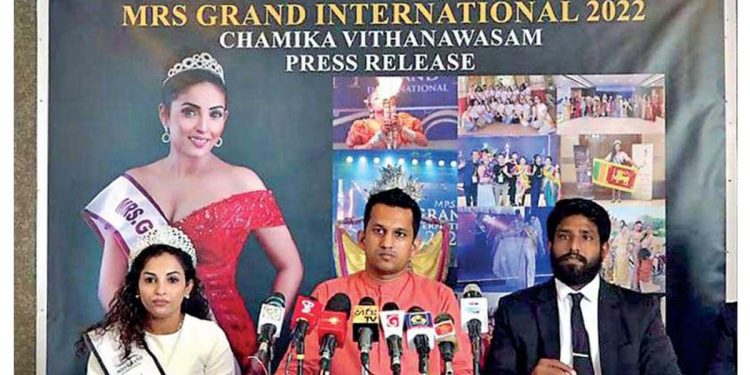 Mrs. Rasangi Chamika, who won the title of Miss Sri Lanka, said yesterday (21) that the director representing Sri Lanka asked for a sexual bribe from her who participated in the “Mrs Grand International -2022” competition held recently in Myanmar.

She said this while attending a press conference held at the Sambuddhatva Jayanti Mandir yesterday (21).

She said that the director representing Sri Lanka of Mrs grand international asked her for a sexual bribe and invited her over the phone to come and stay for the night to smoke a joint, which is a banned drug in Sri Lanka, or as he called it, a joint.

She also stated that according to the notification that she was coming with a friend, he cut off the facilities and brought Sri Lanka into disrepute in the contest held in Myanmar.

In relation to that, she also released the audio tape to the journalists and said that she has many such audio tapes. She also told about the suffering she went through from the airport to return to the country after joining the competition in Myanmar.

She said that the organizers informed her that she would not be able to participate in the final due to the non-payment of the money related to the competition and that her husband in America sent dollars according to the Central Bank’s notification that it was not allowed to send money to relatives in this country. But at that time, she said that she had been directed to the last row by the organizers of the competition and said that she was not seen on the stage because there was a taller Indian woman in front of her.

Here, her lawyer Mr. Sandaruwan Senanayake said that legal action will be taken regarding the demand of sexual bribe from his client and defamation of Sri Lanka before the international community.

Emphasizing that Sri Lanka was in trouble in front of 25 countries, the lawyer said that today (22) an interdict will be filed against the Sri Lankan director of Mrs Grand International for the dishonor caused to the country and his client and an injunction will be taken for his future programs.