Nuwan Bopage, the suspect in the illegal entry into the Fort President’s House, is free on bail of 500,000 rupees. 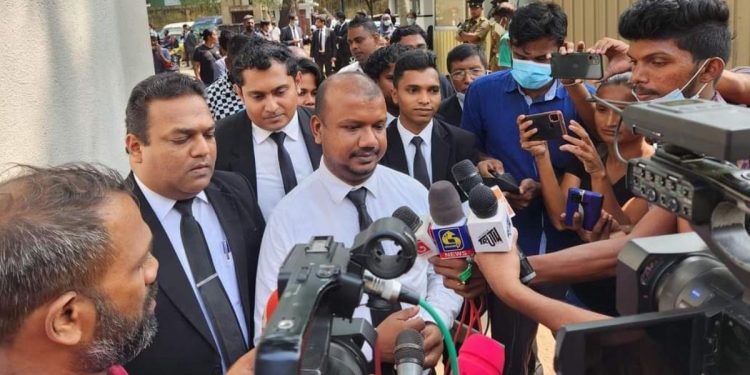 Colombo Fort Magistrate Thilina Gamage today (17) ordered the release of lawyer Mr. Nuwan Bopage, who was named as the 59th suspect in the incident of illegal entry into the Fort President’s House on July 09, when the struggle took place, on a bail of five hundred thousand rupees.

The Magistrate, who granted bail to the lawyer who surrendered to the court through lawyers, also ordered him to go to the Central Crime Division in Colombo at 10.00 am on the 19th and give a statement.

When the case was called, the President’s lawyer Saliya Peiris, who represented the court on his behalf, expressed his objection to the police’s request to issue a travel ban to the suspect lawyer, Mr. Nuwan Bopage.

The magistrate stated that he surrendered to the court after he was named as a suspect and the police did not arrest the suspect.

Also, the Magistrate refused the request of the prosecution who stated that he should not ask for orders that would make people uncomfortable and that he would give the necessary orders if the suspect avoids the court.

The most special event witnessed was the appearance of more than 50 lawyers, including the President of the Bar Association Mr. Saliya Peiris, on behalf of Bopage.

Anyone joining the government now, wants a bargain. Withanage (VIDEO)