Mother rejected us, and the crocodile devoured our father, so now we have no one… 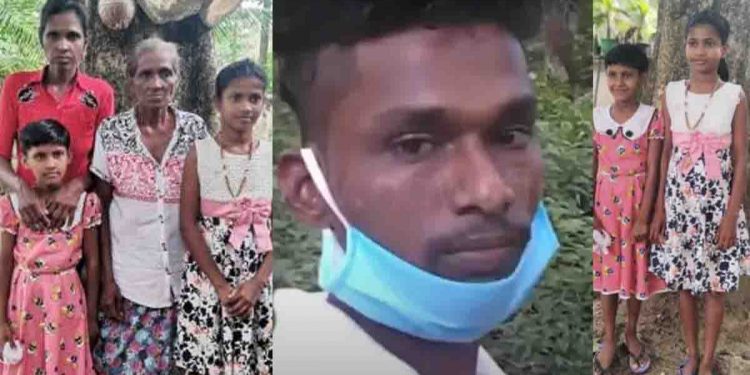 Every day we hear and see heart-wrenching events through the media. When some mothers leave the country, they forget the children they gave birth to. Recently, we heard from the Hulandawa Village Officer of Akurassa Divisional Secretariat that two little daughters of such a mother when they want to enjoy life, but instead they have to face suffering. On the 28th, the news that the father of these children was grabbed by a crocodile caused a stir on social media. Our ‘Mawrata’ newspaper investigated this, and we contacted the Disaster Relief Service Officer of Akurassa Divisional Secretariat, U.G. Mr. Sampath .

Palanisam Arumugam (37) was the father of the victim of the crocodile in Nilwala river. Arumugam Dinithi Madhuwanti and Arumugam Imesha Rani are his two daughters. The father of these children was killed by a crocodile near Nilwala River on the 28th at around 5.30 pm. Villagers who witnessed the incident said that they saw the crocodile swimming in the Nilwala river with the its hunt. It was reported that the local residents tried to save them but failed. The villagers mentioned that crocodiles often hang out in that area in the morning and that the crocodiles are about 12-15 feet long.

In many families, fathers take on the burden of mothers. The innocent father of these children were taken away by the crocodile. When living, this father nurtured the children. No matter how much poverty there was, the children lived with difficulty. Mother’s absence was not felt. That is why it was difficult for the children to bear the death of their father. It was learned that they are now mentally disturbed. It was also reported that with the aim of securing the future for these children, a special program has been started through the ‘Surakimu Akurasi Mal Kekulu’ organization operated by the Akurassa Divisional Secretariat.

The body parts of the father who grabbed by the crocodile were found by the police in the Nilwala river. After the examination by the forensic officer, the body was handed over to the relatives, and the last rites were performed at the Hulandawa Public Cemetery recently. A large number of people including the villagers were present at that.

These little daughters commented on the death of their father.

Our mother also left us. only me, my grandmother and my sister are there. My mother said no to all of us. Father went to the river asking me to stay . My sister and I played at home. After a while, I heard that my father was nowhere to be seen in the river. I haven’t seen my father…’

The grandmother of the daughters said this idea.

The children are sent to school alternately. Mugunuwanna is cooked and feed them wiht that …’
Indeed, these people are very helpless. Oppressed by poverty. These children have lost their parents’ love and affection. I couldn’t imagine of their tomorrow. Both parents are absent. School life is at a standstill. When these children run out of food, they ask for some food from the houses in the neighborhood.

At the time of the burial of the daughter’s father Mr. Palanisam Arumugam, a villager said this with tears in his eyes.

He finally requested that if you have respect for this deceased person, do something good for his children. For these children, Akurassa Divisional Secretary Mrs. K.G.D. Anoja helps, thank you very much for the help provided Mrs. Anoja. There are many such helpless children in our country. Our country will be more beautiful if every regional secretariat is equally committed to helping such children.

Akurassa Divisional Secretary Mrs. K.G.D. Anoja said that they will take steps to ensure the safety of the two girls and will entrust the legal custody of the girls to their aunt. She said that many people have promised to help these children. The Divisional Secretary said that for this, the Father of Hulandawa Church in Akurassa, OIC of the Police Station , Probation Officers, Zonal Education Director and other government officials are working together.

Although the mother of these children left the children, the father gave them affection. They cannot bear to loss of that love. The father was the hero the protector of the children. No one will be able to fill that gap. It was the father who filled the lack of mother. Children were sent to school amidst many scarcities, with the earnings of a daily wage labor. He worked as much as he could to provide to his children. Earned to feed his children. But today that father is not there. The children may see their father in dreams.

We at ‘Mavrata’ newspaper are inviting philanthropists who can help these children to enjoy a beautiful tomorrow. If anyone wants to donate school equipment, clothes, etc. to them, contact Mrs.K.G.D. Anoja, Divisional Secretary, Divisional Secretary’s Office, Akuressa, deliver the said materials.
If you want to get more information about these daughters, you can contact the following officers and get that information.

You were not alone when the little girl’s mother left . We are all here for you. These aunts and uncles are planning to do a lot for your tomorrow. We ask the same from all of you . Thank you very much, everyone. Our only hope is that you will contribute to our country tomorrow as good citizens…

Mahinda accompanied the MPs and met the Chinese ambassador! (PHOTOS)