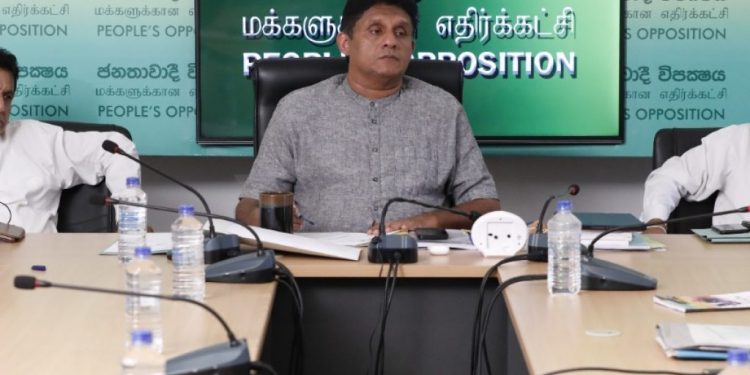 Sajith Premadasa recently met with 12 national groups at his office.

Sajith said that racism cannot be used to build a country.

The opposition leader and Samagi Jana Balawega believe there are no minorities in the country, only other nationalities.

Mr Sajith Premadasa responding to a participant in the crowd, said, “I don’t have the word minority in my vocabulary.” I always tell other nationals, one may be able to enact many rules and regulations, but these thoughts have to come from the bottom of one’s heart. This is our country. Do we really need to break this country into different pieces? We are not second class, third class, or first class citizens. I am not arguing with you.

Didn’t we adopt this system in the cremation and burial issues? He asked, “What is this sterile kottu, surgery, aren’t all these insane thoughts brought to light. Incidents related to Dr Shafi all those insane and stupid rhetoric. The end of this is that Muslims got into an angry mantle state with killer instincts. is it good for the country’s security, Therefor what I believe is within a unitary state maximum division of power,’ I thoroughly believe in ‘Grama Rajya ‘ concept

He further noted ’empowerment’ should begin from minor remote village areas going beyond the GS Divisions.

In response to the question raised about empowering the 13th amendment which is the hidden aspect in the concept describe by Mr Premadas he replied that 13 is already there. we will carry forward it as it is there today. Unlike Pohottuwa and Mr. Mahinda Rajapaksa governments we will never say it as 13 minus or 13 plus.

Some people posted fake news about the meeting online.