Inside story of ‘450 core’ of Ratta and Dylan Konara 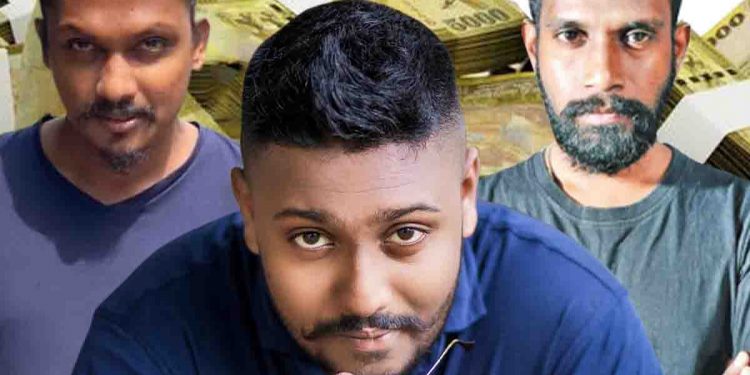 ⦁ ‘The struggle is an NGO. Crores of money reach from abroad

⦁ Money come from abroad for the struggle. Our children are suffering and the ‘big guys’ are making crores of money’

This is the general headline of a situation that has been discussed in many parts of the country for the past few days.

The news presented here is that three young men namely Ratta, Konara and Dilan, who are leading the Galle face struggle. The three have received a large sum of money from abroad. This story, which is a fiction which defeats the Arabian nights in to a second place is depicted in the following manner.

Ratta, Konara and Dilan have recently opened three accounts at Bank of Ceylon’s (BOC) Union Place branch. Shortly thereafter, the three accounts received significantly large amounts from abroad. After receiving the money, Ratta, Konara and Dilan, go to the (BOC) branch. They travelled in Toyota Prius motor car. (The writer learned after this incident that the BOC cares so much about the vehicles of its customers).

The three men withdraw the entire amount without saving a penny. The bank manager asked the three what was the reason for receiving such a lot of money. The three youngsters got offended at that inquiry and had said that they were ‘Galle face activists’ and that if the bank keep asking questions, they would raid the bank the next day and had left.

But because this news was pushed by some influential person. It gets space in a newspaper page after three days. Since it was in a newspaper, TV channels read this news making it much interesting in the newspaper headlines time slots. Galle face activists are a set of dollar-mining NGO. The purpose of this is to socialize that Galle face protesters are set greedy dollar mongers.

Responding to this news in a video, Rathindu Senaratne aka Ratta says that the Ranil Wickremesinghe government should seek the help of more talented people in writing screenplays. He also asks that the basic demand of the struggle is the audit, and therefore the audit should start from him. He also claims that a case will be filed against the media that published this false news.

It is no secret that the government is approaching to solve the protest with a new approach.450 lakh news is just one of them. Grabbing guns from soldiers is another such case. The general public also has doubts about the burning of houses on May 9th . And recent, disputes and conflicts arose in the areas of struggle are also on the rise.

Arrangements have been made to provide immediate media coverage to those. An example of this is the publicity given by the media to the news that a woman who came to watch the protest running away with her paramour. This is not the first time a Sri Lankan woman has run away with an illicit lover. Blaming the struggle for this taken as cover to challenge its legitimacy of the protest.

Attempts to suppress the protest

It is not difficult to understand why the government is indulged in such activities. Also, the number of people engaged in notorious activities but using the name of struggle is increasing. Breaking into media houses is one such example. All this is happening in this way because the government has decided to vacate the Gale face struggle site because the protest cannot be stopped.

Activists must show their intelligence now. Their only aim should be to continue their struggle without interfering in any illegal activities. Because the nephew who has memorized uncle’s law book knows very well. He not only knows where he can sneak in but also the traps that he can set .The purpose of creating such mud slinging operations is to discourage the participation of the Galle face activists. Also to dilute the positive attitudes the society has about the said struggle.

This does not imply that the current rulers have abandoned the traditional method of resolving the conflict with armed intervention. At the time of writing this article, such an intervention is made to remove the Galle face activists from the premises of the President’s Secretariat. Even the Bar Association had earlier requested the activists to hand over the state property and leave because they saw impending risk of an attack.

In fact, the purpose of this kind of false propaganda is to tarnish the good name that the activists have established and to destroy the blessing they receive from the society. Apart from that, the aim of launching such campaigns is to create conflicts among the protesters. The current president, Ranil, is a man with a strange political ‘theory’.

It is a simple for him to penetrate into any system, change its direction, send it astray and destroy it completely. During the war in the north, Karuna and Pillaiyan split the LTTE organization. This was separated it by Ranil. Prabhakaran’s road towards defeat began from that day.

A struggler who recently created a video for social media says that Ranil divided the struggle. He says in that video that ‘for Ranil, who divided the LTTE, dividing the struggle is a trivial task’. That story is absolutely true. Ranil Wickremesinghe is not a general who fires missiles to sink a ship. What he does is steal the tiny compass of the ship putting in his pocket. He always knows that the ship will go astray and crash into the rocks and cause self-destruct.

Asia Cup moved out of Sri Lanka to UAE