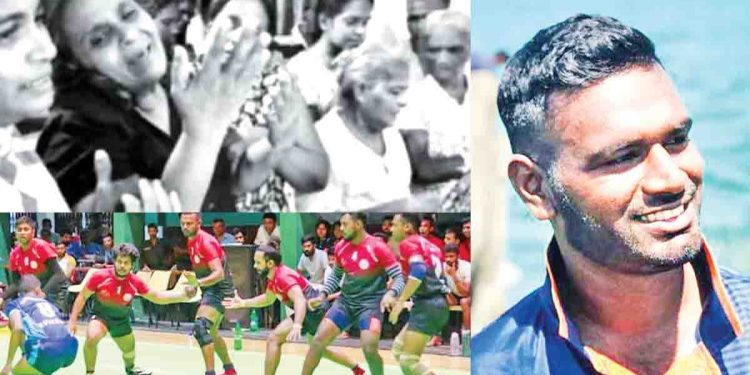 We are losing the precious lives of young people who are going to be the future of our country day by day in a very unfortunate manner. The loss of these young lives is increasing day by day due to mental stress, various mental disorders, etc. Another such incident was heard from Sabaragamuwa University on the 21st. On the 21st, the media spread the news that Lasantha Harsha Dhananjaya, a fourth-year student in the applied studies department of the same university and a resident of Paragasthota Palpola, Kalutara, died mysteriously in his bed. The police investigating the matter say that the cause of Harsha’s death has not been revealed yet. It has not yet been revealed whether this was a murder or a suicide.

This 25-year-old young man excelled in both education and sports since childhood. His hope was to excel in education and sports and serve the country. But it took a few moments for all those expectations to disappear.
Harsha was the only male child in the family as well as the eldest child in the family. He studied at Bandaragama National School and was the captain of the kabaddi team there.

Harsha had left the hostel a few days ago, telling his friends that he was going to seek treatment for an illness. But he had gone home. On the 20th, Harsha returned to his hostel on a motorcycle. That was the day before he died. After his arrival, he made a phone call to his mother and said that he had arrived at the university hostel. But neither he nor the mother knew that it was the last call he gave to his mother. Harsha had also managed to talk to his sister on the phone about some error that was on the computer at home until midnight that day.

The hostel mates were suspicious about Harsha not waking up till late the next morning. When there was no response from Harsha even when they spoke to him, the friends shake Harsha’s body. But when there was no response from Harsha, the friends had realized that Harsha was dead. They could not believe how their friend who slept with them the night before died like this. With the help of other friends of the hostel, they arranged to take Harsha to Pambahinna Regional Hospital as soon as possible. The doctors who examined him said that Harsha had passed away.

A friend of the Harsha in the Sinharaja hostel where Harsha was staying. .U.K.Dinuka Dilshan testified to the police and stated as follows.

‘This is my friend Harshai who is dead. Harsha came to the hostel back from home and had dinner with us. We all went to sleep together. The next day we got up but Harsha didn’t get up. Harsha did not get up even though we shook him and spoke several times. We told others on campus about it. As Harsha was not getting up, he was taken to the Pambahinna hospital. But the doctor said that Harsha has left this world…’

Then the friends informed the Samanalawewa Police about this incident and Sabaragamuwa University took steps to inform Harsha’s parents about it.

Samanalewwa Police Station OIC Chinthaka Wijesinghe and Deputy Police Inspector Gamage, Balangoda Magistrate B.K.V. Heshani Rodrigu arrived at the scene of the death and conducted investigations. Initial investigations showed that nothing suspicious was found in or around the hostel and that Harsha did not have a girlfriend inside or outside of the university.

Also, there were no external injuries or scratches on his body. Although the Magistrate’s inquest was conducted on the evening of the 21st, the exact cause of death has not been revealed yet. The forensic medical officer of Balangoda Base Hospital who conducted the post-mortem examination, L. K. C.K. Ariyaratne, gave an open verdict on the death and took steps to forward Harsha’s body parts to the government coroner.

Harsha had almost two months left to complete his university degree. But he left this world before achieving that dream. The group photo of the students appearing for graduation was scheduled to be taken on the 23rd. But Harsha’s last rites were done on the 23rd.

This unexpected departure of Harsha was an indescribable painful experience for his beloved parents as well as for his university friends.

On the 22nd, Harsha’s body was brought to his home in Palpola on the shoulders of friends who studied together with him for almost four years. Harsha’s mother spoke about the sudden death of her beloved son with unbearable grief.
Please speak to me, my son. Speak. Have you left us, dear? Oh, my golden son is smiling and looking at me. ‘ Many people who saw Harsha’s mother crying like this could not hide their tears.

Harsha’s father could not bear the separation of his son and expressed the pain of his heart like this.
‘My son is a child without any illness… how could such a child suddenly disappear…? Doctors should discuss these and find out what it is… Now my child is gone. No mother or father should suffer like this. Today, too many young children die prematurely. The doctors are repeatedly requested to pay close attention to this matter….’

Kabaddi Sangam members of Sabaragamuwa University had expressed their grief about Harsha’s separation by leaving a note like this.

Is this a dream?
We see at the same time…
Dear Friend you left us alone
Did you travel to heaven?
A long way to pass
There must have been…
Many dreams
The mind must have been tied up
Your smile, your voice
Your image is still in our hearts…
By fate
Behind the birth
A shadow
the death…’
Despite the torrential rain, a large number of people came to pay their last respects to Harsha. Last Sunday (23) his last rites were performed at Palpola Public Cemetery.

Harsha’s loving parents will bear the sorrow of his separation for the rest of their lives.
How can those parents revive their minds? No one can afford to lose a young life in vain. Only living loved ones feel that loss.

Parents should pay more attention to students who are in higher education. I feel that children are moving away from home and away from their parents to get university education. There is no one to tell them the loneliness, stress and sadness they feel in hostel life. No one is there to find out whether he ate or drank. On the other hand, Ragging is severely practiced in universities. These things bring a lot of stress to the children. We request all parents to pay more attention to their children in this situation. Remember that they need love and kindness more than just being around.

Medical tests are revealing day by day that heart attacks can occur even during sleep. In such cases, it is possible to die in one’s sleep without being able to scream with the pain.

Today, many children are suffering from diseases due to the fact that they eat poisonous food. At present, there are allegations that the food in the university hostels is not of proper standard. The government should focus on this. Due to the economic situation in Sri Lanka, children are also suffering from mental stress. Children’s dreams are fading more and more. Parents send their children to universities with a thousand hopes. But how do you cope when those dreams fade like this? This is not the first student we have lost while studying in the university. You may also remember that many such children passed away in the last few months.

Harsha, unexpectedly, you have gone without coming back. We pray from the bottom of our hearts that you will not suffer such an untimely death in the future.

Heavy rains for most parts of the country