Everyone will be surprised if they read about Arooran, who has been imprisoned under the PTA for 13 years without any charge… Oh, is this Sri Lanka? 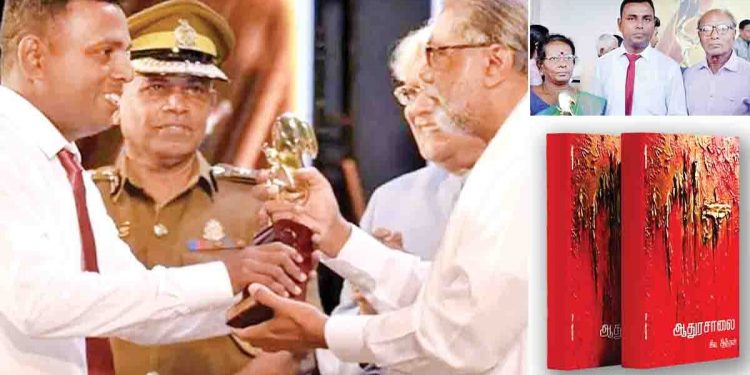 Sivalingam Arooran, who is imprisoned under the Prevention of Terrorism Act (PTA), won the best Tamil novel award at the state literary festival in 2022, serving as a wake-up call to authorities. That is how long the authorities intend to detain all other detainees like him, who are being held without charges and are wasting their valuable lives inside the prison.

The award brought Arooran to the attention of society. But how many people are imprisoned under the Prevention of Terrorism Act while the rest of the world is unaware?

Sivalingam Arooran was awarded the 2022 State Literary Awards, which are presented annually to Sri Lankan literati who have excelled in literature. President Ranil Wickremesinghe presided over an award ceremony at Colombo’s Bandaranaike Memorial International Conference Hall (BMICH) on October 28.

Arooran, 42, is a suspect being held in the New Magazine Jail under the Terrorism Prevention Act.

At the awards ceremony, ‘Adurasalai’ by Sivalingam Arooran was named the Best Original (Tamil) Novel. The novel’s theme is a story about a doctor who transforms an underdeveloped hospital into a developed one.

Sivalingam Arooran graduated with honours from the University of Moratuwa in 2004. He was detained under the Prevention of Terrorism Act on June 25, 2009, while pursuing his post-graduate studies at Peradeniya University.

He is suspected of being involved in the 2006 bomb attack on then-Defense Secretary Gotabhaya Rajapakse at Pittala Junction in Colombo.

Arooran, who was drawn to reading and writing after his imprisonment, has written seven Tamil language works and one English language work. All of those works have been nominated for State Literary Awards, which is noteworthy. He also won the ‘Rajya Sahitya’ Award for best Tamil novel in 2016.

He was led to the award ceremony by Jagath Weerasinghe, the Senior Prison Superintendent of the Magazine Prison, and was presented with the award by Buddha Sasana, Minister of State for Religious and Cultural Affairs, Vidura Wickramanayake.

Sivalingam Arooran’s father was an engineer as well. Before his imprisonment, Arooran did not read novels or short stories, according to his father. He got used to reading books in prison to pass the time.

He had never read a short story or a novel in his life.

Nothing, not even writing. He began reading inside the prison. The government awarded the first novel a literary award. This is the second time…’ Arooran’s father said.

‘I looked at him when he went to jail; there is no way that father, I will come soon,’ he said emotionally. Because they have stated that if they are taken under the PTA, they will not be released.’

Senior Prison Superintendent of Magazine Prison Jagath Weerasinghe stated that talented writers have emerged from the prison during the rehabilitation process. He described Arooran as a disciplined suspect who could read and write fluently.

‘He remains a suspect.’ The case is still being investigated. We are confident that the proceedings will be completed soon because of his discipline…’ said the prison superintendent.

‘If there is evidence, prosecute.’

He expressed his gratitude to the Sri Lanka Prisons Department and the State Literary Awards for their support and appreciation of a talented Sri Lankan.

The professor also emphasises that Sri Lanka should promptly review the cases of all detainees after the investigation stage is completed. He emphasised that terrorism is a serious crime that should be prosecuted if evidence exists.

He also stated that the time has come for Sri Lanka to pass a new anti-terrorism law and integrate the prison system into rehabilitation.

Professor Gunaratne believes that Sivalingam Arooran’s talents can assist the Prisons Department in developing a cutting-edge rehabilitation programme to promote moderation, tolerance, and harmony in prisons.

How many more detainees will there be like Arooran?

‘This award shows that he has been in prison for 13 years,’ says lawyer Bhavani Fonseka. Many of these people have been arrested under the PTA (Prevention of Terrorism Act). That is to say, without filing a lawsuit…’

‘This case clearly shows that the PTA has targeted the Tamil minority,’ she said. Nobody asks any questions. Because of the struggle, there is now some discussion about the PTA. However, the Tamil minority has been targeted for years, dating back to 1979. It’s only on one side. The other possibility is that there are talented people in prison. He is well-known for having won an award. ‘There are others over there…’ Bhavani brought this up.

She noted that the President has previously granted pardons to criminal offenders on numerous occasions.

‘If the president so desires, he may pardon.’ Why have they been arrested and detained for so long without being charged? For the past 13 years, the government has done nothing. A person who has been convicted in a case may also be granted a pardon. From the standpoint of the rule of law, this demonstrates that Sri Lanka has numerous issues….’

‘The PTA is a harsh law.” It’s been 13 years since the war ended. The PTA is still active. Nothing has been accomplished. According to the government, a new law will be introduced next year. It is addressed to the EU. After approaching the international community, Sri Lanka’s problems have not been resolved. There will be many more such issues until that law is passed. So how many more people like Arooran will be arrested and detained by the government for years without even filing a case…’ lawyer Bhawani Fonseka asked.

What does the Minister of Justice say?

Dr. Wijayadasa Rajapaksa, Minister of Justice, Prison Affairs and Constitutional Reforms, said that the detainees held under the Prevention of Terrorism Act are being considered. He also pointed out that 8 inmates were released recently.

Aside from the Easter attack group, which is currently being held under the Terrorism Act, the LTTE detainees are 31 he said.

We worked hard to get a new Act passed to replace the Prevention of Terrorism Act. We are drafting the bill in such a way that the most severe conditions in the Prevention of Terrorism Act are relaxed to some extent, while human rights are broadly protected. It must be stated that we do not undervalue the importance of national security simply because of opposition to this…’ he said.