Drug traffickers set fire to Mrs. Lisi Nona’s house after she spoke out against drugs and cannabis! 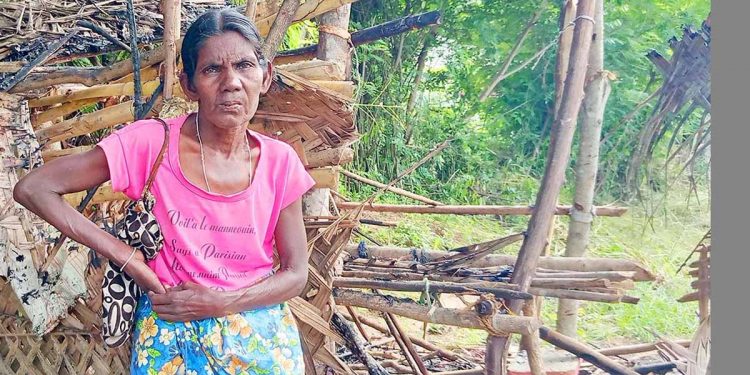 Dimbulagala Dalukana tribal leader K. Lisi nona Today (14) submitted a complaint to the Manampitiya Police that her coconut branch shop was set on fire and destroyed by a group involved in drug trafficking.

Dalukana tribal leader further said that a drug trafficker or a group of people have burnt down their small coconut branch shop early this morning due to their continuous hunger strike against illegal alcohol, drugs, ganja and smuggling in Dalukana village and nearby tribal villages. Lissi nona remarked, weeping.

She said that a complaint was submitted to the Manampitiya police about this, and if the law is not implemented by conducting an immediate investigation and arresting the suspects, she will take strict action together with the Dambana tribal leaders , Lisinona said.

Lisinona, a 58-year-old mother of three, is a woman who raised her voice on seven occasions in adivasi villages, including Dalukana, about the loss of lives of her relatives due to alcoholism, and is an adivasi leader who strongly opposed drug trafficking.

The Adivasi leader cried and said that because of her continuous action against drug trafficking, some person or group came to Dalukana village and destroyed the small coconut trees where she sold mangoes and coconuts for living.

Manampitiya Police Station Commander Inspector Asela Sarath Kumara said that a complaint has been received and a special investigation will be initiated to arrest the suspects and the law will be enforced against them.

While Ranil was reading the budget, the opposition conducted a signature drive! The government is worried!