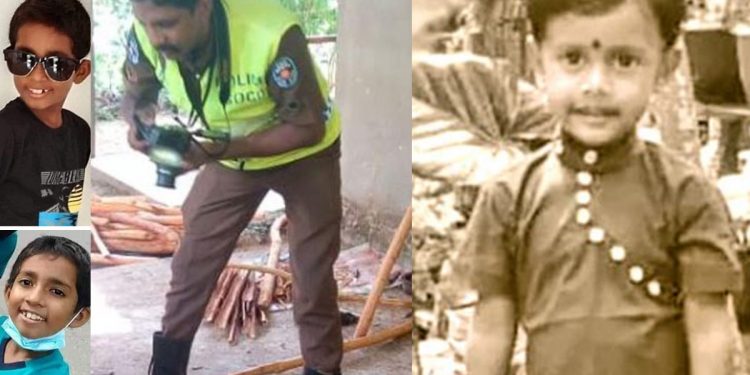 Tragic story of toddlers, infants, and children dying as a result of elders’ irresponsible behaviour.

We heard some heartbreaking news recently about adults who denied a child his rightful place in society. How sad is it that when little children, like flowers, bloom into this world, adults act to end their lives?
Because of the cruelty of the adults, two such little children paid the price with their lives. Another child is on the verge of death as a result of these elders’ misbehaviour.

The first incident occurred in a house in the Kosmodara neighbourhood. A nine-year-old boy was killed in the midst of a dispute between his mother and father. The child died during a knife attack on the mother by the stepfather. That attack severely injured the child’s head and brain. How tragic that it happened while going to save the life of the mother who carried him in her womb for ten months? Why are these people behaving like beasts?
Thus, a nine-year-old boy named Sadev Metsara of Hagoda village, a fifth-grade student at Weliwa Buddhist Maha Vidyalaya, who lived in Waralle, Uwaragala, Boraluhena, Welimaru, paid the ultimate price. What a tragedy that even after the hope of taking the scholarship exam this year was dashed by the stabbing of a loved one?

Prasanna Wickrama, 44, is the stepfather responsible for this murder. He was the Octapad player for the popular band ‘Purple Range.’ In addition, he is known to have worked as a guard at a school in the Deniya region. This person had an argument with his wife on the 27th. When the argument became too heated, the wife’s scooter was also damaged. The wife had had enough of the attacks and was preparing to ride her motorcycle to the police station with her two children. But fate intervened in all of their lives.

Before they left for the police station, Sadev told his mother, ‘If he try to hit my mother, I will stand on the bike.’ Then mother will not be harmed.’ This husband had left the house moments before their departure and had to hide in a tea cultivation near Ilukketiya bridge, which was a halfway point and had cross their path. There was no time for the wife to do anything. The young son did not hesitate to keep his promise to his mother. Nobody was around. On the motorcycle, the husband stabbed his wife. Sadev was stabbed in the head as soon as he attempted to get off the bike. Sadev, who was seriously injured, was rushed to Morawaka Government Hospital.

My husband had a fight with me. He beat me and damaged the seat of my motorcycle. That day, when I was ready to go to the police station, he left the house and hid in a tea plot on the way. The eldest son sat behind. The little son sat in front. While the little son was leaving, he said to me that if father tried to hit mother, I would stand up so that mother would not be hurt. We couldn’t go far. The husband was hiding. Suddenly he jumped forward. The younger son got up when he hit me with the tea gardening knife. The knife that hit me hit my little son. I could not do anything, took my son to Moravaka Hospital. I should have died from that knife attack. But the younger son sacrificed his life for me. How can I live without my son…?’
This nine year old little boy sacrificed his life to save his mother’s life.

Despite receiving treatment in the intensive care unit for several days, this little child died on the 30th, teaching adults a lesson in patience. According to the police, Sadev’s mother had recently married the child’s stepfather, a musician. The suspect was apprehended by Kosmodara Police and is being held in custody until September 9th. They married eight months ago. Both have previously been married, it has been revealed. Sadev is the son of his mother’s second marriage.

Few days before this incident this little child did something which people feel he had premonition about the oncoming dreadful happening. Little Sadev had felt a hint that he was going to leave his life. That is when he found a painting he had drawn in his school bag. Anyone who saw that picture felt sad and pain in their hearts. Kumbio bus (ant bus) painting with the words ‘Nirvana Suva Labewa’ written on top of it.

Oh, son Sadev, you said that and left for ever . Anyone who sees this will be heartbroken. My son gave a message to all parents and left this world for ever…

What Sadev’s best friend said was published on social media as follows.

‘The teacher said you will not come back to school. I thought it was a lie because you didn’t tell me that. You are not well, let’s go to see him in the evening, the teacher touched my head and said. I saw tears in the teacher’s eyes even at that time. Because you are sick, we friends planned to take you some fruits. The teacher said that they are not needed. When the teacher went to your house, she hugged me and cried. We din’t know you are sleeping like this till we came inside the house. I can’t go when you’re like this…’

Another similar incident was reported from a cinnamon stand in Yakkalamulla Magedara area. A four-year-old child named Anut Satsara and a thirty-year-old man died in a shooting that took place there. He was admitted to the Karapitiya Hospital in a critical condition due to the bullet that hit the four-year-old child and the doctors were unable to save his life.

These killings were related to an incident of killing a person in a bus in Atakotte, Elpitiya on 06 September 2019. A motorcyclist from Uragaha had shot and committed this murder. The police said that the deceased 33-year-old man was a suspect in a murder case. But he was not the only one who had to pay for them. A helpless child who was playing in the ‘Kurundu Wadiya’ where he worked also fell victim to it. The bullet hit the child’s abdomen and he was treated for several days at the Karapitiya Hospital.

The child, who was treated in the intensive care unit, passed away on the 30th.

The child’s grandmother said this about this sad incident.

who killed this infant , tell them to kill us too. It’s useless now anyway. Saline is given to mom and dad. How to bear this sorrow? Now our whole family is gone…’

The child’s grandfather was also present at the time of the shooting, and he stated as follows.

At this time, I was also in Kurunduwadiya. I had the child with me. We din’t know anything. Can’t imagine what happened. Strangers came to us. He had a gun in his hand and said, ‘Here he is’. That’s all I heard. Then the man who crushing cinnamon was shot. When he continued to shoot like that, one of the bullets hit the child as well. As soon as it was hit, blood spurted. I screamed and grabbed the baby. He shouted and I yelled, why are you doing this?’ The two of them left without even looking. What will this child do? But there is nothing wrong done by this poor child. I pray that nothing like this happens to any child. Crimes like this should be eliminated…

‘
While these incidents were happening, another such incident was reported on the 28th from Naimbala area of Thihagoda. Harish Hasanka Deshan, a 15-year-old school student, was shot by the police. The shot hit the child’s head. Karapitiya Hospital Director Dr. S.P.U.M Ranga said that the boy has undergone surgery and his condition is serious.

Deshan was traveling in a three-wheeler with four other children, and the police had said that the vehicle was driven in defiance of the police order, so the police chased the vehicle and fired. The children had left their homes with the intention of finding peacock feathers for the village temple. Harish Hasanka Deshan, who was shot, was a 10th grade student of Naimbala Vidyalaya. Deshan, who was shot, was admitted to Matara Hospital but was transferred to Karapitiya Hospital as he was in critical condition. The relevant sub-inspector who did the shooting was remanded.
One of Deshan’s brothers said this about the incident.

The police had shot the brother in the head. My brother and 4 other people had gone to look for peacock feathers for the temple. my younger brother was admitted to the hospital by the police themself..’

It is the burning sorrow that rises in these hearts that comes out. Innocent children pay compensation and do nothing wrong to society and country. The loved ones of the families of the two dead children live with grieving hearts. The authorities are responsible for these. If everyone acted knowing their responsibility to the country’s society to allow all to live freely on this earth, we would not hear and see such incidents today. It is a pity that innocent lives have to be paid in this manner due to lack of proper law in the country.