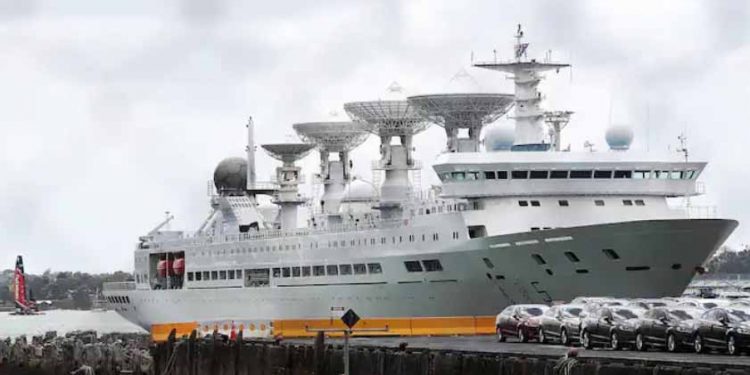 Indian and U.S. officials have asked the bankrupt nation to rebuff China’s request to dock

The Chinese navy ship is reportedly unarmed. It’s probably cruising somewhere in the Indian Ocean. And no one is even sure where it will go.

But for the past week, a 730-foot-long Chinese satellite-tracking vessel has been the source of rising tensions and a symbol of the mounting geopolitical tug-of-war between India and the United States and China over Sri Lanka at a time when the economically devastated island nation is caught between major financial supporters.

Since July, the Yuan Wang 5 has been sailing from China to Hambantota port on the southern tip of Sri Lanka after Sri Lankan officials approved a stop there for “replenishment.” But Indian and U.S. officials have strongly pressured the Sri Lanka government to revoke access to the port, infuriating their Chinese counterparts.

Caught in the middle, Sri Lanka’s Foreign Ministry said in a statement Monday that it formally requested that China postpone the visit while adding that it “wished to reaffirm the enduring friendship and excellent relations between Sri Lanka and China.” Sri Lankan media reported Thursday that the ship had reduced speed and turned around, only to make another U-turn at sea and continue toward the island.

As of Thursday — when the Yuan Wang 5 was originally scheduled to arrive — Sri Lankan officials were still locked in negotiations with the Chinese about whether and when to let the ship dock, said a senior official at the Sri Lankan Foreign Ministry with direct knowledge of the discussions. Indian, Chinese and American officials have all been intensely lobbying behind the scenes, said the Sri Lankan official, who spoke on the condition of anonymity to discuss private talks between governments.

While a Chinese navy ship arriving at Hambantota is not strategically significant, Indian and U.S. officials argue that it would be viewed as Sri Lanka giving special treatment to China, a major creditor, at a time when the embattled government in Colombo needs to renegotiate its debt with a host of international lenders and obtain a  bailout from the International Monetary Fund. As Sri Lanka’s economy entered free fall this year, India, which sees South Asia as its traditional sphere of influence and is seeking to reverse China’s growing role there, extended the island $4 billion in loans to buy emergency fuel.

Then there is the history of the port itself. China, which financed and built it for Sri Lanka in 2012, took control of the facility on a 99-year lease in 2017 after Sri Lanka struggled to repay its debts, spurring accusations from the Trump administration that Beijing engaged in predatory lending with its globe-spanning Belt and Road infrastructure program.

This week, China indirectly accused India of “gross interference” in its affairs and dismissed its complaints that sensors onboard the Yuan Wang 5 could be used to peer inside India.

“It is unreasonable for a third party to put pressure on Sri Lanka on the grounds of so-called security concerns,” Foreign Ministry spokesman Wang Wenbin told reporters in Beijing.

The dispute reflects the jockeying between the United States and its partners and China that is taking place across the world. Since taking office, President Biden has ramped up previous U.S. administrations’ efforts to curtail Chinese expansion into the Indian and Pacific oceans and has rallied countries such as India and Australia to help in that effort. For its part, India has sought American help to counter China, a regional rival with which it has ongoing border disputes.

American analysts say if China were to base military vessels out of Hambantota — which it has not done so far — the People’s Liberation Army would gain a foothold in a highly strategic location close to important shipping lanes and the Persian Gulf. But analysts also say it is awkward for the United States to openly call for denying China access to the port, given that Washington has historically espoused the principle of unrestricted navigation and often irritates China with its naval maneuvers.

In recent years, White said, Washington and New Delhi have strengthened their military cooperation in the Indian Ocean with a view to countering China. On Sunday, a U.S. Navy cargo ship underwent repairs in a shipyard near Chennai, a southern Indian city near Sri Lanka. This marked the first time India allowed U.S. Navy vessels to dock for repairs, something the Pentagon has sought for years.

As the Yuan Wang 5 made its way across the Indian Ocean this week and speculation surrounding the port visit spiked, media in both India and China were awash in chest-thumping commentary.

In India, newspapers blared warnings about the vessel’s surveillance capabilities after the Indian Foreign Ministry issued a stern statement about monitoring any activity that would threaten Indian national security. Cable channels flashed the hashtag “#Chinesespyship” during news programs.

“Take Sri Lanka, for example: Their debt trap has already pushed the country over the edge, but Beijing is not done yet. They’re intent on creating more trouble for the island,” Palki Sharma, anchor of the pro-government WION network, said in a prime-time monologue. “… Whether it’s humanitarian aid, whether it’s IMF bailout talks, only India has stepped up to help Sri Lanka. China has largely played spoilsport.”

The Chinese were similarly shrill, especially after Sri Lanka asked to postpone the port visit.

“India is bullying a bankrupt country,” griped the host of a popular channel on Tencent News. “Just because India gave $4 billion, they think they now call the shots. How does that amount compare to what China has given Sri Lanka over the years?”

Retired Adm. Arun Prakash, a former chief of the Indian navy, said temperatures needed to be lowered. A dispute between India and China benefited neither country — nor Sri Lanka, he said.

“We need to respect Sri Lanka’s autonomy, particularly at this point in time when they’re on their knees,” he said. “It’s a sovereign country that can allow any ship it wants to come in. We don’t have a Monroe Doctrine in the region.”

China ship, yet to dock at Sri – Lanka port