A government and a leader without a mandate! Ranil can no longer remain in power by scaring the people! If we were attacked on the way today, we would not stop at Nugegoda! Anura’s says in Nugegoda! (VIDEO) 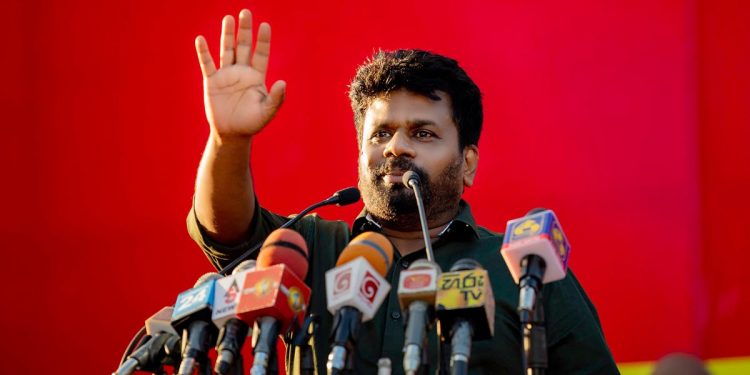 Anura Kumara Dissanayake, the leader of National People’s Force, says a leader without mandate of a government without a mandate Ranil Wickramasinghe cannot retain his position by scaring the country. He said this while addressing the National People’s Force rally under the theme of ‘Power of People’s struggle’, urging the government to dissolve Parliament and allow a new mandate.

“We know that today in our country, a government without a people’s mandate, a leader without a mandate has been built. These are not only the rulers who are not capable of building our country’s economy but also have no plan or vision these people are the group that destroyed our country’s economy. A group committed to corruption and fraud. Therefore, the people of this country have a sacred and just right to come forward to oust that regime. We need to get rid of this.

In the recent past, there was a huge popular uprising that brought inspiration and stimulation to all of us. People’s groups took to the streets in various fields across the country to fight for a people’s rule that would solve their problems for the people. During the last two or three months, we have seen the largest mass mobilization in recent history in Sri Lanka. That struggle succeeded in removing the Rajapaksa camp. But the remaining trunk installed a new head from the Rajapaksa camp, that is the head of Ranil Rajapaksa.

Now next week a lot of ministers are scheduled to take oath. That camp depends on wasting crores of people’s money by offering additional posts. There was only one member of the United National Party in Parliament. All those who ran for the last parliament lost. Now the losers are in the camp. He is offering blessings to himself and those around him. Next, Ranil Wickramasinghe thinks that his existence depends on repression.