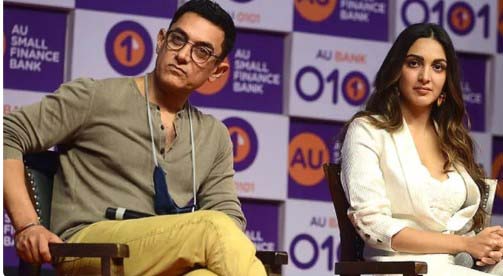 The ad – for a bank – depicts Khan and actor Kiara Advani as newlyweds participating in Hindu wedding rituals.

But critics alleged that the ad attacked Hindu traditions and culture.

The latest ad, for a financial services company, shows Khan’s character taking the ceremonial first step into his bride’s home after marriage – a ritual traditionally performed by Hindu brides.

Some defended the ad’s subversion of gender norms, calling it “brilliant”.

“The ad is about treating our daughters with respect, love and they are no different than a boy,” one Twitter user wrote.

But others said it “mocked” and “insulted” Hindu rituals and traditions.

Mr Mishra, the minister, said he watched the ad after receiving a complaint. “I request him (Khan) to not do such advertisements by keeping the Indian traditions and customs in mind,” he told reporters.

This isn’t the first time Khan has been accused of “hurting” Hindu sentiments.

His last film, Laal Singh Chaddha, faced an online boycott campaign after right-wing trolls and commenters raked up a 2015 comment in which the actor expressed alarm over growing religious intolerance in the country.

At the time, e-commerce platform Snapdeal had dropped Khan as its brand ambassador following a backlash – since then, Khan has often clarified the statement and publicly affirmed that he loves India.

In 2021, the actor faced criticism for featuring in a tyre ad where he asked people to refrain from bursting crackers on the street during the Hindu festival of Diwali.

Mr Mishra meanwhile has frequently made the news for issuing warnings and suggestions to Bollywood.

Earlier this month, the minister said he may take legal action against the makers of the upcoming mythological film Adipurush if they did not remove scenes that showed Hindu deity Hanuman wearing “leather clothes”.

The ad featuring Khan is the latest to face online backlash from right-wing Hindus.

In 2021, actor Alia Bhatt faced criticism for featuring in an ad that questioned the practice of kanyadaan (giving away the bride) at Hindu weddings. A year before that, jewellery brand Tanishq pulled an advertisement featuring an interfaith couple after backlash online.

When Rekha confronted Amitabh Bachchan about his decision to not work with her, was told: ‘I’m not going to…’