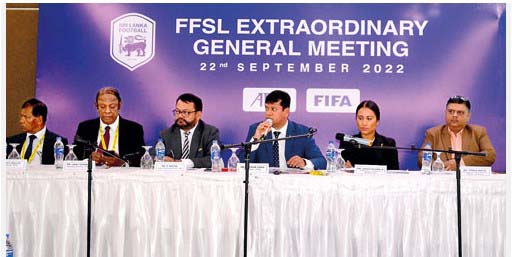 Even though the Football Federation of Sri Lanka (FFSL) established a date for its elective AGM, the Sports Ministry believes the decision is null and void because current members’ terms expired on September 15.

This further intensifies the current crisis, as administration is accused of mismanaging funds and failing to obey FIFA, AFC, and the Ministry of Sports’ directives.

The current FFSL administration adopted new constitutional modifications in the presence of foreign observers at the SGM, however according to the newest development, all decisions and transactions made by FFSL office bearers will be void after September 15.

The FIFA Regional Office Development Manager of South Asia, Prince Rufus, the Senior MA Governance Services Manager of FIFA, Sarah Solemale, and the Head of South Asia Unit Development Department and Governance Department, AFC, Parushottam Kattel observed the SGM. FFSL declared that they have received an extension of their existing term until October 31 through a Special Gazette Notification issued by the Ministry of Sports.

“This is forbidden under sports law. We’ve heard that FFSL officials misled FIFA to get letters supporting their extension of stay, giving false reasons, said Keerthinanda, a legal consultant who helped draught and implement the National Sports Policy, Convention Against Match Fixing Law, Convention Against Doping in Sport, and initial draught of the Sports Act 25 of 1973.

FIFA and AFC approved FFSL’s postponed election on October 23 after the revised constitution was passed with a two-thirds majority despite 13 abstentions. FFSL incorporated new clauses such as awarding three votes for a League instead of one and appointing a three-member election committee. Football analysts stated it was a move to create more divisions inside leagues, as FIFA, AFC, IOC, and other sport authorities allow only one vote.

“The FFSL mission ended on September 15 for us.” We don’t know their decisions, but we do know that the Ministry of Sports should oversee their election. We’re acting legally, and a suitable conclusion will be made according to Sports Law and country law, said Dr. Amal Harsha de Silva, Secretary of the Ministry of Sports.

Several groups within the football fraternity have accused the FFSL administration of’misconduct, mismanagement, and failing to respect transparency with relation to FFSL revenues’ They’re also accused of not following their constitution when holding Executive Committee and Council meetings.

We can’t criticise unfairly, but we can’t ignore mismanagement of their own cash. They should be punished with under the Sports Law because of mismanagement, and their expenditure is permitted by the FFSL Executive Committee, Keerthinanda said.

“We’re forced to go public since the wrongdoings continue. If they were transparent and passionate about the sport, Sri Lanka wouldn’t have lost previous tournaments and wouldn’t be ranked 207. Nothing happened suddenly; it was dragged out since they were elected in June 2017, said Amanullah.

Uncertainty surrounds the October 23 AGM, and with decisions made after September 15 being illegal, the ‘illegal’ FFSL administration may undergo further review before a lawful administration is selected, according to a top Sports Ministry official.

Struggle is Nonstop ! We won’t stop until a just, humble government is in place. Activists