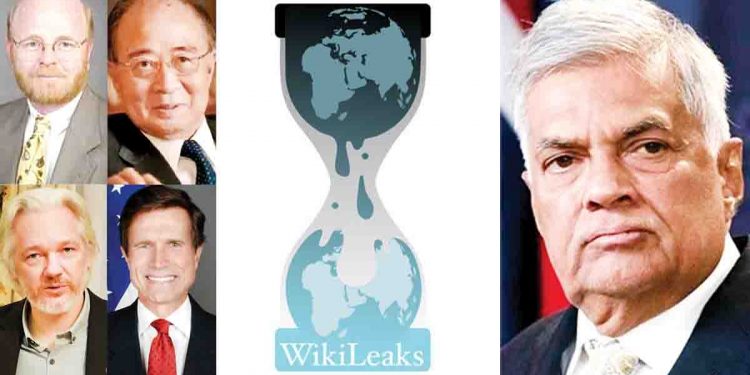 Ranil says to Japan ‘ reject funds to Sri Lanka –
Ranil is a American stooge.
Wikileaks reveals the secret behind the local ‘yankee’

Eagle eyes in the day time. Owl eyes at night. No one who passes through this place can easily escape. We hear about this unique place from overseas. But this organization never has a fixed headquarters.

It is the custom of that special corporation to keep its eyes on the whole world like an eagle or an owl 24 hours a day. Anyway, the work of this institution is done from many countries of the world with a lot of deep insight, that is, they keep their eyes open on every where including Sri Lanka, 24 hours a day with a lot of attention.

A few days ago, a special incident that happened a few years ago came to light. This created much concern not only in Sri Lanka but in many other countries in the world; what is this news?

Wikileaks is the name of this unique institute. objective of this international body is to scan through many sensational matters and secrets and report to the world truthfully. Accodingly this incident has taken place in year 2007; exactly 15 years ago.

A lengthy account of this was released a few days ago. According to the information then the opposition leader of Sri Lanka was Ranil wickramasinghe. The ruling government was the Rajapakses.

The opposition leader has requested then Japanese government not to provide any monitory help to the Sri Lankan government. if Sri Lankkan government make any such request to completely refuse it.

when this incident took place the government of Japan was the famous Shinso Abe’s government which govern Japan for 10 years and was shot dead by some recently. When he was addressing a political rally in Nara city the killer shot Abe and it was reported severl shots were fired at him till he fell down.

Shinsho Abe is a popular figure not only in Japan but world over. He was a very close friend of Sri Lanka as well. Sri Lank declared a day of Mourning the day his funeral was taken in Japan. He was 67 years old at the time of his assassinations.

According to ‘WikiLeaks’ revelations the present president of Sri Lanka when he was the opposition leader in 2007 has requested to deny the financial Sri Lanka requests . The Japanese authorities has replied that the for the disruptive and abductions we should not punish the citizen of Sri Lanka. in 2007 June 05th when Sri Lankan special envoy Susuhki Akashi arrived at here for the 14th visit of his to the island. during his visit what he his special observed was the environment prevailed which was an indication of a breaking nation.

This is quit contrary to his previous tours which he has mentioned at the meeting he had with ambassadors on June 8th. However towards the end of his visit he was slightly optimistic about the the situation here. in this backdrop Mr Ranil wickramsinghe has made his request mentioned above. He had insisted if such aid is being given at the moment to stop it immediately. His reply to Ranil wickramasinghe has been for the acts of commissions and omissions politicians the nation cannot be penalized. However Mr Sushuki Anashi has disclosed the aid programme in several occasion.

Above described is the turning point of the above story. WikiLeaks international bodies truth revealing document mention thus. O Blake who was the American Ambassador in 2007 made a special statement about this incident. However after 15 years this has surfaced once again after Ranil Wickramasinghe was elected president.

WikiLeaks has issued a twitter message to this effect as well which stirred many local and international concerns. Media reports indicates this ‘cable’ message secretly transmitted for the first time by then American Ambassador Robert O Blake. In a forum discussion where special envoy of Japan Yashushi Akasi was a co chairman it has been discussed about Ranil Wickramasinghe incident the ambassador has mentioned.

There is no reference to say the cable had contained many matters with then President Mahinda Rajapakse discussed in WikiLeaks message. Only special reference is made to the present presidents above mentioned incident only. This is a special occurrence.

In 2007, the current President Ranil Wickremesinghe made this heavy statement, and at that time, most of the diplomatic parties expressed their opposition and disgust. Robert A., who was the US ambassador to Sri Lanka at the time, first revealed this incident. Blake served as ambassador from 2006 until the end of the ethnic war in 2009.

He was a very respectable diplomat and before he was posted to Sri Lanka he has served as a assistant foreign secretary in United states. He is 64 years old and hold many positions in state organizations. when he was the ambassador in Sri Lanka did a yeoman service to stop the ethnic conflict in the country. Yashushi Ashaka the Japanese envoy a senior diplomat in Japan.

He discarded a dedicated effort to stop the ethnic conflict and also to help Sri Lanka in its economic turmoil at that time. He is 91 years old now. A number of parties have made their views public about the news revealed by the WikiLeaks International Investigation Agency regarding the current President of Sri Lanka, Mr. Ranil Wickramasinghe.

In this regard, the current opposition leader Mr. Sajith Premadasa has announced the following in a twitter message. Some people in our country believe that we have a president who can make serious decisions and who can consider those decisions to be correct. This is a great example of that. He has tried to score a stupid political point by asking Japan to reject the funds given to Sri Lanka…’ – Sajith Premadasa

The army commander during the war field marshal Sarath Fonseka too issued a twitter message on this.

Did the then opposition leader Mr. Ranil Wickramasinghe make such a request to the Japanese government against the country at a time when the three armed forces led by the Sri Lanka Army, the Civil Defense Force and the Police are engaged in the fight against terrorism? If so, isn’t it not an act of treason against the country?

The people must say with one voice that the traitor Ranil Wickremesinghe, who has no popular power or popular opinion, has no moral right to act as the President of Sri Lanka…’

WikiLeaks has revealed another wonderful story of President Ranil Wickremesinghe, who said that even if the situation is such, many things happen overnight. These statements are made by an American ambassador in Sri Lanka. Mr. Ashley Wills, who was appointed as the US ambassador to Sri Lanka on September 27, 2000 under Chandrika Bandaranaike’s government, had made this statement at that time.

Ranil Wickremesinghe became the Prime Minister in 2001 and Chandrika Bandaranaike was the President from 1994 to 2005. Also, Ranil Wickramasinghe held the position of Prime Minister from 2001 to 2004.

The WikiLeaks news site states that Ashley Wills, the American ambassador, made this statement about Prime Minister Ranil Wickremesinghe on May 29, 2003.. This statement was made by the ambassador to the public administration in Washington. But that statement was later included in the WikiLeaks website as a secret statement. Ambassador Ashley Wills has written about Prime Minister Ranil Wickremesinghe.

Since coming to power in of 2001, Prime Minister Ranil Wickremesinghe has taken steps to turn Sri Lanka’s foreign policy towards America. Wickramasinghe’s pro-American vision and ideas have been in him for a long time.

Also, that philosophy is something that was in the activities of his families. For example, his uncle, JR, who held the position of President of Sri Lanka in the 1970s to 1980s.

Mr. Jayawardena also had very close relations with America. Among leftists in Sri Lanka Jayawardene was known by the nickname ‘Yankee Dicky’. Mr. Ranil Wickramasinghe has very good knowledge about American politics and history. He also has an understanding of the American Civil War and American law. Because of his pro-American views, he often thinks that Sri Lanka should seek aid from the foreign community…’

This secret statement was recently found in the WikiLeaks database and published by the ‘Colombo Telegraph’ media agency. Its headline was ‘Ranil is a Yankee, like his uncle’. Americans are known as ‘Yankees’ in the world. Somehow, this incident also created a wonderful sense of humor.

Among these happenings, there is another wonderful news. That is, when the opposition leader Ranil Wickramasinghe, who told Japan not to provide economic aid to Sri Lanka in 2007, returned to the post of Prime Minister under the good governance government in 2015, the secret information of requesting economic aid from Japan has also been revealed.

In other words, he has requested Japan not only to provide economic assistance, but also to invest in Sri Lanka. He also made an official visit to Japan to meet the then Japanese Prime Minister Shinzo Abe. This information was published in many media at that time.

The WikiLeaks media investigation organization, which searches for secret victims like an eagle by day and an owl by night, is currently considered to be the most important civil media organization in the world in search of confidential information. This organization, which started on October 4, 2006, has a short history of about 15 years.

However, millions of classified documents have been coordinated through this agency. They make public the various confidential information received under a strict legal environment with strict investigation. This agency has millions of secrets in political, financial, criminal, corruption scams, war secrets, money laundering and several other fields.

The most special news of the ‘Wikileaks’ organization is revealed here. That is, the founder of this international organization is Julian Assange, an Australian who is a well-known journalist and media author in the world today. The 51-year-old is an international award-winning investigative journalist. Anyway, Julian Assange was recently arrested and imprisoned for exposing the war crimes and war secrets of the Western powers. He is currently serving a prison sentence in Great Britain.

The court remands a young man sitting on the chair of president and taking photos !